Thirty years on Live Aid model has been transformed

Ultimately, it is long-term social movements not short-term celeb moments that change the world 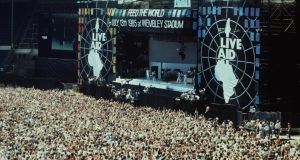 “Thirty years (to the day) since Live Aid and its model of celebrities backing global campaigns, the approach seems alive and well.”... Photograph: Terry Thorp

Celebrities seem super-busy backing big causes this summer: One Direction is backing Action/2015, Chris Martin and Ed Sheeran are lining up for the Global Citizen Festival, Beyoncé and Lady Gaga are backing ONE’s Poverty is Sexist campaign, and Pharrell Williams is organising the Live Earth concerts. Thirty years (to the day) since Live Aid and its model of celebrities backing global campaigns, the approach seems alive and well.

On the face of it this seems very good news. But if you a look a little closer, the model has changed – and for the better.

None of these celebrity-backed campaigns are intended to be big charity fundraising concerts like Live Aid. That historic event raised $235 million, along with the Band Aid single. I have met many in Ethiopia who would not have survived without the food aid paid for with that money.

But now, we know we have to tackle the root causes of poverty and hunger, the structures of injustice that keep the poor, poor. To their immense credit, all of these campaigns and concerts recognise that. All back the shift from charity to justice, and all of them also support the ideals behind the imminent Global Goals for Sustainable Development.

The Live Aid model evolved through the Jubilee Drop the Debt campaign, the Make Poverty History campaign and the Live8 concerts, which demanded a doubling of smart aid to sub-Saharan Africa and deeper debt cancellation as well as trade justice.

At the Gleneagles G8 summit a decade ago progress was made on all these (bar trade). This partnership for development has delivered incredible progress - millions fewer die from preventable disease like HIV/Aids and malaria, and extreme poverty and hunger rates are declining. We may be able to reduce Aids and malaria deaths to nearly zero by 2030 – and maybe even extreme poverty and hunger too.

These efforts succeeded because they married pop culture with sound policy analysis, non-partisan political strategies, and relentless, often unglamorous, follow up work. Bono in particular has excelled at this more unfashionable stuff, meeting world leaders of all political backgrounds, while grassroots campaigners keep up the public pressure.

This “inside plus outside, pop plus policy” non- partisan approach has helped maintain global support for development and poverty eradication through many political transitions, from New Labour to the Conservatives in the UK, Fianna Fáil to Fine Gael in Ireland and from Republicans to Democrats in the US.

Campaigns this summer by One Direction and Ed Sheeran are particularly helpful if they focus media attention and political heat on a vital financing summit in Addis Ababa, Ethiopia’s capital, this week. Indeed it would be a beautiful rhyme of hope and history if the country which was on the receiving end of the world’s compassion 30 years ago could host a summit that agrees to accelerate the end of extreme poverty and hunger.

But we need a further shift. There is a great African proverb: “You can’t cut a man’s hair if he is not in the room”. For too long the super-empowered northern activists and celebrities have spoken to the world’s media on behalf of the worlds most marginalised.

Now with a degree of economic growth, and with the advent of new technology, those once marginalised can speak up for themselves. That means northern NGOs, campaigners and celebrities can and must change their models of programme delivery and public campaigning to put the southern voices more in charge. This isn’t about political correctness but political effectiveness.

There are more and more powerful champions from the global south whose voices people want to hear: Malala Yousafzai, Yaya Touré, Didier Drogba, Angelique Kidjo, Mo Ibrahim and of course Desmond Tutu. What a relief that the most famous spokespeople are no longer Irish.

There’s also a next generation of African voices, such as the Afro-popstars who teamed up for our “Strong Girl” anthem in Africa. The loud northern voice still has a vital role. That’s why One Direction’s contribution for Action/2015 is so great - they are backing a movement led in large part by southern activists. Northern media exposure is important and northern celebrities will achieve that before southern activists. But the big shift must be a better partnership between these voices south and north.

Ultimately, it is long term social movements not short term celeb moments that change the world. But given the challenges faced by people and planet, we cannot afford to squander this opportunity for a bigger better movement for change, and we must ensure the celebrification of this moment is politically effective. What an exciting summer this could be if we succeed.

Jamie Drummond co-founded the advocacy group ONE with Bono. ONE works to end extreme poverty and preventable disease, particularly in Africa.