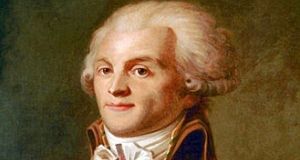 Robespierre. “Even the most extreme Irish Greens have little in common with the Montagnards of revolutionary Paris, I know, except perhaps for the commitment to ideological purity and a disdain for the compromises of electoral politics” Musée Carnavalet, Paris

I don’t know if recent events in the Green Party can be considered a Thermidorian Reaction, exactly, but it’s the right time of year for it anyway. The phrase meaning “a return to more conservative politics after a violent or radical phase” takes its name from the events of late July 1794, a month that had been renamed Thermidor – with doubly-apt connotations of heat – in the republican calendar.

The two-year Reign of Terror under Robespierre and the “Montagnards” came to an end on 9 Thermidor (July 27th in the new money), with the former’s arrest. Then it was his and his loyalists’ turn to face the guillotine, as so many of their suspected enemies had done in the purges. After that, the revolution entered a more settled phase, while also launching the career of an ambitious young army officer named Napoleon.

Even the most extreme Irish Greens have little in common with the Montagnards of revolutionary Paris, I know, except perhaps for the commitment to ideological purity and a disdain for the compromises of electoral politics that led Saoirse McHugh and others to resign in protest at the party’s return to Government. But they and Robespierre share a colour theme at least. As immortalised by Thomas Carlyle some decades later, he was “the sea-green incorruptible”.

Robespierre’s hard-liners were so named because they occupied the “Montagne, ie the higher seats at the National Convention, where they looked down (in more ways than one) on the moderates, who occupied the “Plaine”. Those names have not extended beyond French politics, but the revolution did help spread another parliamentary metaphor, now global, whereby the radicals sat on the “left” of the chamber, while the conservative factions sat on the “right”.

In many modern parliaments, including the Irish and EU, deputies are arranged in a horse-shoe shape, with left and right (or Government and Opposition) at either extreme and a curve where they and the non-aligned can meet in the middle.

As historian Norman Davies points out, “Marxists and other dialecticians” do not like this unilinear arrangement, preferring a “bi-polar” scheme, whereby two systems contend implacably and one must win or lose in the end.

Curiously, the not-very-Marxist British House of Commons has just such an arrangement of benches, eliminating the middle ground as if to discourage the emergence of a third party.

Although both the words “left” and “right” may be used disparagingly by those from the other side, the French “gauche” has all to itself the distinction of being still officially an insult in English. But as seen by the ideological purists, sometimes, the worst place you can be is in the middle. When one of the Greens who quit this week tweeted that the party had a “seedy underbelly of middle-class older centrists”, it was hard to decide whether the first or last word in that sequence was the bigger insult.

The classic French dish lobster thermidor is one of the more benign legacies of the revolution’s most notorious month, although it was not created then or for a century afterwards. It dates from 1891 and was inspired by a play called Thermidor, by Victorien Sardou, which led to a Parisian version of the Abbey riots.

Fiercely critical of Robespierre’s reign, Sardou was congratulated by one admiring critic for the realism with which he had recreated “the howling of the mob, the tocsin, the revolting sayings and jests” of the period. But radical republicans in the audience took offence and staged a recreation of their own, shouting down the actors and threatening the author’s life until police intervened.

The play was subsequently banned for a few years, but in the meantime it had spawned the famous brandy-infused dish, created by chef Leopold Mourier in a restaurant frequented by the cast.

The revolutionary calendar had long been consigned to history by then. It lasted only 12 years, although some latter-day enthusiasts still mark it occasionally. These may well include members of the Green movement, since the calendar was a celebration of nature and the rural economy, mainly, with each day honouring a different plant, animal, or agricultural implement – 9 Thermidor, for example, was the day of the “blackberry”.

In fact, whatever about being called “centrists”, veteran Greens can hardly object to having the adjective “seedy” applied to them.  Seediness is essential to growth after all. In this spirit, the despised moderates of the Irish environmentalist movement may also take some small comfort from the knowledge that the date of Robespierre’s demise, 10 Thermidor, was the day dedicated to the “watering can”.