Theresa May (and Angela Merkel) should play Brexit long game

Mrs May will be told by the Brexiters to get on with it: the prime minister should ignore the pleas 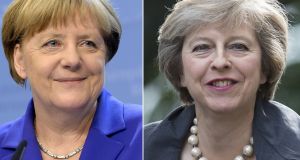 The process of government under Theresa May (right) will become more formal and be better for it. In temperament she is not too far from Germany’s Angela Merkel. Photo credit: OLI SCARFF,THIERRY CHARLIER/AFP/Getty Images

One by one, the rivals to replace David Cameron were found out. Boris Johnson, a chancer who thinks a smattering of schoolboy Latin fair substitute for strategy or principle. Michael Gove, a political sociopath with a manifesto that read like an undergraduate essay. Andrea Leadsom, the hard-right’s unelectable answer to Labour’s far-left, and unelectable, Jeremy Corbyn. After winning the war, the leading Brexiters lost the peace. Theresa May’s stroll into Downing Street offered some hope that Britain has not gone completely mad.

The adage has it that politics always ends in failure. In Mr Cameron’s case it was self-inflicted. He always preferred tactics to strategy. Add an inflated sense of his ability to get out of tight spots and an unhappy ending was inevitable. The big tactical swerve - the promise of a referendum on Europe in a vain attempt to appease Tory Europhobes - steered him, and the nation, into a brick wall.

There was not much dignity, I suppose, in the abruptness with which he was bundled out of Number 10 this week, but then Brexit is the biggest political and foreign policy failure of postwar Britain. The 1956 Suez debacle was a small bump on the road by comparison. The prime minister who took Britain out of the EU and, quite possibly, broke the union of the United Kingdom as a consequence - not a happy epitaph.

Mrs May was the best choice available as his successor. She was on the pro-European side but stayed invisible her during the campaign. Her reputation as a steely, competent home secretary is overdone. She dodged difficult decisions and failed to get a grip on border controls and the enforcement of immigration rules. Her success was surviving in a department more commonly a political graveyard. She has a reputation as a pragmatist and avoids histrionics. The process of government will become more formal and be better for it. In temperament she is not too far from Germany’s Angela Merkel.

The policy vacuum left by the Brexit vote has thus far filled with wishful thinking. On the pro-European side, a cry of pain has been followed by insistence that the result need not be the final word. Lawyers have been hired, constitutional precedents consulted. If the people can decide to say goodbye to their own continent, surely they also have the right to change their mind? After all, buyers’ remorse may set in as the economy slips towards recession.

Among the Leavers there is a let’s-get-on-with-it hubris that says Britain can skip out of the EU the day after tomorrow. It will get a good deal because Germany wants to continue selling its cars and France its wine. Anyway, the latter-day Elizabethans declare, there is a world to be conquered beyond Europe’s troubled shores. A sinking economy? Pro-European propaganda. These are people who invent their own facts.

It is possible, of course, that Britain could decide in the end to remain in the EU or to opt for something close to it such as associate membership. If we have learnt anything these past few weeks it is that politics can turn somersaults. A new prime minister will not change the reality that it will be difficult to secure broad political consent for any one of the many versions of “out”. On the other hand, it is also conceivable, just, that a speedy and good-natured negotiation could see Britain leave on relatively favourable terms.

Politicians must deal in facts and probabilities rather than dreams. The process of unravelling four decades of political and economic integration will be complex, costly and frequently bad-tempered. The Britain that emerges will be weaker economically and have a smaller footprint internationally.

“Brexit means Brexit” is Mrs May’s favourite phrase. It is calculated to offer assurance to Tory Outers who worry about her commitment to withdrawal. It says nothing, though, about the shape of post-Brexit relations. The new prime minister has avoided showing her hand on where she wants to draw the balance between access to the single market and national control of immigration policy. This will be the subject of two sets of negotiations - the first with her own party, where the interests of business will collide with the ideology of Little Englanders, and then with the other 27 EU states. The former may be harder than the latter.

Mrs May will be told by the Brexiters to get on with it: set out your position clearly, trigger Article 50 and wrap up a deal as quickly as possible to put an end to uncertainty. The prime minister should ignore the pleas. The only hope she has of squaring half-a-dozen circles will be to play the negotiations long.

We are living through a period of political and economic upheaval - in Britain and in the rest of the continent. What Mrs May must hope is that over time the politically impossible becomes the possible; that compromises unacceptable today are seen as common sense a year or two hence.

Why should Europe wait? Listen to Ms Merkel. The chancellor quite rightly insists that the EU will not be bent out of shape to accommodate the British. But she prefers deliberation to rushed decisions. She understands it is in Europe’s interest to rescue what can be salvaged from the wreckage and to emerge with relations with Britain on a reasonable footing. She also has an election to fight next year. So does French president François Hollande. Changes to EU-wide migration rules may seem more attractive. A pause might just suit everyone.

Philip Stephens is chief poltical commentator of the FT

1 Mother of McGinley children who were found dead is arrested
2 Miriam Lord: Sinn Féin goes arthouse for Everybody Can Have Everything manifesto
3 Election 2020 fact check: Do banks in Ireland pay no tax?
4 ‘In Ballyhaunis there were Arab people all around me’
5 Gordon D’Arcy: If Farrell can tap into our self-worth, we’re all on a winner
Real news has value SUBSCRIBE