There’s many the slip – An Irishwoman’s Diary on mishaps 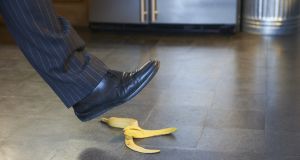 The urge to snack has led to many a mishap. Photograph: Getty Images

If you ever want to feel better about your life choices, you should take a look at some of the strange ways people have injured themselves. These unlucky people will make you feel like you are the boss of the world.

And now that we are all spending more time around the house, some of these stories serve as a cautionary tale of how innocent household items can pose a lethal danger. I’m thinking of the humble duvet cover.

One woman was enthusiastically changing her duvet cover when she accidentally punched herself on the chin, knocking herself out.

Ask the man who slept on his arm, tried to swing the dead arm out of the bed and punched himself in the face.

Even changing those tricky fitted sheets can put your health at risk. Eight years ago, a medical journal reported that a neurologist in North Carolina had come up with the term “sheet-fitting palsy” to describe a condition he had encountered. A 73-year-old woman needed medical care after engaging in what was described as “a Sisyphean struggle” with a truculent fitted sheet. It appears that repeatedly flexing the wrist while you pull a fitted sheet over the corner of a mattress can cause a small blood clot in the artery leading to the hand.

But accidents can happen anywhere in the home. Give a 30-year-old man a pair of new cotton socks and a wooden floor and see what happens. This particular man decided to test the slide-ability factor of the socks by skidding across the floor. He tore his groin and needed two months of physiotherapy. On the plus side, I imagine the floor achieved a beautiful shine.

The urge to snack has led to many a mishap. We all remember the boom time when the hospitals were inundated with people slicing their hands open while trying to peel avocados. But some people don’t need a weapon to injure themselves. Just ask the person who dislocated a shoulder by opening a packet of crisps too vigorously. Or the British goalkeeper Dave Beasant who severed a tendon in his big toe in 1993 when he dropped a jar of salad cream and tried to save it with his foot.

Goalies seem to be particularly prone to strange injuries. Danish sportsman Michael Stensgaard dislocated his shoulder in an encounter with an ironing board, while Paris Saint-Germain goalie Lionel Letizi strained a muscle in his back while picking up a Scrabble tile.

His team did not reveal the letter on the tile but let’s hope it was a Z or a Q to merit the pain.

But other professions are capable of sustaining strange injuries. My all-time favourite injury was recorded by a data scientist who broke his finger by kicking it, behind his back, while dancing like Morecambe and Wise.

It has been a long time since I read his account on a Twitter thread about strange ways to hurt yourself and I still think fondly of him, and his flamboyant dancing technique.

He has some healthy rivalry in the contest for the world’s weirdest injury. A few years ago, US healthcare transparency company Amino studied its database of more than nine billion health insurance claims to highlight some of the stranger causes of injury. The findings did not disappoint.

In 2016, some 400 Americans lodged health insurance claims after walking into a lamppost. An unfortunate 300 more were bitten by a pig. And a very surprising 200 people sought medical care after being struck by a chicken. Not the same chicken, we hope.

A whopping 25,000 people were treated by doctors after walking into a piece of furniture. Surprisingly, no injuries were filed under the medical code V9107XA – burn due to water skis on fire. But the fact that this category of injury even exists suggests that enough people have set their water skis on fire to merit the creation of a medical code for it.

So, remember that danger is lurking everywhere. If you’re tempted to take up hula-hooping during this self-isolation stage, remember the 63-year-old Chinese woman who needed emergency surgery in 2003 after she slipped a disc during a sport of vigorous hula-hooping. She had to have a disc removed.

Don’t step on a rake to see if it actually hits you in the face like it does in the cartoons. It does, apparently. Be careful kissing your dog in case you break your nose.

When you eventually return to the thronging masses of society, never try to flush a public toilet with your foot, unless you want to spend six weeks on crutches.

And finally, as you settle down for the night, watch out for those paper-cuts if you decide that the time to tackle War and Peace has finally arrived.