The wheel deal – An Irishwoman’s Diary on mountain unicycling 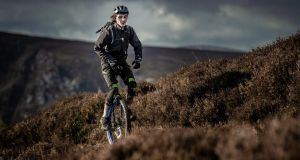 Souryan Dubois. “He got the usual helpful people pointing out that he was missing a wheel or had forgotten his handlebars.” Photograph: Adrian van der Lee

Some of us look at a mountain and wonder how tough it would be to climb it. Others decide to make it more challenging by taking a mountain bike. And then there is an exceedingly small number of people who say ,“Pah, two wheels is far too easy, I’m on my unicycle.”

I thought I was seeing things as I descended the Sugarloaf mountain in Wicklow last year. A young man was nonchalantly riding a unicycle towards the peak. Was this a candid camera moment? Was Mike Murphy going to jump out from behind a rock? But there was no camera crew around and the man continued to merrily wind his way up the mountain.

Thanks to the wonders of the internet I have discovered that this man was probably Souryan Dubois. The French unicyclist spent a year studying in Carlow Institute of Technology and took to the Wicklow Mountains every chance he got. It turns out there is an activity more niche than unicycling and that activity is mountain unicycling.

Speaking from his home in France, Souryan said he spent many happy hours unicycling around the mountains of Ireland. The machines are fitted with a pedal under the saddle, to make the descent more manageable.

He started unicycling when he attended a circus workshop, aged nine, and has been pedalling since. When he arrived in Ireland with his unicycle under his oxter, he hoped to find a community of like-minded enthusiasts. He spotted a unicyclist on a Cork street, and met a Polish unicyclist living here but was forced to conclude, that, like his chosen method of transport, the Irish competitive unicycling community is very compact.

Nevertheless, it was a great way to meet the Irish who were very curious about the machinations of the one-wheeled vehicle. He got the usual helpful people pointing out that he was missing a wheel or had forgotten his handlebars. Like battered shins, the poor jokes are all part of the rich tapestry of a unicyclist’s life.

The wags didn’t realise they were talking to a unicyclist at the top of his game. The 21-year-old took six medals at the last Unicycling World Championships in South Korea, including gold in the 42km race. And he is optimistic for his chances in the next championships which will take place in Grenoble in France next summer.

On a whim last year, he entered the Wicklow Biking Blitz, a 14km mountain bike challenge. Despite having one wheel less than everyone else, and no training for the event, he finished in 89th place, just 20 minutes behind the winner.

Souryan has since finished college and now works in aerospace logistics in France. But when he’s not considering inventory carrying costs, he still longs for Lugnaquilla. “I really miss the mountain trails in Ireland,” he says. “There are no mountains here in my area [on the west coast of France]. I would really love to go back.”

He may also have earned himself a mention in Ireland’s unicycling history, by completing the Wicklow Way on one wheel. It took him five days to travel the 127km route from Dublin’s Rathfarnham to Clonegal in Carlow by unicycle.

If he is looking for the next challenge, it hardly gets much bigger than unicycling around the world. Canadian Wally Watts is widely credited with being the first person to do this. In 1976, he set off on a 43-inch wheel unicycle he built. Two and a half years later, he returned, having broken an arm in Turkey, reupholstered his unicycle seat six times, and pedaled 10,500 miles.

And what do you wear when you are unicycling around the world on one wheel with no handlebars?

A regular pair of jeans, in Wally’s case, with leather patches sewn around the crotch area for added comfort.

Ed Pratt from Somerset took on the unicycle around the world challenge more recently, leaving home in March 2015, aged just 19. Three years and 135 days later, he was back in Britain, having covered 22,000 miles over four continents, and raised £300,000 for a children’s charity. He documented the trip on YouTube with some remarkable camera and drone footage. If you ever wondered what it would be like to ride a unicycle through Manhattan, as taxis and trucks veer into your path, then have a look at the footage captured from the camera on his helmet.

Neither unicyclist entered the Guinness Book of Records for their feats because of the red tape attached to verifying such records, although the book has room for some arguably less-challenging unicycle feats. One person wore 42 hats and unicycled, while another bounced a golf ball on a mallet while unicycling. So, if you are looking for a post-Covid challenge, the Guinness Book of Records award for the fastest unicycle around the world is still up for grabs.

You have nothing to lose but the feeling in your buttocks.