The Virginian – An Irishman’s Diary on Robert E Lee 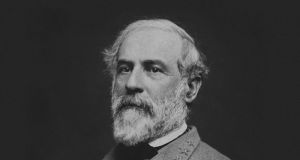 Robert E Lee: known bitterly as the greatest Yankee-killer of all time, he died 150 years ago in October 1870

On the afternoon of April 9th, 1865, Robert Edward Lee, the recently appointed general-in-chief of the armies of the Confederate States of America, surrendered the remnants of the forces he commanded directly, the Army of Northern Virginia, to Union general Ulysses S Grant, at Appomattox Courthouse in central Virginia.

Grant then paroled the badly clothed, emaciated Confederate soldiers and they made their way to their homes, as best they could. In many cases those homes, if they still stood, were in a wasteland. The South’s cotton industry had been almost wiped out, 40 per cent of its livestock had been killed and many of its towns had been destroyed.

Scattered outbreaks of fighting would occur until June but the American Civil War was effectively over. At least 1,500,000 men had fought in the Union armies and about 800,000 in the Confederate armies. Union deaths amounted to more than 360,000 and Confederate deaths to at least 260,000. Put differently, one in 50 of the entire population of the United States died from disease, was killed in combat or succumbed later from wounds, while uncounted numbers were maimed for life.

Four years earlier, on March 28th, 1861, Lee, a 56-year-old officer who had served in the Mexican war of 1846-48 and had been a superintendent of West Point Military Academy, was promoted to colonel.

And on April 18th, six days after South Carolina, the first of the secession states, had ignited the war by bombarding Fort Sumter, near Charleston, President Abraham Lincoln offered him field command of the Union army.

But by then Virginia had also seceded and Lee was first and foremost a Virginian. His people had been there since the 1640s, two of his collateral ancestors had signed the Declaration of Independence and his wife, Mary Custis, owned the 1,100-acre Arlington Estate near Washington.

On April 20th, he resigned his commission and went home to become an adviser to the Confederate president Jefferson Davis, and on June 1st, 1862, Lee was appointed commander of the Army of Northern Virginia in Richmond. But he had no illusions about the war. The Confederacy had no proper military organisation, no currency, poor infrastructure, few arsenals and a widely scattered population, one-third of whom were slaves.

Although he was a committed Christian, he had an ambivalent attitude to slavery. He saw it as a moral and political evil but believed that emancipation would sooner result from “mild and melting influence” than from “storms and fiery controversy”.

The war had three main theatres but a disproportionate amount of the fighting took place in Lee’s bailiwick, the area west of a line between Washington and Richmond. He took part in 10 major engagements and won six, including Second Manassas (Bull Run) in August 1862, Fredericksburg, his greatest victory, in December 1862, and Chancellorsville in May 1863, where his friend Stonewall Jackson was fatally wounded.

But he lost at Antietam in Maryland, in September 1862, and at Gettysburg in December 1863, the bloodiest battle fought on American soil and the turning point of the war.

Meantime, the Union armies took control of the Mississippi, effectively cutting the Confederacy in two, while the Union navy ended the export of cotton, the Confederacy’s major source of revenue, and the forces of Gen William Sherman stormed through Georgia. By the end of 1864 the conflict was a war of attrition, and Lee’s surrender became inevitable when he was forced to abandon Richmond.

He had no connections with Ireland but he had Irishmen in his armies, including a Cork-born general, Patrick Cleburne.

According to the 1860 US Census, 57,000 of the 1,600,000 Irish-born people in the country lived in the 13 states that would secede and at least 20,000 joined the Confederate armies. Most were unskilled labourers and few, if any, owned plantations. Units with significant Irish membership included the Louisiana Volunteers in New Orleans, the Emerald Guards in Alabama, the Charleston Irish Volunteers, the 33rd Virginia Infantry, and the 10th Tennessee regiment.

There is a legend that on the evening after the Battle of Fredericksburg, Confederate Irish soldiers heard Union Irish soldiers across the Rappahannock river singing TD Sullivan’s Song of the Backwoods, Ireland Boys Hurrah, and joined in the chorus.

The Confederate casualties included two sons of John Mitchel, the ex -Young Irelander and nationalist journalist. The outbreak of the war found him editing a newspaper in Richmond and he was an unapologetic supporter of the South, using the specious argument that slaves were better fed and maintained than seamstresses in sweat-shops in New York or Manchester.

A few months after the war, Lee took up the presidency of a small college that traced its origins to a classical academy founded by Robert Alexander, a Presbyterian minister from Manor Cunningham, Co Donegal.

Today, it is Washington and Lee University but its name is under review.

Revealing mother and baby home records
Accommodating breastfeeding at work
Confronting anti-Semitic hate speech
Shared islands, divided opinion
A thank you to Pope Francis
Action on mother and baby homes
How essential is chocolate?
Shared Island Unit is a distraction
Protecting Cork from flooding
When is a pudding not a pudding?