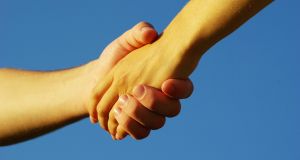 One of the things I love about GAA, still, is the solemn exchange of handshakes between rival supporters at the end of a game. Not everybody does it, I know. In fact it’s probably a minority custom because, usually, the losing supporters have to initiate it. And that’s not easy at a GAA match.

The big drawback of having opposing fans side-by-side for 70 minutes of emotional stress is that there is nearly always at least one member of the opposition within earshot who will gradually, in the popular expression, “sicken your hole”.

He (and it does tend to be he) will fill you with such hatred that, by the final whistle, you’ll have more than enough to spare for his less offensive comrades too.

So when your heroes have failed to exact revenge on the pitch, and the spewer of invective gets to crow in triumph as well, it can take a John Hume-like commitment to reconciliation to turn to the nearest representative of the enemy and offer best wishes for the next round. I know this from long, bitter experience.

Mind you, from where I watched the Monaghan-Tyrone game in Omagh on Sunday, there was only one spewer within earshot.

When something worse happened, he grew less articulate and just foamed at the mouth. It was almost impressive that he could get so worked up

And somewhat to my embarrassment, he was wearing blue.

In his defence, I diagnosed a persecution complex from too many defeats to this opposition over the years.

Hence whenever a Tyrone player committed a routine foul, or went down under anything less than assault and battery, he shouted: “Yiz dirty fucking tramps, yiz are at yer tricks again!”

When something worse happened, he grew less articulate and just foamed at the mouth.

It was almost impressive that he could get so worked up.

By the standards of the fixture, the game was unusually clean, even sporting. And in general, both sets of supporters were rather subdued.

Maybe it was mutual fear, or the soft rain that fell throughout. But I think it was also the cerebral nature of the football.

This was not an occasion for another GAA traditionalist, now facing extinction due to habitat-loss, whose favourite piece of advice to players is “Drive it!”: ie kick the ball aimlessly as far up the pitch as possible and hope a team-mate wins the 50-50.

Here, there was nothing aimless. Both sides retained possession relentlessly, until there was a scoring chance.

Then many of the scores were so skilful that, regardless of which side they were for, you had to be a fanatic not to admire them. Despite this, the Monaghan supporter somehow maintained his tirade throughout. From a Tyrone perspective, he was a Grade-A hole sickener.

My own attempts to hate the locals had been undermined even before throw-in when, as I tried to buy a terrace ticket, a friendly steward gave me a free one somebody had left with him. This despite my jersey: that only encouraged a general exchange of pleasantries.

Then the game happened.

And by the end of that, thanks to the scoreline, I was even further convinced of the essential humanity of Tyrone people.

When a few of them headed for the exits early, I didn’t join the chorus of “Cheerio, Cheerio, Cheerio” from a more youthful part of terrace behind me. I also avoided eye contact, out of respect for private grief.

But then a man of a certain age walked past and, a little awkwardly, turned to face me.

The drive south on Sunday evening was a metaphor for the intervening peace process. A combination of match traffic, narrow roads, and rain made progress painfully slow

This was the moment. He didn’t offer his hand – defeat must have been too raw. He just said “congratulations”. So I tapped him on the shoulder and said “thanks” to his retreating back. Decencies observed, he was gone.

Walking back to the car afterwards, I remembered the sombre anniversary that faces Omagh later this summer. It’s hard to believe the bomb was 20 years ago, but already parts of the town are unrecognisable from the place I spent a grim week in, covering funerals, back in 1998.

The drive south on Sunday evening was a metaphor for the intervening peace process. A combination of match traffic, narrow roads, and rain made progress painfully slow.

Then, in an inversion of the Brexit negotiations, we hit the Border and the tailback disappeared.

But there was a sobering reminder there too, near Aughnacloy, in its own way an example of the new trading opportunities Brexiteers romanticise. It was a small billboard, with a rising sun logo that might have been advertising a local supermarket.

Instead, in this case, it was for Saoradh, political wing of the latest version of the IRA, inviting customers to “Join today”.