The real Enda Kenny remains as elusive and underestimated as ever 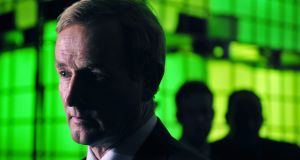 That the documentary was broadcast at all proved its own theme: the constant underestimation of Enda Kenny. Photograph: Aidan Crawley/Bloomberg

Enda Kenny once bought me a pint of Smithwicks and did his JFK impression. It was terrible. Worse than the Smithwicks, which is a watery version of Guinness. Much like Enda once was a watery version of Bertie. It was in the aptly named Ginger Man pub in Dublin 10 years ago. I had just performed on one of Vincent Browne’s last RTÉ Radio One shows, doing the usual Enda shtick. Painfully rigid, pointing at the middle distance and overpronouncing “de pipple” in that way of his.

I was reminded of this odd encounter while watching RTÉ One’s Enda documentary this week. The programme elevated him into some sort of ruthlessly clever and manipulating leader, in between looped shots of a funfair and a Dart station. I think they were suggesting Enda’s career is like a trip to Funderland. Old and kitsch yet keeps showing up year after year against the odds, making everyone roll their eyes and feel nauseous.

They forgot to mention the part where Enda took a nap in Leinster House for 35 years and became Taoiseach through no fault or effort of his own. I started mimicking the “Stiff with the Quiff” in 2004 as a young apprentice on Today FM’s Gift Grub. My Enda was an emotionally constipated pretender, too in awe of Bertie to land any punches. He was frustrated by his inability to muster real feelings, like Anthony Hopkins in Remains of the Day.

By the time I was working alone, doing the very patchy and often juvenile Nob Nation series on the Gerry Ryan Show, Fine Gael’s handlers were doing the satire for me. Frank Flannery, celebrated in the documentary as some sort of shrewd strategist, was handed an open goal in the 2007 election while Bertie was mired in tribunals. He made a bags of it. They stage-managed Enda into a style-obsessed half-wit who needed an autocue to ask where the bathroom was.

It was like they’d never met Enda before and sent him rigid lines written for a talking Tesco checkout. They even changed his hair. I got about a year out of that. They made him say that awful “sign my contract” slogan. Another 12 months. The real man is folksy, good humoured with a culchie steel disguised as eejitry. They stifled his optimistic personality, the one that later made him feel like such of breath of fresh air after grumpy Brian Cowen when Enda fell into office in 2011.

The sissy image created by Fine Gael gave Fianna Fáil an idea. Someone peddled a lie around town near the 2007 election, that Enda had been arrested on Leeson Street dressed as a woman in the early 1990s. I thought it was so hilarious I created “Dame Enda” sketches on radio.

Fine Gael’s press office even complained, which is the best thing that can happen to a fledgling sketch show. Privately though I was mortified. It was rumoured PJ Mara was behind the ruse and I’d helped him get under Fine Gael’s skin. Even though I’d given up journalism for funny voices, which would take years to develop into satire, I always felt Mara was toxic to media. NUI Galway now has a “PJ Mara Scholarship for Journalism”, which makes me sick to my stomach.

I tell this story as spin doctors are so important to Enda’s story. Almost every shot of him in the documentary post-2002 shows a frowny bespectacled man at his side. The show’s biggest misstep was never mentioning him – Enda’s chief handler Mark Kennelly. He looks like the sort of chap who enjoys turning down health insurance claims. PR men such as Kennelly only make the news when their salaries are revealed. That only serves to shield them from greater scrutiny, about how unelected handlers control and steer the Taoiseach.

Kennelly was the man who finally knew how to handle Enda, and often made it hard for guys like me. They disappeared him. “Where’s Enda?” would trend every now and then on Twitter. Vincent Browne’s show had an empty chair in the 2011 election debate. There were no probing one-on-one interviews for almost four years of Enda’s tenure as Taoiseach. Even today, press doorsteps consist of a prepared statement and few questions.

Kenny seemed to vanish during the Siteserv controversy concerning IBRC and Dáil privilege, which was left out of the documentary too. The political press corps has failed to spot how Kennelly is no longer a constant at his boss’ side, signs perhaps of yet another Kenny friendship gone awry.

The series’ problem wasn’t just that it was a radio show with visuals crowbarred in to stop your eyes frosting over; it was its moribund attempt to explore the legacy of a Taoiseach while he remains in office. Imagine they had tried to sum up Bertie based on his first five years? Filming began in the spring when a lot of people felt Enda Kenny would be gone by now. That the documentary was broadcast at all proved its own theme: the constant underestimation of the man.

There wasn’t enough emphasis on the person even most Fine Gaelers believe is his driving force: his wife, Fionnuala O’Kelly. This is because a documentary can’t get the right access when the story is only half finished. Although cleverly scripted with some good soundbites, Enda was an extended Reeling in the Years with no new revelations. At one point Michael Noonan summed it up best when he seemed to say, “I’m not going to tell you the full story now – are you mad?”

1 Leaders’ debate: For one dramatic moment, the Taoiseach is like a rabbit in headlights
2 Chance of snow as Ireland set for cold snap from Sunday
3 Election 2020: Parties warned of ‘insane’ election promises as Varadkar offers Martin coalition
4 A vegetarian and a non-drinker visit Ireland: here’s their verdict
5 ‘I get paid to learn. I couldn’t recommend it enough’
Real news has value SUBSCRIBE