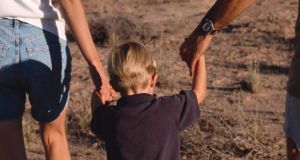 ‘The “No” side in the divorce referendum activated fear about the aftermath of divorce with a TV sequence showing a father and mother swinging a toddler between them as they walked. Suddenly, the father was edited out of the shot, the toddler’s hand, empty, still raised hopefully.’ Photograph: Getty Images

If both campaigns continue as they have up to now, the No side will win the forthcoming Marriage Referendum. At first glance that statement is difficult to understand – the Yes side have a lead in the polls, cross-party support and, bluntly, the media behind them.

This referendum won’t be won by logic and scientific studies but rather by what the Greeks called pathos: the appeal to people’s emotions. At the moment the Yes side just doesn’t have an argument with sufficient pathos. Essentially, we’re being asked to support the referendum because equality is a “good thing”.

Children being forced to grow up deprived of either a mother or a father is what the No side is threatening. It’s bundled with the idea that mixed gender parents is a human rights issue and that there’s evidence that outcomes are better in that structure of family. Logically, the argument falls down – there is no such human right, the evidence on outcomes is less than definitive and this referendum isn’t about adoption rights anyway.

Intellectually, the argument is flawed. Emotionally it’s brilliant and effective. And it has worked before. The No side in the divorce referendum activated fear about the aftermath of divorce with a TV sequence showing a father and mother swinging a toddler between them as they walked. Suddenly, the father was edited out of the shot, the toddler’s hand, empty, still raised hopefully. The message was clear: divorce means that fathers will disappear from their children’s lives. The outcome was a tiny majority (50.2 per cent) for something which in theory could have been carried by a far greater majority.

To win, the Yes side will need to follow traditional rhetorical techniques and tell a story that emotionally connects with the floating voter. Even Islamic State has managed to tell a story that does that to their target audience of disaffected young Muslims. It persuades them to leave their homes, join their brothers and build the caliphate.

Current affairs discussions have often been characterised on the part of Yes spokespeople by a baffled contempt for the No side. Spokespeople for the Yes side have frequently spoken to and about those from the No side as if they were subhuman bigots. That reinforces the convinced Yes voter, but it further alienates the floating potential No voter. The sporting advice of playing the ball not the man applies here.

As for the media, even if the perception is that they support the Yes vote, the fact is the broadcast media have to broadcast balanced discussions. That doesn’t mean balanced according to the opinion polls but split 50-50. So the group that’s behind in the polls actually benefits from this “balancing” by getting a disproportionate share of air time.

This can help contribute to what Americans politicos call “Big Mo”. The “Mo” is momentum. And what that phrase means is the disproportionate impact of voters changing their minds and polls shifting. Once people start moving in one direction, many more tend to follow.

Right now Yes campaigners are handing wins to the No side and often appear to have no idea they have done it.

Take the example of the PR “disaster” that befell Bishop Kevin Doran. His suggestion that gay people raising children were not necessarily parents came close to articulating a view that could yet prove a tipping point. He quickly apologised and withdrew what he had said, but the reality of every courtroom is that while a judge may instruct a jury to disregard a statement made by either counsel, intellectual acquiescence does not equate to actual forgetting.

Opinions are formed by what people remember, especially if, when first uttered, the statement rang an emotional bell with them. In that context, the suggestion voiced by the bishop may have been rejected by other bishops and speedily withdrawn, but it would be an overconfident Yes campaigner who isn’t concerned that the effect of the original comment may be disproportionately large, partly because it was immediately defined as unacceptable. People who believe their values are under attack are not interested in the definitions of others.

Trinity College Students’ Union’s “Ring your Granny” campaign is a good example, where students chatted with their parents and grandparents about the referendum and voting Yes. However, persuading your granny is one thing. The trick is getting her to make a few calls to persuade her peers, too.

In logic the Yes side is winning. In pathos, not so much. Eoghan McDermott is a director of The Communications Clinic and head of training there. Twitter: @EoghanMcDermott

1 Maureen Dowd: Biden has his limitations but he’s no Trump
2 US passengers fly into Dublin: ‘I’m here for six days. I guess I’ll have to stay inside’
3 Keith Duggan: Bubba Wallace tweet shows just how troubled Donald Trump’s mind is
4 Forget bulging muscles; strength is all about nerves
5 Quarantine process to be tightened as health officials grow nervous
Real news has value SUBSCRIBE