The man who took on the pope: The story behind the Viganò letter 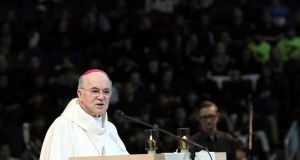 Archbishop Carlo Maria Vigano speaks during an anti-abortion youth Mass at the Verizon Center in Washington in 2015. File photograph: Gregory A Shemitz/Reuters

Two Wednesdays ago, Archbishop Carlo Maria Viganò showed up at 9.30am at the Rome apartment of a conservative Vatican reporter with a simple clerical collar, a Rocky Mountains baseball cap and an explosive story to tell.

Archbishop Viganò, the former chief Vatican diplomat in the US, spent the morning working shoulder to shoulder with the reporter at his diningroom table on a 7,000-word letter that called for the resignation of Pope Francis, accusing him of covering up sexual abuse and giving comfort to a “homosexual current” in the Vatican.

The journalist, Marco Tosatti, said he had smoothed out the narrative. The enraged archbishop brought no evidence, he said, but he did supply the flair, condemning the homosexual networks inside the church that act “with the power of octopus tentacles” to “strangle innocent victims and priestly vocations”.

“The poetry is all his,” Tosatti said.

When the letter was finished, Archbishop Viganò took his leave, turning off his phone. Keeping his destination a secret because he was “worried for his own security,” Tosatti said, the archbishop then simply “disappeared.”

The letter, published Sunday, has challenged Pope Francis’s papacy and shaken the Roman Catholic Church to its core. The pope has said he will not dignify it with a response, yet the allegations have touched off an ideological civil war, with the usually shadowy Vatican backstabbing giving way to open combat.

The letter exposed deep ideological clashes, with conservatives taking up arms against Francis’s inclusive vision of a church that is less focused on divisive issues such as abortion and homosexuality. But Archbishop Viganò – who himself has been accused of hindering a sexual misconduct investigation in Minnesota – also seems to be settling old scores.

As the papal ambassador, or nuncio, in the US, Archbishop Viganò sided with conservative culture warriors and used his role in naming new bishops to put staunch conservatives in San Francisco, Denver and Baltimore. But he found himself iced out after the election of Pope Francis.

Then in 2015, he personally ran afoul of Francis. Archbishop Viganò’s decision to invite a staunch critic of gay rights to greet the pope in Washington during a visit to the US directly challenged Francis’s inclusive message and prompted a controversy that nearly overshadowed the trip.

Juan Carlos Cruz, an abuse survivor with whom Francis has spoken at length, said the pope recently told him Viganò nearly sabotaged the visit by inviting the critic, Kim Davis, a Kentucky clerk who became a conservative cause celebre when she refused to grant marriage licences to same-sex couples.

“I didn’t know who that woman was, and he snuck her in to say hello to me, and of course they made a whole publicity out of it,” Pope Francis said, according to Cruz.

“And I was horrified and I fired that nuncio,” Cruz recalled the pope saying.

Now, three years later, Viganò appears to be trying to return the favour.

Known for his short temper and ambition, Viganò has clashed with superiors who stunted his ascent in the church and has played a key role in some of the most stunning Vatican scandals of recent times.

After one church leader shipped him out of the Vatican to America, thwarting his hopes of receiving a scarlet Cardinal’s hat, Viganò’s private 2011 memos – many of them deeply unflattering to the leader responsible for his ouster from Rome – were leaked and splashed around the globe.

Supporters of Viganò, who did not return a request for comment, bristle at the notion that his letter calling on the pope to resign represents the fury of a disgruntled excellency. They portray him as principled and shocked by what he sees as the destruction of the church he loves.

Tosatti said the archbishop had explained to him that, as a bishop, he felt a deep responsibility to the church and that, as a 77-year-old, he wanted to clear his conscience for when his moment came. But he said the archbishop was also infuriated by a recent article in the Italian press sympathetic to Pope Francis and critical of his predecessor, Pope Benedict XVI – and felt he needed to retaliate.

Viganò is well versed in Vatican infighting. In 1998, Viganò became a central official in the Vatican’s powerful secretary of state. In the letter, he writes that his responsibilities included overseeing ambassadors out in the world, but also the “examination of delicate cases, including those regarding cardinals and bishops.”

It was then he says he first learned of the abuses committed by Cardinal Theodore E McCarrick, the American Catholic leader whose history he says Pope Francis knew about for years – and covered up.

In 2009, Viganò was moved to the Governorate of the Vatican City State, a job with less influence over Vatican policy but with power over some of its revenue.

Known as parsimonious, he turned Vatican City’s deficit into a surplus. But his hard-management style prompted complaints, and anonymous emails alleging he was inappropriately promoting the career of his nephew began making the rounds in the Vatican. His style and rigour on vetting Vatican contracts also bothered some leaders, including secretary of state Tarcisio Bertone, and an anonymous report in the Italian newspaper Il Giornale claimed he had designs on the Vatican’s security services.

Cardinal Bertone, who Viganò writes in the letter “notoriously favoured promoting homosexuals”, banished him to the US.

Throughout his power struggle, Viganò had written urgent appeals to Benedict to stay in the Vatican.

He said he needed to stay because his brother, a Jesuit biblical scholar, was sick and needed care, and he accused Bertone of breaking his promise to promote him to the rank of cardinal.

In 2012, when he was already in the US as nuncio, or ambassador, the letters started appearing in leaks eventually pinned on the pope’s butler. The scandal consumed the Vatican and prompted intense blowback.

But Viganò’s brother, Lorenzo Viganò, told Italian journalists that his brother “lied” to Benedict that he had to remain in Rome “because he had to take care of me, sick.” To the contrary, he said he had lived in Chicago and was fine and had not talked to his brother in years over an inheritance dispute.

Viganò maintained his position as ambassador in the US after the election of Francis. But in the letter published Sunday, he alleged the former Cardinal McCarrick “orchestrated” the selection of bishops blinded by a gay ideology that he blames for the sex abuse crisis.

Yet Viganò has been accused of covering up misconduct as well. According to documents disclosed as part of a criminal investigation into the St Paul-Minneapolis Archdiocese, he ordered bishops in April 2014 to quash an investigation into accusations that Archbishop John Nienstedt engaged in sexual misconduct with adult men and adult seminarians.

After angering Francis during the Kim Davis episode, Viganò was called back to explain himself in Rome, where in a sign of his designs to return to Rome, he refused to give up his Vatican apartment. Reports in the Italian media this week asserted that after removing Viganò from his position, Pope Francis also kicked him out of his Vatican apartment.

And he returned this summer to get working on the letter.

About a month ago, Tosatti said he received a call from the archbishop, asking if he could meet with him in a discreet place. Viganò told the reporter his story, but said he was not ready to go on the record.

But when news of decades of widespread clerical abuse in Pennsylvania broke, Tosatti urged the archbishop to tell his story. On August 22nd, he returned, this time with a written statement.

Tosatti said that he saw no documents or other evidence, and after three hours, they finished.

The archbishop asked Tosatti if he knew anyone who could publish it in English and Spanish. Tosatti sent the letter to the National Catholic Register, which is owned by a company that runs several conservative Catholic platforms critical of Francis.

“They are all tied,” said Tosatti, who said he alone helped draft and distribute the letter.

Its publication was delayed, not so that it would blow up Francis’s trip to Ireland amid the sex abuse crisis, he said, but so that it could be translated.

After they were done writing it, Tosatti said he accompanied Viganò to the door and bowed to kiss his ring, only to see him pull it back.

Tosatti explained that it was not a personal respect he wanted to show, but respect for his office and authority.

“It’s not for you,” Tosatti recalled telling him as tears welled in the archbishop’s eyes. “It’s for the role you have.”

The archbishop told him, “Now that I have finished, I can leave, and leave Rome, too,” according to Tosatti.

“Where will you go?” Tosatti recalled asking.

“I will not tell you so that when they ask you, you will not have to lie – and I will shut off my phone,” the archbishop said, according to the reporter, who said that both men suspected the Vatican of tapping their phones. – New York Times service

1 Why you still can’t have European holiday this summer. Or can you?
2 Donald Trump’s political success is based on racism
3 Pubs reopening will not mean ‘fellas having a few pints and peanuts’, Holohan warns
4 Oliver Callan: ‘I was a perfect candidate for exploitation’
5 Ireland earns ‘right to be hopeful’ again as Government fast-tracks plans to reopen country
Real news has value SUBSCRIBE