The Irish Times view on Myanmar: the world must act 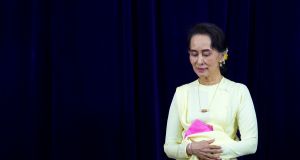 Hard questions must be asked of Myanmar’s de facto leader, the Nobel peace laureate Aung San Suu Kyi, who has been disgracefully silent on the plight of the Rohingya. Photograph: Ye Aung Thu/AFP/Getty Images

In a campaign of horrific violence against members of the Muslim Rohingya minority, Myanmar’s security forces systematically murdered, tortured, gang-raped and enslaved civilians. They assaulted children and set fire to entire communities, razing villages and forcing families to flee across the border into Bangladesh. These are among the shocking conclusions of the panel of United Nations investigators charged with establishing the facts surrounding Myanmar’s military campaign in Rakhine state, where the Rohingya group is concentrated. “The crimes in Rakhine state, and the manner in which they were perpetrated, are similar in nature, gravity and scope to those that have allowed genocidal intent to be established in other contexts,” the panel’s report states.

Myanmar’s Rohingya have long suffered persecution at the hands of a state that stripped them of their citizenship in 1982 and forces them to live in appalling conditions.

The fact-finding mission recommended the UN Security Council implement travel bans and asset freezes against those who have violated international law. The UN should refer the matter to the International Criminal Court, or a specially-created international criminal tribunal, it stated.

The investigators also sharply criticised Facebook for letting the platform be used to incite violence and hatred. The social media giant responded on Monday by announcing it was blocking 20 Myanmar officials and organisations found by the UN panel to have “committed or enabled serious human rights abuses”. It’s a bit late now.

Hard questions must be asked of Myanmar’s de facto leader, Aung San Suu Kyi. She has been disgracefully silent on the plight of the Rohingya, and her response to the atrocities has been woefully inadequate. In the wake of the UN report, Archbishop Desmond Tutu issued a message to Suu Kyi: “If the political price of your ascension to the highest office in Myanmar is your silence, the price is surely too steep”. But speaking out is no longer enough. Suu Kyi must now be held accountable for the crimes of the state she leads.