The Irish Times view on the Brexit trade talks: limbering up for round two 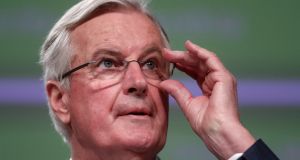 EU chief Brexit negotiator Michel Barnier made clear that the EU would insist the the UK maintained standards in key areas if it wanted tariff-free access to the EU single market. Photograph: Olivier Hoslet/EPA

It is just a few days since the UK – finally – left the EU and already tensions are rising again. Both sides set out their stall earlier this week, the EU via the publication of draft negotiating guidelines and UK prime minister Boris Johnson in a keynote speech. Johnson underlined that the UK had no intention of following EU rules in the future. Meanwhile EU chief negotiator Michel Barnier made clear the EU would insist that the UK maintained standards in key areas if it wanted tariff-free access to the EU single market.

There is a need for some caution here in interpreting what is happening. Both sides are limbering up ahead of talks which will not start in earnest until March. We have seen before how the UK prime minister can change tack and also how the EU can adjust. And behind the initial statements there is some room for compromise. For example, Johnson said that the UK had no intention of slashing standards in areas like employee rights and the environment, a key concern of the EU.

Yet there is cause for some concern too. It is now clear that what the UK has in mind, at least initially, is a fairly limited free-trade agreement which would offer tariff-free trade, but not remove potentially damaging checks, controls and bureaucracy. Even if agreement was reached on such a deal, the additional costs for businesses and consumers here could be significant.

Johnson’s approach also increases the risk that no deal will be done before the deadline and that the UK will move straight to trading under World Trade Organisation rules. After all, if the agreement being sought by both sides offers limited gains, the losses of not doing a deal at all are lower. As in the first stage of Brexit, Ireland is exposed here, albeit not in exactly the same way as if the withdrawal agreement had not been signed. Were the UK to exit without a trade deal, the estimates are that the economic cost to Ireland would be roughly twice what would occur if a trade deal was done. Sectors like the food industry would be particularly exposed.

In the event of no trade deal, the risk of checks and controls at the Border would be averted by the withdrawal agreement, which says goods must be controlled as they cross the Irish Sea into Northern Ireland. However, the new regime of checks is causing nervousness in Northern Ireland. How it works has still to be outlined - Ireland will have an important role in these talks - and the necessary controls will have to be put in place.

Given the apparent reluctance of Johnson’s government to even accept that it has signed up for these checks – and Barnier’s insistence that this commitment must be adhered to – there is plenty of scope for debate and uncertainty to come.