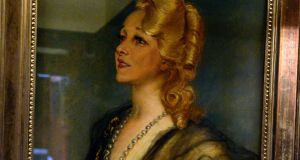 An Italian artist made a home for himself in Ireland in the 1940s. Today his portrait of Ireland’s first president, Douglas Hyde, hangs in Áras an Uachtaráin. The artist’s name was Gaetano de Gennaro.

Born in Naples in March 1890, his parents died when he was young and he went to live with family friends in the city of Grenoble in southeastern France.

After attending art school in Nice, he travelled to Paris, where he prolonged his studies and then pursued his artistic career.

Arriving in Ireland from London sometime around 1940, de Gennaro set himself up as a portrait painter. He sketched and painted fellow artists, singers and actors, as well as ordinary folk. He lived in Fitzwilliam Square and also kept a studio in the Georgian garden square.

Irish critics praised his work with pastels. Following the opening of one of his exhibitions in April 1941, a critic in The Irish Times said that de Gennaro had “singular facility in the use of pastel” and that he was “a painter generously influenced by the art tradition of his native land”. Meanwhile, another newspaper hailed him as “a craftsman of a very high order” and “one of the best portrait painters who has exhibited in Dublin in a long time”.

While he became famous for his work in pastel, he also worked in oils and crayon and produced landscapes and still-life. His work was shown at the Royal Hibernian Academy Exhibition and he also held regular exhibitions in the Shelbourne Hotel in Dublin and the Imperial Hotel in Cork. In a sign of his popularity, when one exhibition of his work opened at the Shelbourne in April 1943, a journalist remarked that “the rooms were crowded, and it was impossible to view the portraits”.

He was renowned for painting the beau monde. His portrait of the actress Ria Mooney, which now hangs in the Abbey Theatre, has been described as follows: “it shows, in shocking bright colours, a rounded, beautiful Mooney as the Widow Quin in 1943”. It is in the backstage area and is only visible to the actors and the backstage crew. Other theatres in the capital can also boast de Gennaro paintings of some of those who performed on their stages. His portrait of the opera singer Margaret Burke Sheridan adorns the walls of the Gaiety. It was reproduced on a postage stamp issued by An Post in 1989 to mark the centenary of the birth of the Mayo-born singer.

Portraits of fellow artists include one of his friend, Seán Keating. This is now kept in the National Gallery, while his half-length crayon sketch of Jack B Yeats is in Lissadell House in Sligo. His painting of the Kerry-born sculptor Jerome Connor was praised as showing “a grasp of the masculine character”.

De Gaetano was one of only four artists to paint a portrait of Douglas Hyde while he was in office. The others were Seán O’Sullivan, William Connor and Leo Whelan.

Like his friend Seán Keating, and many other artists and writers before him, de Gennaro was drawn to the west of Ireland. In 1943, he spent eight weeks on the smallest of the Aran Islands, Inis Oírr. The result of this time was a collection of almost 50 paintings that capture quintessential scenes of island life and faces of some of the local people that demonstrate why it was such a draw for artists and writers.

He immortalised the island poet Micheál Ó Meachair in a colour portrait. Another colourful painting, An Seanachaí, shows a small gathering of people sitting around a fireside enraptured by the tales of a storyteller. The men are wearing pampooties, the traditional foot covering of the islands’ men folk at the time. In another, this time a landscape, fishermen are shown plying their trade off the coast of the island as upturned currachs lie in the foreground. He exhibited these paintings at an exhibition entitled Studies of Inishere in the Shelbourne Hotel in November 1943.

Apart from his sojourn on the Aran Islands, he also travelled to Kerry where he painted landscapes and Donegal, where he is reputed to have done tapestries for the cathedral in Letterkenny.

He made his way to Carlow, where he stayed with the Donnelly family in Dunleckney Manor in Bagenalstown and painted the portrait of each of the family members. His colourful art certainly added to the gaiety of the nation.

However, the Neapolitan artist did not make a permanent home for himself in Ireland. He left in 1946 and moved to São Paulo in Brazil where he took up an appointment as professor of art. He died there in May 1959.