The art of reduplication: a willy-nilly helter-skelter through dictionaries

If the Japanese declutterer Marie Kondo has her way, you would have only 30 books 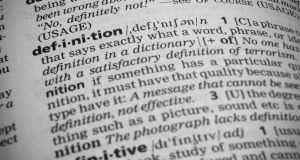 The internet, by and large, does not allow you to graze around the word-meadow to the same degree as books do. Photograph: iStock

With the second decade of the 21st century rapidly drawing to a close, one of the burning questions from the world of literature often asked these days is: what is the future of dictionaries and have they reached the end of their shelf life?

If the Japanese declutterer Marie Kondo has her way, you would have only 30 books. This figure is anathema to professional writers and journalists, many of whom can point to a small army of manuals which have guided them through the intricacies and nuances, as well as the pleasure and torture of the English language. They include thesauruses, encyclopaedias and works such as The Concise Oxford Dictionary, Collins, Chambers, Brewer’s Dictionary of Phrase & Fable, Fowler’s Modern English Usage, and books on allusions, antonyms, homophones, idioms and synonyms.

Possessing them is not simply a question of them sparking joy – which they do – but for most writers they are an essential part of their toolkit. A swathe of other books show how to get words in the right order, improve creativity, avoid dangling modifiers, boost eloquence and help with grammatical footwork.

Some clear up punctuation problems or mistakes that arise over “language mechanics” such as hyphens, commas and the diminutive semicolon or colon.

In a tribute to the writer Hugh Mcllvanney, who died in January 2019, an editor told of his concern over a sports report not meeting a looming deadline. The editor phoned to ask how his piece was progressing and was told by the writer that he was having a problem with his colon. When he expressed sympathy, Mcllvanney pointed out that there was nothing wrong with his long, coiled, tube-like organ that removes water from digested food, but that he was agonising over whether his final sentence should be better served by a colon or a semicolon.

Although online sites throw up helpful detail they lack the serendipity of discovering arcane information which comes from a freewheeling browse through tactile pages.

The internet, by and large, does not allow you to graze around the word-meadow to the same degree.

One area in which Brewer’s is especially strong is in explaining how certain phrases with a long pedigree have come about. The technique of reduplication, the process where words are created by partial or complete repetition, is set out. This involves doubling a sound or word element which is why they are also called “ricochet” words.

Examples include dilly-dally, fuddy-duddy, razzle-dazzle and willy-nilly. And although it has been around for decades, easy-breezy (light-hearted or relaxed), has just been included in the new edition of the Oxford English Dictionary. Dipping further into this, shows that Shakespeare invoked handy-dandy (Lear to Gloucester in King Lear), hugger-mugger (Claudius to Gertrude in Hamlet) and skimble-skamble (Hotspur to Mortimer, Henry IV Part I ).

Reduplicative words have a suggestion of jingly disorderliness and often involve an opening H sound: harum-scarum, helter-skelter, higgledy-piggledy, hodge-podge, hoity-toity, hubble-bubble and hurly-burly. The phrase used by a magician to hoodwink the audience, hocus-pocus (possibly a contraction of hoax), is thought to be a corruption of hoc est corpus meum, the Latin words said while the host is raised at the climax of the Mass. Less precise reduplicative resemblances occur in hunky-dory or walkie-talkie. Roald Dahl enjoyed using them. The “telly-telly bunkum box” is surely much more expressive than “television”. Another Dahlesque invention was the Oompa-Loompas who originally came from Loompaland and worked in Willy Wonka’s factory in exchange for chocolate. As the print incarnation of the traditional dictionary falls into decline, true littérateurs will mourn its disappearance as part of the thrill of etymological pursuit, revelling in its randomness, delighting in its diversity and enjoying the energetic power of holding it in your hand.

But these cumbersome tomes can appear as monuments to a different era. Many now reflect on the amount of time they have saved from not having to dust them, never mind putting your back out shifting them.

All the while, the savvy-clicking, clutter-free writer scrolls effortlessly through a pdf on the quest for more reduplicated phrases which are often regarded as wishy-washy or may even give some the heebie-jeebies.