The art of potatoes – An Irishman’s Diary about Patrick Kavanagh, Antoine-Augustin Parmentier, and an exhibition at Imma 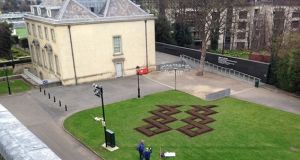 The plot is the creation of Clare artist Deirdre O’Mahony, with spadework courtesy of the Loy Association Ireland. Photograph: Grizedale Arts/Imma

Having myself dabbled in the medium as long ago as 1976, I am not sure that one of the latest installations at the Irish Museum of Modern Art (Imma) can be defined as “modern” art, exactly. Even so, I welcome the recent addition to the museum grounds of a potato plot, and I look forward to seeing how it develops. The plot is the creation of Clare artist Deirdre O’Mahony, with spadework courtesy of the Loy Association Ireland. And described as a “research project”, it is said to be “exploring notions of traditional knowledge, self-sufficiency, and relationships between agriculture and identity”.

As to what will emerge from it later this year – plot spoiler alert –– there are two varieties planted. One is the Bloomer, a white-flowering heritage potato traditional to Clare. The other is the Sharpo Blue Danube – noted, despite the name, for purple flowers.

In case readers are still wondering, my own early work with potatoes involved Kerr’s Pinks, mainly, although I had a Golden Wonder period too, a bit like Klimt. But the Imma exhibit also set me thinking about my fellow Monaghan spud-picker Patrick Kavanagh, who would have enjoyed the humble plant’s belated elevation. When Kavanagh made his poetic debut in this newspaper, circa 1940, it was with Spraying the Potatoes. The subject matter was duly lampooned on the letters page by a pseudonymous wag, who urged The Irish Times (“tireless champion of our peasantry”) to commission further such poems, and suggested “inflamed goat udders” and “warble-pocked shorthorn” as possible themes.

The author of that and other skittish letters was the real-life Brian O’Nolan, soon to be better known as Flann O’Brien and Myles na gCopaleen, and soon to know better than to mock Kavanagh.

Within months, the poet’s contributions to the paper had expanded to (ferocious) art criticism. And by the time he verbally machine-gunned participants in the 1941 Royal Hibernian Academy exhibition, Myles’s attitude had evolved towards nervous respect. He would not be so quick to scorn the confluence of art and potatoes thereafter.

What he or Kavanagh would have made of Deirdre O’Mahony’s exhibit, I don’t know. But its subterranean treasures aside, there is more to her plot than meets the eye. It requires aerial viewing, for example, to reveal the drills’ decorative pattern – inspired, according to O’Mahony, by the Celtic ornamentation of 19th-century Gaelic Revivalist Margaret Stokes. Then there is the reference to Imma’s setting, in the old Royal Hospital Kilmainham, which is where the plot really thickens. Inspired by Les Invalides in Paris, the RHK was built in the 1680s, when the potato was already on its way to becoming a staple in Ireland.

But on most of the Continent, it was considered fit only for animals. Thus when the French military chemist Antoine-Augustin Parmentier was first fed potatoes, as a prisoner of the Prussians in 1763, it was considered inhumane treatment in France.

Parmentier, however, went on to become the vegetable’s greatest champion, persuading the Paris Faculty of Medicine to declare it edible in 1772 and thereafter embarking on an ingenious promotional campaign to secure public trust.

This included hosting high-profile dinners at Les Invalides, where his recipes secured celebrity endorsement. But in a stunt of which any marketeer would be proud, he also once placed a potato garden under armed supervision, suggesting the crop’s value, and then encouraged the soldiers to accept bribes for facilitating theft of it.

His work might have suffered a mortal setback when it received royal approval in – of all years – 1789. But unlike the French monarchy, the potato survived, being embraced as a people’s plant and becoming a semi-official food of the revolution. During the first Paris Commune of 1795, it was grown even in the Tuileries Gardens. So by the time of Parmentier’s death, the tuber was safely ensconced in French cuisine, which has several dishes named after him.

Back in Imma, meanwhile, the spud’s revolutionary credentials will also be on show this summer, adding a late contribution to the 1916 centenaries. This particular tribute will be to the Suffragettes, and the Bloomer potatoes will play a key role.

They of course share their name with a 19th-century feminist, Amelia Bloomer, who became synonymous with the idea that women should wear whatever they wanted (even, gasp, trousers). So this July, in her honour, the Clare potatoes will hang our their natural laundry. Combined with the leaves and the Blue Danubes, the result should be the colours of the suffragette movement – purple, white, and green.

1 Dublin man may have been stabbed to death by woman in parking space row
2 Irish in Italy on coronavirus: ‘The city is in a bit of panic – the streets are empty’
3 Irish in Tenerife contact department over coronavirus concerns
4 Fintan O’Toole: If murderous dissidents are wrong, so was Provisional IRA
5 First Irish rubella case for over a decade confirmed in Cork
Real news has value SUBSCRIBE