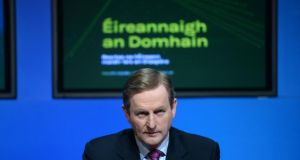 Taoiseach Enda Kenny: “My commitment to the Irish people is that, under this Government, we are never going back.” Photograph: Dara Mac Dónaill/The Irish Times

Four years ago today, in the face of an unprecedented crisis, a new Government was formed with a mandate from the Irish people to fix the public finances and get our country working again.

It’s been a very difficult journey for our people, but thanks to their sacrifices and hard work, our country is now recovering.

But I know that Irish people are more interested in the future than in the past. They know that the economic recovery remains fragile and incomplete, and want and deserve a solid foundation on which to plan their futures.

Most are only just beginning to feel the benefits of recovery, and many have not yet felt any benefits at all and still struggle to pay the bills. All remain nervous about the risks ahead and the danger of slipping back.

My commitment to the Irish people is that, under this Government, we are never going back. In our spring economic statement next month, the Government will set out a five-year plan to 2020 to secure and strengthen the recovery.

At the heart of that plan will be a commitment to protect the hard-won restoration of our national competitiveness and stability in the public finances.

By doing so, we will ensure that more and more people – in every part of the country – start to experience the economic recovery in their daily lives.

Job creation will remain our top priority. We aim to return the country to full employment by 2018, and keep it there.

Jobs are at the heart of social repair. They provide people with purpose, financial independence and the opportunity to provide for their families and contribute to their communities. More jobs generate the resources to fund better services and reduce taxes on those already at work. More jobs mean the opportunity for our brothers, sisters and children to come home.

By next year, there will be more Irish people returning home to take up employment than there will be leaving. By 2018, we will have replaced every job lost during the recession with new, more sustainable jobs and there will be a job for everybody who needs one.

Our plan will target steady growth, about 3 per cent a year, not boom and bust. Steady growth of this nature will eliminate the remaining deficit and bring Government debt down to below average European levels without any new taxes or charges, while also allowing for tax reform and targeted improvements in education, childcare, health services and frontline policing.

We are never going back to the “when we have it, we spend it” approach to budget management of previous Governments. To avoid repeating Fianna Fáil’s mistake of using temporary growth spurts to make reckless spending commitments that then have to be reversed, our plan will cap annual spending growth below the underlying growth rate of the economy.

What was unsustainable during the Celtic Tiger – public sector pay hikes without reform, a narrow tax base, the proliferation of quangos, a welfare system that perpetuated joblessness and poverty – is still unsustainable now. The outlandish spending commitments from the Opposition parties suggest they have learnt nothing from the mistakes of the past.

Our plan will offer fair rewards for hard work, not quick profits for speculation. We will end the discriminatory tax treatment for the self-employed and small businesses, starting in the next budget. But we are never going back to the lack of oversight, wanton waste of public money and blatant disregard to our international reputation that brought our country to the brink.

Our plan will ensure a fair sharing out of the benefits of recovery with those already at work. There is welcome evidence that private sector employers are once again agreeing sustainable pay increases with their staff. But it is wrong that the Government still takes more than half of every extra euro now being earned by hundreds of thousands of low and middle income families.

This will end in the next budget, when we will reduce the Universal Social Charge and tax rates further, following the tax cuts introduced earlier this year.

The central goal of our next budget, this October, will be to reinforce a virtuous circle of rising living standards, job creation and improving public finances.

Our plan will make sure that work pays more than welfare, and will reduce numbers of working people and their children experiencing poverty. After the recently established Low Pay Commission makes its first recommendations in July, the Government will respond with a package of measures in the October budget.

If secured and strengthened, the recovery will translate into real improvements in people’s day-to-day lives. But as we have witnessed in other countries, hard-won economic stability can be too easily reversed.

This Government will continue our work to secure the recovery and strengthen its impact on the daily lives of our people. Enda Kenny is Taoiseach and leader of Fine Gael