Symphysiotomy: the whitewash that never was 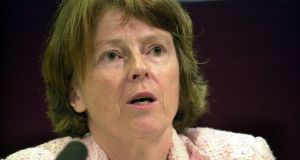 Judge Maureen Harding Clark: after analysis of the evidence, she found no general pattern of injury. Photograph: Brenda Fitzsimons 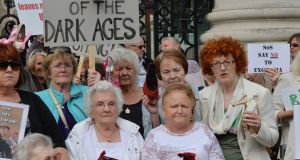 Members and supporters of Survivors of Symphysiotomy (SOS) at Government Buildings in 2014. Photograph: Alan Betson

If you have followed the debate around symphysiotomy in recent years, you will probably understand this to be a David-and-Goliath struggle pitting a small band of elderly women against a monstrous and unfeeling medical and political establishment.

From prevailing media commentary, you will probably believe obstetricians, driven by Catholic belief rather than the interest of mothers, subjected their patients for decades to a “barbaric” operation unheard of and unpractised elsewhere in the world.

Indeed, from the earliest reports, the word “barbaric” was inserted as a statement of fact, rather than an allegation. It would indeed be barbaric if a doctor was to subject a patient to a painful operation with lifelong consequences for no good reason.

The reality is, however, more complicated. Symphysiotomy, the cutting of the cartilage of the pelvic joint to allow more room for delivery when a baby’s head is large relative to the size of the pelvis, was practised in many countries in the past and is still used in poorer parts of the world where alternatives are lacking in emergency situations. (It has even been performed on men, for example, during the Vietnam War.)

It was largely dropped in other Western countries when antibiotics were developed and caesarean sections became safer as a result. But in Ireland, it continued to be used on rare occasions in the 1950s and 1960s and, in the outlier case of Our Lady of Lourdes Hospital in Drogheda, up to the 1980s.

There is good cause for examining why this was so. One theory, supported by comments made by some obstetricians at the time, is that the practice was influenced by Catholic thinking; that widening the birth canal to facilitate future births allowed women to have many babies and made the use of contraception less likely.

However, caesarean sections in the 1950s and 1960s were not the safe bet they are now, and many doctors favoured symphysiotomy because it resulted in fewer deaths of mothers and babies.

The complexities of the arguments for and against the practice have been teased out in numerous reports and court judgments over the past decade, but these have been largely ignored in the hail of criticism directed at successive governments’ attempts to find a resolution to the issue.

Researcher Prof Oonagh Walsh, for example, pointed out in her 2014 report that there is international unanimity of medical opinion as to the value and life-saving potential of symphysiotomy in specific situations.

Judge Yvonne Murphy, in her independent review carried out for the Department of Health in 2014 , agreed: “Some procedures were carried out in circumstances where either the baby or the mother or both could have died if the procedure had not been done. To this extent, the symphysiotomy was a life-saving procedure.”

“This is not a story of heroes and villains. It is a complex interaction of medical, socio-religious and cultural factors,” Prof Walsh wrote. “Medical history includes many instances of interventions that were initially heralded as major advances, and relegated once the consequences were realised.”

Despite the evidence and research presented in these reports they, along with the work of Judge Maureen Harding Clark on the Government’s payment scheme for victims, have been dismissed out of hand by a vociferous lobby group that screamed “whitewash” at every turn. The media, happy not to let the facts get in the way of a good story, obliged.

But consider the authors of these reports. They are all women, pre-eminent in their fields, with a record of independent thinking. They can hardly be accused of being in thrall to Catholic mores or Government ministers: Judge Murphy chaired the groundbreaking inquiry into clerical sex abuse and Judge Harding Clark investigated the hysterectomy scandal at Our Lady of Lourdes Hospital.

Many of the women involved told harrowing stories of their lifelong health conditions, which they blamed on the procedure. It is difficult for any non-expert to gainsay these testimonies but Judge Harding Clark in her report, after a detailed analysis of the evidence, finds no general pattern of injury.

As Ms Justice Mary Irvine wrote earlier this year – in a Court of Appeal judgment rejecting a claim that there was no justification for symphysiotomy – the understanding of doctors at the time was that it was “a relatively benign procedure without significant adverse consequences for the mother”.

Notwithstanding this, there was a consensus within society in recent years that a group of women, now elderly, had suffered an injustice. Compensation was deemed merited.

However, the legal route was fraught with danger, as experts advised from early on. The events occurred decades ago, records are few or non-existent and most of the women went on to have further children, so linking specific health problems to the original symphysiotomy could prove difficult.

The survivors split, and those opposed to the redress scheme took their grievances to the UN, Al Jazeera and anyone else who would listen. The fiction of a monstrous, uncaring system was perpetuated, but with awards of up to €150,000 on offer, most of the women involved signed up to the scheme, as Ms Justice Harding Clark’s report shows.

A small group of women, possibly up to 30, are persisting with the legal option and have forfeited their chance of compensation under the redress scheme. Most observers say they stand little chance of winning their cases.

Arguably, this is the real tragedy today. In historical terms, symphysiotomy was hardly Ireland’s finest hour but our modern-day attempt to set right any wrongs done to a group of women several decades ago is far from the whitewash claimed.