Student loan scheme is the best option for Ireland 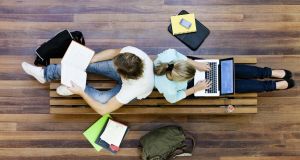 An increase in per-student funding will be costly no matter how it is done. However, with an income-contingent loan the costs to the taxpayer are substantially lower since the burden is shared with graduates

In March of last year, the final report of the expert group on future funding for higher education (the Cassells report) was published. It concluded that a sharp increase in funding is needed because of a combination of demographic growth and the need to reduce student-staff ratios to international norms.

The report’s assessment is that €600 million in additional core funding will be needed annually by 2021, increasing to €1billion annually by 2030. It outlines three options.

One entails eliminating the current student charge of €3,000 (paid by about 50 per cent of students since the others are entitled to grants). This is the return to so-called “free fees”.

A second entails retaining the €3,000 charge for students whose families’ incomes are above the grant threshold, and providing the additional funding needed from exchequer resources.

The third option is the introduction of fees for all students – including those whose student charges are currently covered by grants – with fees of either €4,000 or €5,000 per annum.

At the same time, a system of income-contingent loans (ICLs) would be introduced. ICLs are loans that are repaid at different rates by different individuals according to their earnings. In months when earnings are low or zero, no repayments are made. As earnings rise, repayments rise with them. Repayments are deducted automatically from pay along with taxes.

ICLs are, therefore, completely unlike other forms of debt. Even the concept of “default” is absent – if you fail to repay your debt there is no effect on your credit rating.

As well as having repayments that are affordable – because they are specified as a low percentage of earnings – these loans also ensure that there would be no charges for higher education attendance at the point of entry.

In other countries in which ICLs exist they have had no negative effects on access to higher education for students from lower socio-economic backgrounds.

At a recent conference Charles Larkin presented a paper (jointly authored with Shaen Corbet) that concluded that ICLs could not work in Ireland because the level of “default” (strictly, non-repayment) would be too high. The paper served to focus the debate on the costs to the exchequer of ICLs.

The Cassells report foresees a build-up of debt of over €10 billion in the first 20 years of an ICL scheme. Although this figure may seem high, it would be spread over a long time. And, importantly, an equivalent increase in higher education funding raised through general taxation would be even more costly.

To illustrate this point I analysed the fiscal implications of the various options using a model based on international best practice.

In my analysis, I assumed that policy-makers wish to increase the income of higher education institutes by €2,000 per student. I then simulated the three options proposed in the Cassells report to see their effects on the public finances for the next 40 years. I also modelled two additional ICL options allowing for early repayment of loans and/or a phasing in of the ICL scheme, both designed to reduce initial costs.

I looked separately at the effects on the annual budget deficit – the gap between government revenue and expenditure in a given year – and the on the national debt.

The results show that any ICL has a substantial advantage over the other options in terms of the deficit. The difference amounts to about €600 million per annum compared to the “free fees” option for an equivalent amount of funding.

It is important to emphasise that an increase in per-student funding will be costly no matter how it is done. However, with an ICL the costs to the taxpayer are substantially lower since the burden is shared with graduates.

Moreover, an ICL is more equitable and less regressive since it reduces the subsidisation of higher education by those who have never benefitted from it.

An ICL is entirely feasible in Ireland. It would allow a substantial increase in higher education funding at a lower cost to the exchequer than other alternatives without reducing access.

The resulting savings can then be used to improve funding for earlier education, from pre-school through to secondary school, which is where the main barriers to participation in higher education lie.

Aedín Doris is an economics lecturer at Maynooth University and was researcher for the Cassells report, Investing in National Ambition: a Strategy for Funding Higher Education

1 Ireland among countries urged to consider reinstating Covid-19 restrictions
2 Maura Higgins: ‘I really hated it. Apart from that massage, the rest of it can kiss my ass’
3 ‘I’ve been sleeping with my girlfriend’s sister. I need help. What do I do?’
4 Sinn Féin apologises as member resigns over social media abuse
5 Fintan O’Toole: Turning a blind eye to meat plants a very old habit
Real news has value SUBSCRIBE