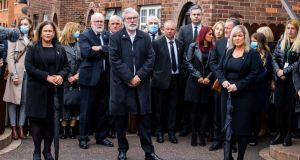 The controversy over the Provisional movement’s participation in the Bobby Storey funeral is entirely predictable. But it raises far more fundamental issues than adherence to social distancing, mask-wearing, and compliance with guidelines on funeral gatherings.

Sinn Féin, the political arm of the Provisional movement, revealed itself (or unmasked itself) as the subordinate element of an entity in which a small group of self-appointed Provos actually plan and dictate the strategy of the entire movement.

Who were the men dressed in a uniform of black slacks, white shirts and black ties? Style-conscious funeral stewards? Retired members of the Riverdance cast? What happened to the black berets? Last season’s fashion? Where were the black sunglasses? Only worn in winter, perhaps?

For all the jokes about absent face coverings, the issues raised by the public funerary demonstration are no joke. They point to fundamental problems with the nature of Sinn Féin.

This newspaper performed a valuable service to its readers in publishing recent articles by Gerry Moriarty and Stephen Collins concerning Storey and his funeral. Alas, it took the visual impact of these events to bring about the publication of those insights and commentaries. So much is left unsaid about the current state of the Provisional movement.

The Stormont cash-for-ash scandal inquiry by Sir Patrick Coghlin demonstrated that senior Sinn Féin ministers in the northern Executive regularly took instruction, via their advisers, from unelected figures in the Provisional movement on matters of great public importance. The real power is not exercised by ministers; it lies with an unaccountable politburo centred in west Belfast. That politburo regards itself as holding a mandate from history to exercise the powers of the Irish Republic proclaimed in 1916.

It was they who authorised Storey in the years following the Belfast Agreement to carry out a constant campaign of criminal “fundraising” robberies across the island only some of which was catalogued in Gerry Moriarty’s recent article.

It was they who sent senior Provos with explosives experience to sell their know-how to the communist Farc guerrillas in Colombia for $25,000,000, money raised from narcotics exports to the US.

It was they who authorised Storey to carry out the Northern Bank robbery and it was they who lied about it as they sought to launder the proceeds in Ireland and in Europe. They even planted some of the proceeds in a toilet in a policemen’s sports club to create a phony alibi for the Provos.

Why would a small funeral of the type ordained by the Sinn Féin members of the North’s Executive for ordinary grieving relatives of people dying there during the Covid lockdown not suffice for Storey’s obsequies?

The answer is simple: Provo exceptionalism. This was their equivalent of a state funeral for Gerry Adams’s loyal right-hand man – a state funeral organised by a state within a state. The same exceptionalism allowed them to rob banks and seek Farc money to finance the movement after the Belfast Agreement. Why? Because, as the scorpion famously explained to the dying frog who had ferried it across the stream: “Because I could.”

Arlene Foster may cite breach of Covid guidelines on an analogy with Dominic Cummings.

But the real issue is the impression made on the minds of almost a million unionists by the funeral spectacle. They see the commemoration and glorification of killing and criminality.

Where we need cross-community reconciliation and respect to heal the North’s sectarian wounds, the Provos couldn’t give Storey the same quiet kind of funeral that everyone else is obliged by their laws to have these days.

Reading the articles by Gerry Moriarty and Stephen Collins, I was reminded forcibly of the part played by Storey in directing the Provos’ criminal and sometimes murderous activities throughout the years between signing the Belfast Agreement and implementing it by the St Andrews Agreement, a nine-year period in which I held the offices of attorney general, minister for justice and tánaiste.

During those years, I knew what was happening. The government knew what was happening. We faced down Adams and McGuinness on the killings, the maimings, the crimes and the fundraising that the Provisionals were carrying on. We resisted their efforts to compromise the rule of law and to create a state within a state. They wanted nationalist areas to be policed by “restorative justice committees” some of which featured IRA figures. They equivocated on our demand that the legitimacy of the Police Service of Northern Ireland, the courts and the criminal law must be accepted by all elected politicians.

When I laid out for the Irish people just some of the things that Storey and the Provo politburo were up to, I was accused of attempting to derail the peace process. One former columnist in this paper in 2005 famously penned a piece on the topic under the headline “Getting Michael McDowell to shut up”. I am glad I didn’t.

Perhaps the incoming coalition will find time to impose a level playing field on all political parties in relation to party financing and funds.