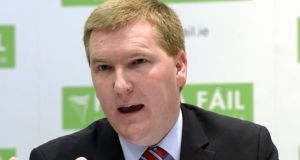 Fianna Fáil TD Michael McGrath: has done the party a service by raising the issue at this time as it requires considered internal debate in advance of the election. Photograph: Brenda Fitzsimons

The outbreak of debate within Fianna Fáil about whether or not the party should participate in a coalition after the next election is more than an August silly season story.

Michael McGrath has done the party a service by raising the issue at this time as it requires considered internal debate in advance of the election. Voters should not be left under any misapprehension about how Fianna Fáil will respond to the election outcome.

The bottom line is that the numbers in the next Dáil will dictate who can form a government and the electorate deserves to know in advance what the most likely combinations are going to be.

Unless there is a significant movement in public opinion between now and election day the result is going to force responsible politicians of all parties to think the unthinkable.

The Irish Times poll in May gave Fine Gael 28 per cent of the vote, Labour 7 per cent, Fianna Fáil 20 per cent, Sinn Féin 21 per cent and Independents/Others 24 per cent. Extrapolating those vote share figures directly into a share of the 158 seats in the Dáil would leave Fine Gael with 44, Labour 11, Fianna Fáil 32, Sinn Féin 33 and Independents/Others 38.

While the Irish voting system does not translate into exact proportionality in terms of seats, it still provides a rough guide to the outcome. So unless there is a significant shift in opinion over the coming months the formation of the next government is going to be one of the most difficult challenges ever faced by an incoming Dáil.

In that situation the prospect of political chaos, followed by economic chaos, will become a probability and not just a possibility unless the political class shows itself capable of rising to the occasion. The official Fianna Fáil position is that it will not go into coalition with either Sinn Féin or Fine Gael as a junior partner. So what are the options? On current polls a Fianna Fáil/Sinn Féin coalition would not have the numbers, and in any case it would be anathema to most of the current Fianna Fáil TDs.

Still, in theory if Fianna Fáil gets more seats than Sinn Féin the remote possibility of such a coalition, backed by left wing Independents, could be enough to scare potential middle class supporters into the arms of Fine Gael. The main Coalition party is already playing this card for all it is worth. While Fianna Fáil may win more seats than Sinn Féin it is highly unlikely to get more than Fine Gael. That is why McGrath’s challenge to Fianna Fáil to consider going into coalition with Fine Gael, even if it is not the bigger party in the arrangement, is something that deserves serious consideration from his colleagues.

“As well as being punished for our mistakes at the last election we suffered because voters knew that we were not going to be in government. If the view that we are not going to be relevant to the formation of government next time around gains credence we will lose support in the campaign,” said one respected party figure.

There is an understandable and widely held view in Fianna Fáil that the most desirable outcome would be a significant increase in seats in the forthcoming election followed by another period in opposition to build its strength for a tilt at becoming the major government party at the subsequent election.

For that to happen, though, Fine Gael and Labour would need to get back into office for a second term, probably with the support of Independents or smaller parties. If the opinion polls of the past three years are any guide, that outcome is unlikely as the Coalition parties are likely to fall very far short of the 79 seat mark required for a majority.

Some members of the Fianna Fáil front bench argue that if there is total stalemate the party’s best option would be to stand aside and allow the current Coalition to continue in office as a minority government for a period.

The example of the Tallaght strategy, pursued by Alan Dukes and Fine Gael between 1987 and 1989, which allowed Charles Haughey to govern as long as he followed a set budgetary strategy, is cited as an example of how that might work.

The problem is that such a strategy leaves an Opposition party sharing responsibility for government decisions without the power to really shape them. Its rivals on the Opposition benches would exploit that situation unmercifully and leave Fianna Fáil with the worst of both worlds.

One of the arguments against coalition is the experience of smaller parties in Irish politics over the years. The Greens were exterminated for their role in the last government and Labour looks certain to be punished severely for its role in this one. However, two parties of roughly equal size have never gone into coalition before and that might offer a different prospect, particularly if the current surge in economic growth continues.

One thing Fianna Fáil needs to be very careful about is not making promises it cannot keep. What will really hurt the party is ruling out a coalition in advance of the election and then agreeing to it when the results leave the party with no alternative.

The next Dáil will not be able to wash its hands of responsibility for the formation of a government on the basis voters have given the wrong result. That is something all of the parties need to bear in mind.