Stephen Collins: State commemoration of 1916 has been a success

‘Things might have been far worse if the dreamers, poets and radical revolutionaries had emerged victorious from the Rising to impose their vision on an unprepared nation’ 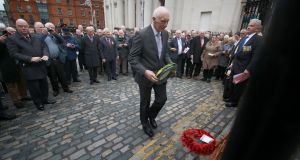 At the wreath-placing ceremony to mark the shooting dead of Constable James O’Brien, the first casualty of Rising, was his great, great grandson, Michael O’Sullivan from Listowel, Co Kerry. Photograph: Nick Bradshaw

The State-organised 1916 commemorations have been widely seen as a success, encouraging pride in national independence and an open discussion about the Rising.

Fears expressed by some, including this column, that the inevitable glorification of violence 100 years ago could have damaging implications for today’s politics do not appear to have been justified, although it is probably too early to come to a definitive conclusion on that.

One of the positive aspects of the series of events since the start of the decade of commemoration in 2012 has been the willingness of people to look at the events of a century ago with an open mind.

Maurice Manning, the chairman of the expert group that advised Minister for Arts and Heritage Heather Humphreys on the commemoration, told the Parnell Summer School in Avondale during the week that one of the striking features of the meetings he had attended around the country was that people no longer contested the rights of others to have a different view of the past.

An example of that manifested itself at a ceremony to commemorate the first casualty of the Rising, Constable James O’Brien of the Dublin Metropolitan Police. The unarmed policeman was shot dead at the gates of Dublin Castle on Easter Monday 1916 by Seán Connolly of the Irish Citizen Army who was himself killed a short time later to become the first rebel casualty of the Rising.

The ceremony to commemorate O’Brien was not part of any official programme but was organised by a number of retired gardaí who formed the Harp Society to remember the police casualties of the 1916-1922 period.

She was 10-year-old Freya Connolly, great-granddaughter of Seán Connolly, who had fired the fatal shot. That simple unprompted act of reconciliation by the Connolly family symbolises all that is best about the commemorations.

Of course, most Irish people in 1916 belonged to none of these categories but were simply trying to live normal lives and survive as best they could. Discovering that may be a disappointment for the family historian, but it probably gives a better insight into the reality of the past.

One of the paradoxes about the commemoration of the Rising is that alongside the obvious national pride it generated there comes a refrain from a range of commentators, politicians and activists of various kinds asserting that the ideals of the 1916 leaders were betrayed by those who came after them.

This jaundiced view of the leaders of independent Ireland chimes with the current denigration of politicians and political parties which pervades so much of the commentary on public affairs.

One of the highlights of the Parnell Summer School was a paper by Trinity College Dublin historian Anne Dolan who suggested that in tandem with the way “we have danced, sung and seminared” every twist and turn of the Rising, there had been “a rather eager trumpeting of all that we have failed to do, of just how much we have disgraced, reneged on, degraded and betrayed the ideals of the men of 1916”.

President Michael D Higgins is just the most prominent of those who have found the leaders of independent Ireland wanting on so many levels, but like other critics he has not given any credit to the politicians who came before him for the very real achievement of building an independent, democratic Irish State.

It needs to be said again and again that we are one of the longest surviving continuous democracies in the world. That is no mean achievement considering what happened across Europe in the 1920s and 1930s when one country after another slid into dictatorship.

The relentlessness of the negative commentary about the first few decades of Irish independence has left many younger people with a distorted view of their own past; its faults judged in terms of today’s standards and its virtues ignored.

Of course, the politicians of independent Ireland have had their faults, but there is no guarantee that if the 1916 leaders had survived things would have been any better. In fact, going by events in other European countries at the time, there are grounds for believing that things might have been far worse if the dreamers, poets and radical revolutionaries had emerged victorious from the Rising to impose their vision on an unprepared nation.