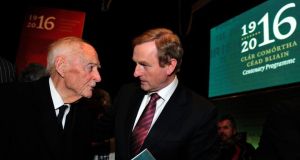 The emphasis on inclusiveness and reconciliation in the Government’s commemorative programme of events for the centenary of the 1916 Rising hasn’t pleased everybody, but that itself testifies to its worth.

The choice in commemorating a key historical event like the Rising is whether to look back through a narrow prism that reaffirms a traditional narrative or to take a broad view that looks unblinkingly at the complexity of the past.

It is almost a decade since former president Mary McAleese delivered a powerful and thoughtful lecture about Irish history which has been widely quoted by historians around the English-speaking world.

“Where previously our history has been characterised by a plundering of the past to separate and differentiate us, our future now holds the optimistic possibility that Ireland will become a better place where we will not only develop new relationships but will more comfortably revisit the past and find there elements of kinship long neglected, of connections deliberately overlooked,” she said in November 2007.

The programme of commemoration for 2016 looks like a worthy effort to come up with the kind of broad-minded response to the past that McAleese had in mind.

The importance of the Rising on the road to independence is not being diminished and will be marked by a range of events including a military parade on Easter Sunday and concrete actions to preserve some of the buildings that will leave a permanent legacy of the event.

Unlike the 50th anniversary commemorations in 1966, however, the emphasis will not solely be on the violent events of one week in April. Due regard is being paid to the wider context in which the Rising took place.

The introduction to the commemorative programme makes the point that there was hardly a family in Ireland that was not touched by the first World War. The involvement of Irish people in that appalling conflict was commemorated by President Higgins at a ceremony in Mons last August, and will be again at the anniversary of Gallipoli this year and the Somme in 2016.

The commemorative programme for 2016 also recognises the scale of civilian casualties in Easter 1916, and does not shirk from acknowledging that the British army and police casualties are also worthy of remembrance.

In a major piece of research, the Glasnevin Trust has come up with a list of the 485 men, women and children killed in Easter Week 1916, and intends to erect a wall at the cemetery on which the names of all will be inscribed.

Critics of the 2016 commemorative programme claim the past is being sacrificed to suit the political agenda of the present day but the opposite is the case. The current warm and healthy relationship between Ireland and the UK is enabling us to look at the relationship between the two in a healthier way than the old nationalist and unionist narratives permitted.

The eminent historian David Cannadine, in his most recent book, The Undivided Past, wrote: “The deeds and attitudes that constitute and exemplify our common humanity tend to be to historians what good news is to journalists: the default mode of human activity, a quotidian reality that rarely merits headlines being somehow either unworthy or uninteresting.”

Thankfully we have got to a stage in Ireland where we can acknowledge the common humanity of all who suffered and died during the 1912 to 1922 period without feeling that it undermines our national identity.

Did the ordinary Dubliners who were killed in 1916 die for Ireland? And what about the policemen who saw their duty as keeping the peace?

Some years ago an individual who was then a senior civil servant told me how his grandmother was killed in 1916. She was having a bath in her home in James’s Street when she was hit by a bullet fired by a rebel in the nearby South Dublin Union, now St James’s Hospital, in an exchange of fire with the British army.

Luckily he managed to avoid having his children taken into care but in later years he found it galling to see former rebels, some of them in well-paid public service jobs, getting IRA pensions while he got no help to look after his family.

This is just one human story from that troubled period in Irish history and there are probably thousands more that have not been passed on.

Luckily the IRA pension applications archive which was opened last year contains a treasure trove of human stories that is already providing fresh insights into the period. While the stories in the archive naturally focus on rebel actions, new light is also shed on a wide range of events from the 1912 to 1923 period. It is a mine of information not only for professional historians but for anybody interested in the past.