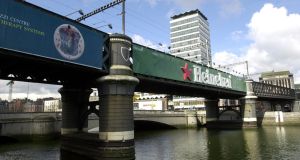 It is somewhat unfortunate that the first bridge to greet sea-borne visitors to Dublin should also be the city’s ugliest. A grim monument to the grim year it opened, 1984, the East-Link remains universally unloved, and unlovable, except by motorists who can remember the shortcut it created.

If New York is so good they named it twice, the East-Link’s appeal is summed up by its single, entirely functional, moniker. To the best of my knowledge, nobody has ever campaigned for it to be renamed after a famous patriot or writer. The honour would be dubious.

It is also unfortunate, by the same measure, that what may be Dublin’s most ornate bridge is hidden away from seafarers at the opposite end of the Quays. That one has been renamed as the Sean Heuston. But its modern, rebel moniker hides royalist origins. Even today, there may be a few Dubliners who still call it “Kingsbridge”, old shorthand for its official original title “the bridge of George the Fourth”, as which it was inaugurated by a brother of the Duke of Wellington in 1827.

In any case, both bridges serve their primary purpose – to cross the river Liffey. And both feature in a very handsome recent book on the subject, Bridges of Dublin, by Annette Black and Michael B Barry. Replete with photographs of the 24 modern crossings, and some of their predecessors, the publication is subtitled “the remarkable story of Dublin’s Liffey Bridges”.

Which is doubly apt, because from these structures alone, you can learn much of the history of Dublin, and of Ireland in general.

The contrast between regal Kingsbridge, designed with a confident flourish in what was then the second city of empire, and the republican East-Link, built in hard times, with a purely workaday ethic, might once have suggested a harsh ending to the tale.

Happily, Dublin’s story has since been redeemed by such additional chapters as the second bridge to greet visitors – Santiago Calatrava’s gorgeous harp, which wins the honour of featuring on the book’s cover.

But getting back to the question of the ugliest bridge, the East-Link is not entirely without rivals. Among them may be its chronological neighbour, the Frank Sherwin (the one next to the Sean Heuston, opened in 1982).  Although that does have the virtue of at least a suggestion of curves, only an engineer’s mother could love it.

Then there is the Loop Line rail bridge, which may or may not be hideous in itself, but committed the unpardonable sin of eclipsing the Custom House from upriver.

It was fiercely controversial at the planning stage (the late 1880s) and was declared an “act of vandalism” by critics. But the then almighty railways prevailed, driving the proverbial coach and four between the city and an unobstructed view of its favourite building.

When the gunboat Helga berthed nearby and shelled Liberty Hall in 1916, its first shot hit the bridge. That it didn’t do more damage might be considered a missed opportunity. Talk of getting rid of the structure, one way or another, has continued ever since.

Ideas about beauty can change over time, of course.  Consider the Ha’penny Bridge, which this year has reached the grand old age of 200. It’s now one of the main postcard images of Dublin, but when it opened in 1816, it had to undergo a probationary period. The man behind it, city alderman William Walsh, was told that if the bridge were to be “found objectionable”, he would have to take it down again. So, cannily, he allowed customers to use it toll-free for the first 10 days, which may have helped establish it in the public affection.

Even so, almost a century later, at least one Dubliner – the certified aesthete Hugh Lane – damned it as an “ugly metal footbridge”.

And by way of housing his art collection, he offered “a most beautiful and remarkable” replacement – a stone bridge, designed by Edwin Lutyens, that would double as a gallery. His friend WB Yeats endorsed the plan as a Ponte Vecchio on the Liffey. Dublin Corporation liked it too. But complications ensued. Even before Lane’s death on the Lusitania, prospects for the bridge-gallery had changed, utterly. This particular beauty, terrible or otherwise, remains unborn.