South must confront its ambiguity about the North

Psychological divide remains between people in the Republic and Northern Ireland 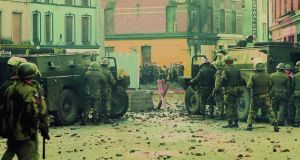 British paratroopers in Derry on Bloody Sunday. The conflict continued to divide trade unions, county councils and sporting organisations among others: in that sense the Troubles was, in historian Brian Hanley’s words, “a constant backdrop” to life in the Republic. Photograph: William L. Rukeyser/Getty Images

Blood stained the ground around Merrion Square and Holles Street 50 years ago this weekend following protests against the carnage in Northern Ireland. A fervid and emotional atmosphere in Dublin culminated in baton charges by gardaí with at least 50 people taken away in ambulances and 16 gardaí injured. A member of the Garda Special Branch told a journalist “the only way to keep these bastards down is to baton them until they don’t come back again”.

Those “bastards” frightened some and exhilarated others; veteran republican Máire Comerford, a stalwart member of Cumann na mBan during the War of Independence and Civil War, was quoted in this newspaper: “It is an enormous thrill to me to see people on the streets of Dublin once more.”

Before the violence erupted, speeches outside the GPO, organised by the new National Solidarity Committee, had been impassioned as visitors from the North sought more than cross-Border empathy and demanded arms to defend their communities.

Northern MP Paddy O’Hanlon insisted that, “This damned State do something” while fellow MP Paddy Kennedy asserted “we have no one else to appeal to but our fellow Irish citizens”. Offers to house refugees from the North in the Republic multiplied and many who considered themselves politically moderate found themselves radicalised.

'There is little appreciation in Dublin and the South of the state of mind, habit of thinking and point of view of the people in the North'

The extent to which the southern affinity endured is just one of the many questions arising out of the legacy of Ireland’s dark summer of ’69. It was common as early as the mid-1970s for historians and commentators to insist, like John A Murphy did in 1975, that despite the strong reaction in the Republic to Bloody Sunday in 1972, “the Northern Troubles had amazingly little impact on the South”.

There is a danger, however, of making sweeping generalisations about reason replacing emotion and a partitionist mindset taking hold again quickly in the Republic as the Troubles deepened.

The historian Brian Hanley, in his engaging book published last year (The Impact of the Troubles on the Republic 1968-79: Boiling Volcano?), has argued for a more nuanced assessment. There was considerable diversity on the question of the North in the mainstream media in the Republic, as well as an ongoing, strong identification with the idea of a united Ireland even after years of sustained violence.

The conflict continued to divide trade unions, county councils and sporting organisations among others: in that sense the Troubles was, in Hanley’s words, “a constant backdrop” to life in the Republic.

But there is little doubt many disengaged and there was a continuity in the psychological divide between northern and southern nationalists. Hanley quotes Sinn Féin TD in 1922, Seán Milroy, as saying “there is little appreciation in Dublin and the South of the state of mind, habit of thinking and point of view of the people in the North”.

Various versions of that assessment continued down through the decades and in his recent memoir, Seamus Mallon referred cuttingly to the “Berlin wall of indifference between North and South” he experienced during his political career. But there was also the judgment of Michael Farrell, a veteran of the Northern Ireland Civil Rights campaign who in the mid-1990s argued, “Northern nationalists tend not to understand the South”.

The Brexit conundrum has brought some of these tensions and resentments back into focus. While the Taoiseach asserted at the end of 2017 that northern nationalists would never again be “abandoned” by a Dublin government, I have heard northern nationalists dismiss this as hot air: has any serious thought been given to what that might mean in practice?

We have rightly had much focus on British Tories who have little genuine interest in or understanding of Northern Ireland and its complexities; those who would blithely abandon Ulster unionists if and when it suited them. A recent survey of British Tories suggested 59 per cent of them would rather see Northern Ireland leave the UK than abandon Brexit.

But what of southern attitudes to Northern Ireland on the back of Brexit? There were frequent references in the Republic in 1969 to “our people” in the North, meaning, of course, nationalists; 50 years later, whose people are they and why the reluctance to confront that and related questions of British and Irish citizenship that, arising out of the peace process, were supposed to transcend the Border? The Irish government has continually referred to the “solidarity” of the EU with Ireland on the question of the Border in Ireland, but is solidarity closer to home really considered at all?

The slogans of 50 years ago do not fit the current circumstances, especially given the substantial growth of the numbers in the North who do not identify as either unionists or nationalists.

What does exist now, unfortunately, is a new version of Northern Ireland in limbo and a fundamental denial to its people of self-determination. It is a subject that requires a lot more honest and frank discourse and not just in London.

1 Gardaí suspect botched murder attempt was bid to avenge Mulready-Woods death
2 Who are Ireland’s 17 billionaires?
3 Election 2020: FF edges ahead of FG as SF surges in new Ipsos MRBI poll
4 Rob Delaney: ‘As my career took off, my son got sick ... And then he died’
5 Dublin City Council throws out Iveagh Markets application
Real news has value SUBSCRIBE