Scotland turned its face in one political direction, while the rest of UK turned firmly in another 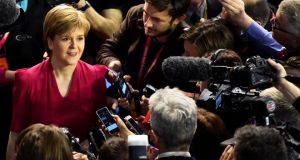 ‘The Scottish election is a huge vindication of Nicola Sturgeon’s leadership, but at the height of SNP success, serious challenges will emerge. How can the SNP 56 MPs assert influence at Westminster? How does the SNP oppose austerity when a majority Tory government has been returned?’ Above, Sturgeon arrives for the Glasgow declarations on Friday. Photograph: Jeff J Mitchell/Getty Images

Scotland has had landmark Westminster elections before.

There was 1997 when Scotland voted out every Tory MP. Then in October 1974 there was the first ever Scottish-wide Nationalist surge; in 1955 there was the high tide of Tory Unionism when they won over half the votes and seats; and in 1922 Labour broke through for the first time and “Red Clydeside” went to Westminster.

This is one of those moments – and more. History has been made by the collective expression of the Scottish people. Records have been broken north and south of the border. Scotland has turned its face in one political direction. And England and the rest of the UK firmly in another.

The SNP surge has carried nearly all before it. Labour bastion after bastion has fallen. All of Glasgow has gone from red to yellow. The Liberal Democrats have been wiped off the mainland and left with the solitary outpost of Orkney and Shetland.

The final picture saw the SNP win 50.0 per cent of the vote: the only party to do so apart from the Conservative and Unionist Party in 1955. Labour’s vote share of 24.3 per cent was its lowest since 1918, which was the first time it stood as a national party.

The whole campaign felt completely different from any other in living memory. Nothing Labour threw at the Nationalists worked. Jim Murphy went around desperately saying “I am not a Westminster politician”, but instead “a Scottish politician who goes to Westminster”. Scotland’s First Minister and SNP leader Nicola Sturgeon was buoyed by a new wave of popularity and adulation which even took the SNP by surprise.

There are short-term factors – the independence referendum and Labour’s alliance in it with the Tories – which have contributed to this. But more important are deeper, longer-term trends. A Scotland which feels itself less British and in which the old pillars of the liberal unionist establishment: Church, law, education, have long ceased to have the power and status they once had.

Way beyond the appeal of the SNP, Scotland has grown increasingly impatient at the foibles of Westminster, more confident as a nation and society, and more assertive and calm in wanting more self-government.

The SNP wave carries with it the weight of high expectations. A powerful nationwide alliance of west and east coast, Highland and Lowland, town, city and rural areas has emerged and swung behind the SNP. This cannot be characterised as entirely centre-left or social democratic, but as a cross-class national alliance.

Irrespective of how Scotland voted, the UK was always going to get a Tory or Labour government. No-one imagined a majority Conservative government under David Cameron. This is now the reality that Scotland and the rest of the UK face – one that will face questions about its legitimacy and whether it does or doesn’t have a mandate north of the border.

This points to a vastly accelerated speed of political change. This election was not about Scottish independence. Everyone in Scotland across the political spectrum agreed on that. But David Cameron and the Westminster Tories raised the spectre of “separatism” to undermine Labour in Scotland and win back soft Tories in England who were toying with voting for UKIP.

What kind of future for the Scottish Labour Party, Scottish Tories and Liberal Democrats? The grimmest prospects face Scottish Labour, which has fallen off a cliff in the last few years. It was in power in the Scottish Parliament as recently as 2007. At Westminster in 2010 it won 42.0 per cent of the vote and 41 seats; its decline has been as steep as it has been speedy and spectacular.

The Scottish election is a huge vindication of Nicola Sturgeon’s leadership, but at the height of SNP success, serious challenges will emerge. How can the SNP 56 MPs assert influence at Westminster? How does the SNP oppose austerity when a majority Tory government has been returned? What happens if the Tories offer the SNP what they supposedly want, namely, full fiscal autonomy, with the financial constraints it involves? And under what conditions could a second independence referendum be brought forward and won?

Similarly, a re-elected David Cameron may look emboldened, but he was comfortable in coalition with the Lib Dems. It meant he was freed from the control of his most siren right-wing voices. Now with a minuscule majority, he has no choice but to listen to them, and carve out a path towards renegotiating the terms of Britain’s membership of the EU and referendum in 2017.

Where Scotland now finds itself has some echoes of Ireland pre-independence (as well as many obvious differences). It is slowly decoupling and detaching itself from British politics whose elites have played a masterclass in misreading the situation. For the SNP to take maximum advantage it has to play a canny, cautious game, and at same time negotiate the difficult seas, traditions and processes of Westminster. All of which might sound familiar to Irish readers.

Dr Gerry Hassan is author of Caledonian Dreaming: The Quest for a Different Scotland and the recently published Independence of the Scottish Mind