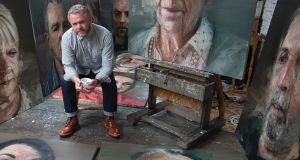 All 18 men and women painted by Colin Davidson for his “Silent Testimony” exhibition suffered loss in the Troubles.

Johnnie Proctor’s father John was shot dead in the hospital car park in Magherafelt when he went to visit Johnnie, his new born son.

Virtue Dixon’s daughter Ruth died when the roof of the pub where she was celebrating her birthday collapsed in an explosion, at the moment when the DJ played Happy Birthday.

Margaret Yeaman was blinded by a car bomb.

Jeff Smith was paralysed by a landmine explosion.

These losses occurred between 1969 and 1994, but Davidson insists the exhibition, which recently left the Ulster Museum in Belfast for the Irish College in Paris, “is about right now. It’s not about history. It’s not about me dragging us back into the dark times.”

Davidson traces “the seed of the idea” for the exhibition to the 1998 Belfast Agreement. “It was good news for most of us, for the people who were sick and tired of what was going on,” he says.

“But there was utterly nothing in it for people who’d suffered loss . . . Tens of thousands of people who are dealing with loss through the Troubles are in a sense paying for everybody else’s peace.”

Some 70,000 people visited the exhibition in Belfast between June 2015 and January 2016. In written reactions, many said it had moved them to tears. “The eyes of each painting will stay with me for years to come,” one wrote.

There is something particularly extraordinary about the eyes. Davidson painted city centre windows for a long time, he explains, “sheets of glass and the light that refracts and reflects and the interaction. I instinctively brought what I learned from painting windows to the eyes.”

The short texts that accompany each portrait do not mention the sitter’s religion or politics. Davidson has remained painstakingly impartial. He is not prescriptive. Viewers may perceive anger, bitterness, resignation, grief or forgiveness in the Belfast portraits. He ventures no opinion.

“I stop short of spelling it all out,” Davidson explains. “I need the viewer to feel there is a gap in the work that they can fill.”

Personally, Davidson sees no connection between his paintings and the Charlie Hebdo and November 13th atrocities in France last year. But it is a measure of the universality of his work that French commentators saw parallels between loss in Belfast and France’s bereavement.

At a time of divided loyalties and identity, some sensed in the North’s experience an intimation of the danger stalking France.

Before “Silent Testimony”, Davidson was mainly known for painting what he calls “the great and the good”, including most of Ireland’s best-known cultural figures, including Seamus Heaney and Brian Friel.

Is there something incongruous about painting movie stars and victims of the Troubles? “Not remotely,” Davidson replies. Every sitter is “an equal human being”.

He approaches every portrait in the same way, determined to “strip away the facade society has put up.”

Four years ago, Pitt’s lawyer asked Davidson to give the actor painting lessons while his wife, Angelina Jolie, was working in London. Davidson flew over for several days each week. “We spent a lot of time together, painting, talking, listening to music...”

Pitt has “phenomenal potential,” Davidson says. “He’s a creative at heart. He is somebody who seeks to express himself in his craft, whether that be acting or producing... I would love to see an exhibition of his work.”

After seeing Davidson’s portrait of Pitt in the Smithsonian, the editors of Time magazine asked him to produce a portrait of German chancellor Angela Merkel. He was reluctant to paint her without a sitting.

“But you just don’t turn Time down when they come knocking at your door.”

Davidson was unaware that his portrait would be the cover of the 2015 “Person of the Year” issue. He hopes that “a sense of the chancellor’s dignity, compassion and humanity is woven into the paint”.

Davidson’s paintings hang in the most prestigious collections of the Republic and Northern Ireland.

“Silent Testimony” is likely to travel from Paris to North America. Davidson considers it his “most important body of work” and will not allow the 18 portraits to be separated.