Shift to WhatsApp has implications beyond private messaging 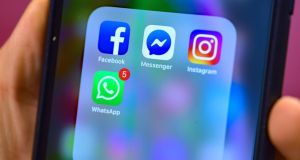 “The growth of WhatsApp and the move away from the Facebook platform is likely due to a deliberate strategy on the part of Facebook.” Photograph: Nick Ansell/PA Wire

A global move to closed messaging such as WhatsApp is concerning not only for publishers but also for society and democracy. Internationally – and in Ireland – many people are spending less time with Facebook and more time with the company’s other platforms,WhatsApp and Instagram.

The growth of WhatsApp and the move away from the Facebook platform is likely due to a deliberate strategy on the part of Facebook. The tech giant has plans to make money out of private messaging and as it is now among the fastest-growing areas of online communication, the company is shifting towards a privacy strategy across its platforms.

The move from relatively open networks such as Facebook to closed applications such as WhatsApp and Facebook Messenger is not just a trend of general interaction; they are also being used more heavily to access news. This shift has potentially enormous implications.

Algorithmic and policy decisions by Facebook indicate that social networking as we know it is likely to change. Facebook chief executive Mark Zuckerberg insists that many people do not want to converse in the “digital equivalent of the town square” but rather in private groups. Across Facebook, Instagram and WhatsApp the priority is now for discussion on smaller, often closed groups.

Those who use WhatsApp and Facebook groups have lower trust in the mainstream news, are more likely to use partisan news sites and to trust the news from social media

According to Zuckerberg, WhatsApp and Facebook Messenger are now likely to be the main way users interact across the Facebook network and, in a concerning development, he is amalgamating their backends. Given the end-to-end encryption on WhatsApp, which even the tech giant itself says it cannot see behind, this means that the sharing of much news and comment in the future will be essentially closed and opaque. The detail will be invisible to both regulators and researchers.

This year’s global Digital News Report from Reuters, published today, looked at nine countries with different levels of social media activity – the United States, the United Kingdom, Spain, Ireland, Turkey, Malaysia, Australia, Canada and Brazil – and found that the majority of Facebook and WhatsApp users were members of one or more active groups. Interestingly, about half of Facebook and WhatsApp users (51 per cent and 46 per cent respectively) are active members of groups that mostly include people they do not know.

But there are huge differences between countries. Relatively poor broadband in the much of Africa, Latin America and Asia and in developing countries generally encourages users on to these services. In Spain, Malaysia and Brazil about 60 per cent of those surveyed used groups to interact with people they did not know. In contrast, only a minority of users in Ireland (30 per cent) Australia (27 per cent) and the UK (12 per cent) currently use WhatsApp in this way.

Countries with the bigger, more open groups which can share at scale may be more prone to disinformation. The broad characteristics of those who use WhatsApp and Facebook groups are concerning in this context. They have lower trust in the mainstream news, are more likely to use partisan news sites and are more likely to trust the news they get from social media.

In the UK, about half of those who use closed news groups trust news from social media, compared with just 10 per cent of the whole sample. In Ireland, the comparable figures are 34 per cent of group members, compared with 17 per cent of the sample as a whole. This suggests that, for the minority that use them, the news that these groups serve up is an important part of their overall news diet – and is one which will be hard to shift.

In developing countries, the consequences have already been dire. In India, these groups have been linked to a spate of killings,while in Brazil and South Africa negative campaigning and false information has been disseminated in a way that would be far harder in an even relatively open network such as Facebook, which can be open to some scrutiny.

More than a million WhatsApp groups were set up in Brazil to promote candidates in the recent election, including far-right former army captain Jair Bolsonaro, who used this to compensate for the relative absence of mainstream television coverage. Facebook has even admitted that its platform was used to incite violence leading to what the United Nations has termed "ethnic cleansing" in Myanmar.

Disinformation is, of course, most prevalent in groups that discuss politics. The overall research found in general that those who join Facebook or WhatsApp groups tend to be better educated and more politically committed, coming from the far right or the far left rather than from the political centre. Men are slightly more likely to join a news group, with 16 per cent being of news or political groups, compared with 12 per cent of female users; the same is broadly true of WhatsApp.

Facebook itself has belatedly invested in collaborations with fact checkers and digital literacy campaigns, and has made it harder to share messages within WhatsApp. However, by its nature, a closed group cannot be subject to the same scrutiny as one which regulators, journalists, researchers and others can view. It seems clear that not only will publishers have to get to grips with their news being shared in opaque, closed platforms but so too will regulators and human rights organisations.