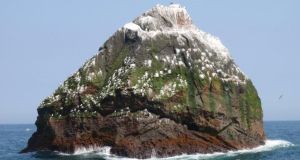 Rockall Island: “This lump of stone has becomes an improbable rock of contention.”

In the opinion of Jose Luis Borges, the great Argentinian writer, the Falklands War between his native country and the United Kingdom amounted to little more than “two bald men fighting over a comb”. Heaven knows what metaphor would be suitable for the bizarre, yet escalating, dispute between Scotland and the Republic over the status and future of Rockall.

This lump of stone, hundreds of miles from Ireland and the UK – though, it must be said, rather closer to the latter than the former – has becomes an improbable rock of contention. There is, it must be said, a Ruritania-in-the-Atlantic element to this dispute.

Arguments over fishing rights are hardly unprecedented. This tempest revives memories of the so-called Cod wars with Iceland in the 1970s and is a fresh reminder that the waters of the north Atlantic have often been contested territory. Even so, viewed from Scotland, it is striking that this is a dust-up making greater waves in Ireland than in any part of the UK.

That doubtless reflects a certain complacency in the UK. Rockall was claimed by the UK in 1955 and that, as far as government ministers in London and Edinburgh alike are concerned, was that. Argument over; case closed. If the Irish decline to recognise the UK’s sovereignty on and around Rockall that is their problem, not ours.

In that sense the decision to send a fisheries-protection vessel, the Hirta, to Rockall, the better to warn off Irish trawlers that have been fishing inside the 12-mile exclusion zone the UK claims around this blasted rock, is viewed as little more than the application of common sense; an expression of obvious sovereignty.

The Irish Government’s reaction to this has been met by a measure of stupefaction in Edinburgh. Dark suggestions this must be part of some deep Brexit-related game are laughed at. The notion that the Westminster and Holyrood governments are capable of conniving together in this fashion fails to pass any kind of elementary political “smell test”.

It is true, however, that a muscular defence of Scottish fishing rights will do Nicola Sturgeon’s SNP government little harm. At the most recent UK general election, the SNP lost coastal constituencies in the northeast of Scotland to Ruth Davidson’s resurgent Conservatives. In general, these places, in which fishing remains a significant enterprise, are the most “Brexity” parts of Scotland.

Even so, Tánaiste Simon Coveney’s claim that “Some would suggest [this dispute] is part of the competition, politically, in Scotland between the SNP and the Conservative party” overstates matters to a significant degree. Ditto his contention that “perhaps this is a way of reclaiming the fishing industry politically”. And, viewed from north Britain, there is something mildly comical about his assertion that “Ireland is not going to be a pawn in this political game”.

If the SNP ever achieve its goal of independence, a newly sovereign Scotland would require all the international friends it can get. Ireland is the most obvious candidate

Sources inside the Scottish government insist this is no sudden escalation. Indeed, they are more puzzled by the manner in which, as they see it, Ireland has resisted coming to any accommodation.

“We’ve been pointing out for two years that the Irish are fishing inside the 12-mile zone” one source close to Sturgeon said. “We don’t want to enforce this; we want to find an agreement.” But without a negotiated accommodation the Scottish government feels it has little choice but to protect the interests of its fishing fleet.

These government sources argue that Edinburgh is merely responding to Irish provocation and an increase in Irish vessels inside the exclusion zone. They do not rule out an agreement which might permit some Irish fishing around Rockall but stress this must be negotiated to the satisfaction of both parties.

Even so, the longer-term interests of the SNP would be better served by avoiding disputes with a neighbouring country Scotland looks to as both peer and inspiration. Ever since the Brexit referendum, the SNP has contrasted Remain-voting Scotland’s powerlessness with independent Ireland’s ability to influence the rest of the European Union to take account of Ireland’s particular, specific, Brexit-related interests.

As far as the Scottish government is concerned, this is a simple matter of applying and respecting international law. It is the Irish who are failing to respect that

In the future, moreover, and if the SNP were ever to achieve its goal of independence, a newly sovereign Scotland would require all the international friends it can get. Ireland is the most obvious candidate for such amity, not least because – despite their very different histories – avoiding a hard border with what’s left of the UK will be just as important to an independent Scotland as avoiding a hard border with Northern Ireland is to the Republic now.

Still, the SNP’s ambitions for EU membership cannot easily be squared with its promises to Scotland’s fishing communities that it will seek a “reformed” common fisheries policy as part of its admission talks. There is one obvious thing to say about this: good luck with that.

Neither government wishes to see this squall develop into a full-blown gale. Sources in Edinburgh are confident an agreement can be reached but insist, in the meantime, that Scottish fishing prerogatives must be respected. There is no need to send in the Royal Navy and nor is there any requirement to summon the ghosts of a maritime version of Edward Bruce.

Even so, the nature and depth of Dublin’s reaction to being warned off Rockall has surprised Edinburgh. As far as the Scottish government is concerned – and here, for once, it is in agreement with its Westminster counterpart – this is a simple matter of applying and respecting international law. It is the Irish who are failing to respect that.

In truth, Edinburgh and Dublin each have little to lose from this esoteric dispute. Each can make a play of standing up for their respective national interests; each knows that some form of agreement will, in time, be required. If the rules of politics demand a certain amount of posturing before that agreement can quietly be reached then so be it.

Alex Massie is a columnist and Scotland editor of the Spectator. He lives in Edinburgh

1 Covid-19 restrictions: Government prepares move to Level 5 for six weeks
2 Life under Level 5: What it would look like for the country
3 Doctors’ letter calls for new strategy to ‘co-exist’ with Covid-19
4 Life under Level 4: What will be closed under tighter restrictions?
5 Dr Muiris Houston: ‘For me, the most shocking Covid-19 statistic of all is this…’
Real news has value SUBSCRIBE