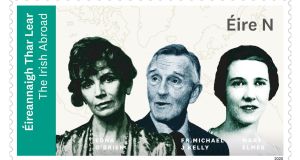 If you’re one of those people who still like to send an actual St Patrick’s Day card, you might find yourself licking a stamp this week. If so, you might discover that the one you’ve chosen has a priest on it, flanked by two women, one of them being the author Edna O’Brien.

It’s not something she, or indeed anyone, might have imagined after The Country Girls was banned in Ireland.

And in the meantime, Ireland and the world have moved on, dragged there kicking and screaming by the likes of O’Brien and Kelly.

The stamp is part of the Irish Abroad series produced by An Post to celebrate the diaspora.

O’Brien and Kelly have lived on different continents but share at least two things in common; they’ve lived their lives on their own terms, and have had a remarkable impact on the lives of many others.

Last week, at his home in Zambia, friends of Fr Kelly sent around food and two cakes to celebrate his appearance on the stamp.

As the Irishwoman’s Diary joined him in digging into beef stew and trifle, he said he felt completely overwhelmed.

“I feel that it’s almost unreal. After all, the stamps are in Ireland and I’m here. When I see them on an envelope I might feel more real about it”.

Fr Kelly thinks that his late brother Joe, also a Jesuit priest, would have been a more suitable companion for Edna on the stamp.

Fr Joe ministered at St Malachy’s, the actors’ chapel on Broadway. He influenced many of them, and when he died they had a caricature of him hung at the New York restaurant Sardis.

However, now that it is indeed he on the stamp, Fr Michael is delighted to be sharing it with two women (the other is Mary Elmes, who died in 2002, and who saved the lives of hundreds of Jewish children in Paris during the second World War).

“I know Edna O’Brien is still alive and I doubt she’ll be too happy to be on a stamp with a priest. I haven’t read her novels but I know she had serious brushes with the Catholic Church in her day.”

O’Brien remains active, producing challenging work, and was recently described as the most gifted woman now writing in English. Her latest book Girl, nominated for the Women’s Prize for Fiction, is set in Nigeria, portraying the harrowing experience of young girls at the hands of Boko Haram.

The Diary opines that it’s quite likely O’Brien would be fascinated that she’s sharing the stamp with Fr Kelly. “I hope so. I don’t know if you’d say it rightly or not, but I’m a bit of a feminist myself.”

That feminism comes from Kelly’s work in education in Zambia, where he saw how girls were left behind, and was determined to help them reach their potential.

He taught in the first school to admit girls to the sixth form, went on to become professor of education at the University of Zambia, wrote more than a dozen books, and is still a patron of Zambian Open Community Schools, funded by Irish Aid.

But it was the HIV/Aids epidemic of the 1980s that turned him into an advocate and activist, when he saw how the disease affected women and girls disproportionately.

Kelly doesn’t beat about the bush, and his next comments aren’t exactly what you’d expect to hear from a 90-year-old priest.

He is full of admiration for the way Catholic nuns were dealing with people in hospital. “I got my inspiration and my courage from them. They were going ahead and offering people condoms, which the priests wouldn’t do, the men wouldn’t do”.

Fr Kelly’s Zambian and Jesuit colleagues suddenly stand up and perform a Zambian song-and-dance routine to mark the release of the stamp, and produce one of the celebration cakes.

It would appear that his fellow priests hold him in high esteem despite his somewhat unconventional views.

“One one occasion I heard that the Zambian bishops wanted to send someone to reprimand me, but it never happened”.

And what about the Jesuits? “I think they thought, ‘He is of age, let him think and speak for himself’. I said in another interview I look forward to the day we might have a female pope, and I don’t expect anyone to reprimand me about that either”.

Surely Edna O’Brien would give that kind of thinking a stamp of approval.