Saturday was great, but now it’s time for a conversation about abortion

The citizens in Malahide said they want to know what abortion services might look like. It’s no longer about repeal 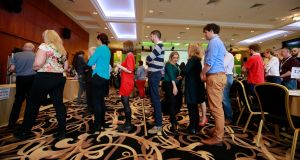 Members of the Citizens’ Assembly casting their vote at its final meeting on the topic of the Eighth Amendment of the Constitution on Saturday. Photograph Nick Bradshaw

There was shouting and screaming. The sounds were shrill. It was Saturday, just passed.

I was lying in my bed with the hangover of a 12-hour migraine: not quite there, not quite gone, but bad enough that the nausea and thumping of the rectus muscles behind the eye could easily be tipped back into full migraine explosion.

I learned, at that moment, the worst thing to do after a day of enforced digital detoxing was to pick up the phone and see what the world was up to. And the citizens out in Malahide. They’d been there all day. A penance next to migraine.

Twitter was the culprit behind all those sounds. There were confusing messages from the Justice. The first results were disappointing. They did not say repeal. All wrong. One Twitter commentator threw a warning shot: if people thought the Repeal movement was ‘angry’, they had not seen anything yet. There were loads of words in capital letters (code for shouting on Twitter). And there was a fair amount of swearing. Mainly fuck, in lower and upper case.

I remember, as a secondary student, watching a prayer vigil around a car with a statue of the Virgin on its roof. It was parked just outside the polling station for the 1983 referendum that resulted in the eighth.

By 1992, the little feet were back. I bumped into a former Senator with a pair on his lapel in the Leinster House Library. That was a time before politicians wore t-shirt with slogans in the Oireachtas.

Ten years later, and we were off again. When an embryo became an foetus was the critical sticking point: Was it before implantation, or after? After, of course. But there could be no rational debate. Ten seconds into a discourse and the shouting would begin.

The Church was all-present too. Some said the rosary. The pro-choice rallies chanted ‘get your rosary beads off our ovaries (please)’.

They were the days when anger and shouting were the preserve of groups like Youth Defence. I sat across from them in the High Court. They were granted the lifting of an injunction imposed when they stormed a family planning clinic. Within weeks, they stormed the clinic again and started to protect outside its doors on a weekly basis. Women and girls attending for reproductive health services felt intimidated. So did the staff. Security cameras were installed and the reception area was secured to keep the angry masses out.

Back in 2005, when working at a press conference to announce the lodgement of the ABC case with the European Court of Human Rights, I recall selecting a location carefully. One which has restricted access to prevent protesters storming in to sabotage the event. Despite our best efforts, brute force won out.

In February, one of Ireland’s most experienced crisis pregnancy counsellors passed away. It was an untimely death. Her quite voice will be missed because it was always calm and rational.

She edited a book of stories of women who had abortions. It was called ‘The Irish Journey’. No story was the same (apart from the travel piece). Their circumstances were all different. Sherie was clear that all of the women who shared their story were happy to do so because they were anonymised and because - as she put it - ‘abortion is a deeply personal issue’ and all of these women had made the ‘best decision for themselves’, and were now happy to get on with their lives.

There were other courageous and articulate voices back then too: Mary Banotti and Doctor Mary Henry stand out. Senator Ivana Bacik was sometimes a lonely voice.

The next referendum on abortion will be a game-changer. Finding the language; developing the legislation that will - effectively - replace the eighth; and using the tone of voice to bring middle Ireland along the way are the critical challenges of the pro-choice movement.

The debate has begun. Solid, informative debate - without shouting - will demonstrate that all sides have grown up after decades of referenda on abortion.

By Sunday, the citizens were being hailed. The people on Twitter were hugging them. The hot-headedness from the evening before had dissipated. The migraine was gone, but still needs to be held in check.

Now, let’s have a conversation about abortion.

Catherine Heaney is the Managing Director of DHR Communications. She writes in a personal capacity.

1 Seán O’Brien: Anger over my parents’ break-up has never left me
2 Why Waterford is ‘the best Covid county in Ireland’
3 Two hundred Irish retailers for all your online Christmas shopping
4 Sinn Féin’s stand on Covid is facing increasing questions from political rivals
5 We need to reverse our thinking on lockdown
Real news has value SUBSCRIBE