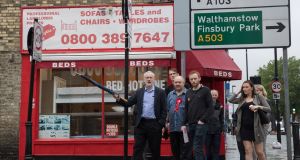 Labour Party leader Jeremy Corbyn walks with Labour Party activists as he leaves his home to cast his vote at a polling station at Pakeman Primary School in Islington on June 23, 2016 in London, England. (Photo by Matt Cardy/Getty Images)

At the time - London in late 1980s - I’d bump into him now and again at Islington Labour party meetings. He was (and still is) the MP for Islington North; I had worked on Chris Smith’s campaign to get elected in neighbouring Islington South.

The Irish question was close to Jeremy’s heart. As indeed was any “liberation” movement that was overseas and had easy-to-assemble ideas of “imperialism” and “solidarity”. And if there were lashings of free trade coffee from said country under the yoke of U.S. imperialism (and its running dogs) all the better.

Corbyn’s Labour Party has always been more about Daniel Ortega and Fidel Castro than Keir Hardie and Nye Bevan. It’s one of the reasons why, come June 8, he will lead his party to a worse electoral shellacking than that of Michael Foot in 1983. A dogmatic stubbornness coupled with a reductive/obsolete worldview tends to do that to a political leader.

The Islington Labour Party on which Corbyn cut his political teeth was an unpalatable mix of middle-class luvvies, bewildered old Trotskyites and Class War trustafarians.Corbyn thrived and prospered in this milieu of Solidarity Discos and fist-clenching gesturism.

His corduroy-trousered radicalism wherein every single thing wrong with the world can be put at the door of the U.S. and Israel is as relevant today as Duran Duran are to music and shoulder pads are to fashion.

The Islington Labour Party of the 1980’s was so achingly “right on” in its concern to “stand in solidarity with international liberation movements” that the fact that the borough had one of the highest child-poverty rates and the lowest life expectancy rates in the UK didn’t seem to exercise Corbyn as much as arranging meetings with terrorists.

Corbyn shouting “Smash The Tory State” into a megaphone on his beloved demos around the leafy streets of Islington followed by a jaunty speech about the “advancement of worker’s rights” in Latin America before a never-ending roll call of fraternal and sororal greetings to oppressed people in countries few of us even knew existed had a certain quaint appeal in the benighted Thatcher/Reagan era of the 1980s. But not now.

If back then he was a well-meaning ideological drone destined to only have a localised luvvie appeal, these days - courtesy of an asking-for-trouble £3 per vote leadership election - he is a leader of the opposition who has absolutely no purchase on the reality of voters lives.

The degeneration of Labour under Corbyn’s ideological time capsule policies is such that the Tories have moved from contempt to pity. Conservative MEP, Daniel Hannan wrote “Labour’s roots were not in revolution, but in brass bands and the temperance movement, in nonconformist churches and working men’s libraries. Its aim was not to pull people down, but to raise people up - to disperse power and spread opportunity as widely as possible” in pleading for a viable and functional Labour party if only to keep Theresa May honest.

But Corbyn’s Islington socialism has him not fighting Brexit and neoliberalism but Cold War battles long since gone.

There is a though a meaningful place for Jeremy Corbyn in British politics: and that place is in giving a three hour lecture about the dialectics of Hugo Chavez’s political reign in a draughty room above an Islington gastropub.

When an MP in your own party describes you as an “IRA supporting friend of Hamas” and droves of voters within your traditional industrial heartland desert you for the reactionary siren call of UKIP, you’re supposed to - metaphorically speaking - retire to the study with a stiff drink and a loaded revolver.

On the calling of the UK election this week, Corbyn announced he would be “riding an anti-establishment wave” during his campaign.