Saeb Erekat: Ireland must not be complicit in denial of Palestinian rights 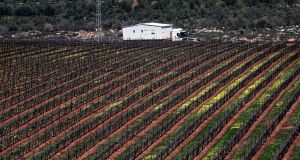 Amichai, the first new Israeli government-sanctioned settlement built in the Palestinian territories in some 25 years, mear the settlement of Shiloh, between the Palestinian cities of Ramallah and Nablus in the Israeli-occupied West Bank. Photograph: Ahmad Gharabli /AFP/Getty Images

When the Seanad debated a motion on January 30th to ban goods produced in Israeli settlements located on occupied territory, many saw this as Ireland fulfilling its commitment to international law.

The question is not whether Ireland, or any other country, should discuss banning Israeli “settlement products”. The real question is why, after 50 years of condemning the illegality of Israeli settlements, those products are still available to European consumers in general, and Irish consumers in particular.

European countries have to stop linking Palestinian’s rights under international law with the Middle East peace process. Regardless of how the peace process is going, Israeli settlements and their products are illegal; we have a right to assert that at any time in the process.

With or without the prospects of negotiations, we will continue to fight for our rights within the context of international law and responsibility it puts on Israel.

Those who argue that Ireland should take no action that would make the country “look biased” – such as recognising Palestine or banning settlement products – should be answering another question.

Did Europe’s refusal to recognise Palestine and its eschewing of tangible measures that would hold Israel to account for human rights and humanitarian law violations, manage to stop the settlements? At the very least, did this inaction bring the Israeli government to the negotiating table in good faith and in a meaningful way? The answer seems crystal clear: no.

It is time for the rest of the world to ask why most Israeli parties, with the exception of Meretz and the Arab-dominated Joint List, do not consider ending the Israeli occupation, or even coming to a peace deal, as a priority in their agenda.

The answer is because, in their calculations, Israel will continue to pay no price, and even to profit, from its occupation, notwithstanding the systematic violations of international law and UN resolutions. Under the current Israeli government and its recent predecessors, the gargantuan settlement enterprise has inflated three fold.

In fact, since the signing of the Oslo Accords in 1993, the number of settlers has grown at an accelerated rate and now exceeds 600,000 people. The size of the settler population is not the only indicator of the entrenchment and expansion of the Israeli settlement project. The physical footprint of Israel’s business activity in the Occupied West Bank, including East Jerusalem, is also now much larger.

The long-term damage from Israel’s colonial policies is extremely severe; today Israel’s exploitation of our natural resources and thew economic restrictions placed on Palestinians cost our economy billions of euro each year.

Take my hometown of Jericho as an example. It is a short drive to the Dead Sea and the Jordan Valley where you can see the beaches, natural resources, and fertile farmland that exclusively benefit the Israeli settler economy.

These settlements produce a significant percentage of Israel’s agricultural exports to Europe. These products are available in Ireland and Irish consumers are supporting the settlement enterprise through everyday purchases.

The Palestinian and Irish people share a proud and long history of collective struggle against foreign settler-colonialism in our respective attempts to assert sovereignty and gain independence. Similar to Ireland’s first efforts to gain independence in early 1919, almost a century later, Palestinians continue to endure disenfranchisement and dispossession. In Palestine, our fight continues against a colonial power that is abusive to our people, occupies our land, and takes our resources. Why would any country reward such illegal policies by buying their products or by allowing their companies to profit from the Israeli occupation?

Although the proposed Bill to ban trade with illegal settlements was not voted on, the fact that there was a discussion demonstrated its importance. None of those who participated in the Seanad debate questioned whether Israeli colonial settlements were in breach of international humanitarian law.

Yet, there are some people who believe that rhetoric will be sufficient to deter Israel. Again, Israeli actions have proved them wrong. On the contrary, Israel perceives the lack of action as an encouragement.

Let us be clear: buying settlement products not only encourages Israel to continue its illegal colonial enterprise, but it also makes the buyer complicit in the systematic denial of Palestinian rights.

Make no mistake: Ireland and the Irish people have always been leading champions of the Palestinian cause for self-determination. The Republic of Ireland stood firm in its criticism of the US decision to recognise Jerusalem as Israel’s capital and was one of 128 countries that declared their rejection of the US decision.

We are proud and grateful for Ireland’s firm and strong support to Palestine despite all the noise from adversaries. But, at this moment in history it is long overdue for the international community to stand on the right side of history by holding Israel accountable. This is the only way to save the prospects of a political solution. We believe that Ireland’s history provides you with the moral background to set the example in Europe.