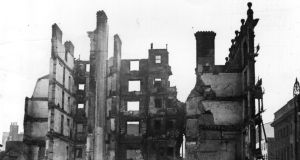 ‘The history of how and why power changed hands in Ireland between 1916 and 1921 cannot be massaged out of existence in order to pretend that a British government would have ceded power to a native Irish government without the use of violence.’ Dublin in ruins after the Easter Rising. Photograph: Topical Press Agency/Getty Images

Let me begin by seeking to dispel the sense of unease that seems to inhibit the constitutional parties from asserting their rightful claims to the legacy of 1916.

This inhibition is rooted in the incontrovertible historical fact that the 1916 Rising was the catalyst for a series of events that meant that the independent Irish State was born out of violence. Many of those who brought about that revolution – Patrick Pearse and Eamon de Valera are only two of numerous examples – were initially home rulers rather than advocates of physical force. But they despaired of constitutional nationalism when, despite three decades of unswerving adherence by the great majority of Irish nationalists to the processes of parliamentary democracy, the British government yielded to the Ulster Unionists’ threat of force and failed to put in place a home rule parliament in Dublin before the outbreak of the Great War.

The enactment of the Home Rule Bill in 1914 is much less historically significant than the fact that it was simultaneously suspended. There is not a shred of historical evidence to suggest that any British government would have implemented it in the form in which it was enacted; indeed the existing evidence points the other way.

The British Prime Minister, Henry Asquith, had spelt out the chilling implications of this failure of British parliamentary democracy to fulfil the legitimate aspirations of Ireland’s constitutional nationalists to King George V in the autumn of 1913. “The attainment of Home Rule [had] been for more than 30 years the political ideal of the Irish people”, he explained, and it was “the confident expectation of the vast bulk of the Irish people that it will become law next year.” If that expectation were yet again disappointed – as it had been in 1886 and in 1893 – the consequences “would extend into every department of political, social, agrarian and domestic life. It is not too much to say that Ireland would become ungovernable – unless by the application of forces and methods which would offend the conscience of Great Britain, and arouse the deepest resentment in all the self-governing Dominions of the Crown”‘

And that is precisely what happened when the Black and Tans and Auxiliaries ran amok in 1920-21.

This bald recital does not demand any approval, retrospective of otherwise, of the use of violence as a political instrument. But it does demand a recognition of historical reality. It also poses the fundamental question about the purpose of the commemoration of the Rising: should the blood then shed inhibit, even, perhaps, prohibit, the Irish Government from commemorating the seminal event on the path to absolute independence? Or, to put it another way, should we be ashamed of our independence because it was achieved through violence?

Garret FitzGerald asked in 2003 whether “Without the national revival of 1916-21 would Ireland ever have become a largely self-reliant country, seeking to run its own affairs in its own way? Or would it have shrunk as, regrettably, did Northern Ireland, into a dependent, economic provincialism, myopically preoccupied about its share of British subsidies and social welfare provisions?” – a question even more relevant today when Gerry Adams sees nothing humiliating in rattling his begging bowl before David Cameron and ludicrously insisting that Northern Ireland is entitled to a more generous welfare system than the rest of the United Kingdom.

A related question is whether, without the Irish revolution of 1916-21, complete independence in the shape of a sovereign, independent republic in everything but name could ever have been achieved as early as 1937. The independence then attained was affirmed by the all-party commitment to a policy of neutrality in the second World War.Then, in 1948, it was a Fine Gael taoiseach, John A Costello, who steered the Republic of Ireland Act through the Dáil and thereby removed any remaining ambiguity among all parties about sovereignty. Thereafter relations between the Irish and British governments have been conducted on the basis of absolute equality between sovereign states.

“It is not easy for a new state to concede sovereignty”, Garret FitzGerald also observed. But by 1972 the Irish were so secure in their sense of being a truly sovereign people that the proposal to embrace the European enterprise was endorsed by an overwhelming 83 per cent of the electorate in a referendum. His conclusion that Irish independence “was in fact secured almost at the latest date at which it could have been usefully achieved” is another reason why we should commemorate the 1916 Rising as the catalyst without which the status of an independent, sovereign state could not have been so soon achieved.

This is the residuary historical legacy of 1916. This is why it is so important that Fine Gael take pride in the role of the party’s founding fathers in the Irish revolution. So, too, should Fianna Fáil and Labour. For all three parties have their roots in 1916: Fine Gael and Fianna Fáil as component parts of the Sinn Féin party established in 1917 that won an overwhelming democratic mandate in the general election of 1918 and that split over the Treaty; Labour, too, has its roots in 1916 because of the role of its founder, James Connolly, one of the executed signatories of the Easter Proclamation. This is in striking contrast to the Sinn Féin party led by Gerry Adams which has no roots whatever in 1916: it was spawned instead in the bloody carnage of the Provisional IRA’s long war in Northern Ireland.

Enda Kenny understands this and when he recently spoke, not as Taoiseach but as the leader of Fine Gael, at the launch of Michael Laffan’s biography of WT Cosgrave he unashamedly asserted this party’s right to ownership of the legacy of 1916. “WT Cosgrave was always proud to be a 1916 man”, he said. “He saw the Rising as the central formative and defining act in the shaping of modern Ireland. Many of those who were leading figures in the parties he led, Cumann na nGaedheal and Fine Gael – Richard Mulcahy, Ernest Blythe, Desmond FitzGerald, Fionan Lynch and many others were also 1916 men and it was the unshakeable conviction of Cosgrave and the other founders of Cumann na nGaedheal that their party was a 1916 party and that it drew its inspiration from the memory of 1916. This too was the view of Liam Cosgrave when he led Fine Gael and it is my view and the view of the party that I have the honour to lead today.”

What was disappointing about that speech was its reception, for it seems to have fallen into a pool of silence. Such a ringing declaration should have echoed again and again in speeches delivered by other Fine Gael Ministers and Deputies who instead seem to have chosen that craven path identified by Seamus Heaney: “whatever you say, say nothing”. But it is not too late: the coming 99th anniversary of the Easter Rising will offer countless opportunities to remedy this omission.

In the last analysis, however, what matters most about Mr Kenny’s affirmation of the ownership of 1916 is not that he is the leader of the Fine Gael party but that he is Taoiseach. In that sense, he has already taken ownership of 1916 as the head of government much as Bertie Ahern did when he was taoiseach at the time of the 90th anniversary of the Easter Rising. For, as Mr Kenny also said in that landmark speech, “It is important to note that WT Cosgrave was neither narrow nor exclusive in his view. He had no difficulty in accepting Fianna Fáil’s claim to be a 1916 party also.” Neither does Mr. Kenny have such a difficulty. Nor will Micheál Martin. Nor, one hopes, will Joan Burton flinch from asserting the Labour’s party rightful share in this inheritance.

In the light of the looming general election, we do not know which parties will be in government at the moment of the centenary of 1916. But we should insist that whatever government will be in power must unwaveringly lead the nation, at home and abroad, in unabashed celebration of the seminal moment in the birth of the Irish republic.

Of those who think otherwise, may I simply ask this. In 1976, the 200th anniversary of the American Declaration of Independence, did the American government shrink from celebrating the bicentenary of the decisive moment in the birth of the United States because that state was born out of war? Does the French government shrink from the annual celebration of Bastille Day notwithstanding the appalling bloodshed of the French Revolution?

However much we may condemn political violence, we cannot dispute that it is an invariable component in wresting independence from colonial powers. The history of how and why power changed hands in Ireland between 1916 and 1921 cannot be massaged out of existence in order to pretend that a British government would have ceded power to a native Irish government without the use of violence. That the birth certificate of this state in common with that of so many other states, is stained with blood must not mean that 2016 cannot be an occasion for shameless celebration.

This article was first delivered in the form of an address to the Fine Gael National Conference at Castlebar on February 21st, 2015.

Ronan Fanning is Professor Emeritus of Modern History at University College Dublin; his biography of Éamon de Valera will be published by Faber & Faber in October 2015.