During a visit to Belfast recently, I was struck by the contrasting neutrality of the hand. 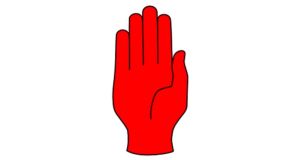 “The Red Hand, that ubiquitous symbol of Ulster, straddles the political and sectarian divide.”

The question of which foot you use while digging has in Ireland long had a significance that goes beyond matters of horticulture. But during a visit to Belfast recently, I was struck by the contrasting neutrality, in political symbolism, of the hand.

I’m thinking mainly of the Red Hand, that ubiquitous symbol of Ulster. Unlike most emblems, it straddles the political and sectarian divide.  And on both sides, it’s usually the right hand that’s depicted, although there are quite a few left hands scattered around Belfast on coats of arms and other insignia, with apparently equal indifference.

This is all the more surprising given that there are two competing explanations for the symbol’s origins. One is religious, referring to the hand of God (His right, invariably), a meaning mentioned in Milton’s Paradise Lost and a Nick Cave song, Red Right Hand, among other places.

By the law of averages (and most versions of the story), however, it was the invader’s right hand that did the chopping, and therefore his left that claimed the reward. Maybe that explains some of the left-hand versions in Belfast.  But then again, as far as I can see, loyalist murals, just like GAA insignia, tend to go with with the right.

Not that the Red Hand is entirely the property of Ulster. It used to symbolise Ireland in general. And again, this could be ambidextrous. You see lefty versions on, for example, old cap badges of the Irish Citizen Army. But I suppose there is a certain logic in that.

The foot question has its contradictions too. In the South, it is Protestants who are (or were) said to the dig with the left. In the North, the same claim was made of Catholics.  The point in both cases was that they were the minority.  Whichever foot they dug with it, it was the “wrong” one.

One the other other hand (no pun intended), that great student of Ireland’s idiosyncrasies, E Estyn Evans, once went into the subject in meticulous detail and found a depth of meaning in it that few who used the phrase could have suspected.

In his 1957 book, Irish Folk Ways, he wrote that most diggers in Ireland used the right foot – a habit reinforced by the traditional one-sided Irish spade, or “loy”, which unlike the English version, didn’t offer a choice.

But he added that, “in eastern Ireland, and particularly the Protestant districts of the north-east, the left foot is normally the digging-foot […] though the old Irish stocks continue to dig with the right”.

Evans’s book went so far as to include a helpful, hand-drawn map of Irish spade patterns, generally narrow and one-sided in the south and west (except Mayo), broader and two-sided elsewhere.

The Tyrone factory had recently closed, he noted.  And I suspect that the complexity of Irish spade technology had peaked by then. Even so, anyone who still thinks that “calling a spade a spade” is synonymous with verbal simplicity should read Irish Folk Ways.  For me, at least, it sheds new light on Seamus Heaney’s famous decision, circa 1966, to dig with a pen.

This has since become the norm in parliaments. Thus in Westminster, for example, the government (representing the establishment) sits to the right of the authority figure. But the Dáil, of course, is different.  Whether by accident or perversity, Irish governments insists on sitting to the Ceann Comhairle’s left.

1 How much coffee should I drink? How much is too much?
2 Gardaí investigating four-lane motorway sulky race
3 Social Democrats to abstain on all votes for taoiseach as Dáil resumes
4 I decided that day if I start working for myself at least I'll know where I stand
5 Newton Emerson: Under what conditions would FF or FG share power with SF?
Real news has value SUBSCRIBE