On Holocaust Memorial Day, we all recall sadly the murder of millions of Jews by Nazis 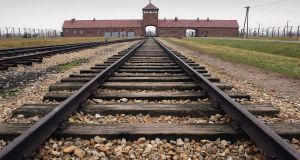 The railway tracks leading to the main gates at Auschwitz II – Birkenau: The more people who study this history the fewer excuses we will have as a society to fall into a similar trap. Photograph: Scott Barbour/Getty

As we prepare to commemorate Holocaust Memorial Day on January 27th, are we now too far removed in time for this event to be anything more than symbolism and how is this day significant for an Irish society that was historically uninvolved in the Holocaust and has a tiny Jewish population?

In 2005, the UN passed a resolution that Holocaust Memorial Day would be recognised on January 27th every year, a day that coincides with the liberation of Auschwitz concentration camp in southern Poland.

The EU and America recognise this date. Israel and a number of other countries commemorate the Holocaust in April (the day changes each year as it’s based on a lunar calendar) to coincide with the Warsaw Ghetto Uprising.

We live in a world that did not give us bodies to bury, graves to visit or trials to receive justice

There may be archive footage shown as well as more recent imagery from conflicts in Bosnia, Rwanda and the current refugee crisis unfolding in the Mediterranean. Intermittently, solemn music is played, candles are lit for all the minorities that were singled out by the Nazis, and prayers said by a rabbi and other religious leaders.

For those of us, like me, whose family was engulfed by those terrible years of destruction, Holocaust Memorial Day has enormous significance. Within our family, the Holocaust remains in living memory (my mother is a survivor) and, for us, the sense of identity and the confidence of belonging to a country, anchored by generational roots and a common culture no longer exists.

The Nazis wiped us off the map.

We live in a world that did not give us bodies to bury, graves to visit or trials to receive justice. We cannot grieve for our loved ones in the normal way. Justice is measured in abstract terms.

For example: the freedom to live in a country as a Jew, unmolested and even to have one’s reflections published in a national newspaper occasionally.

Holocaust Memorial Day affords us the brief opportunity to tell our stories in front of the great and the good, our own communities and the representatives of the government on equal terms.

To declare that we have survived, often in spite of the inhumane and uncaring policies of previous administrations, and that we live in our adoptive countries as residents or citizens to contribute to society and live a life protected by the law.

And in those brief moments we experience the only justice available; enough to draw some of the despair from our hearts and replace it with love. Enough to repair our hope in the backwash of sorrow we navigate.

The disturbing rise of anti-Semitism in Europe and America is almost entirely fuelled by the anti-immigration politics from the right and the left. That populist parties, who never offer anything to their base other than short-term bribes, are in vogue is hardly surprising.

Liberal democracy has not made its case sufficiently well over the last seven decades as the lopsided distribution of wealth has left millions of people in a parlous economic predicament. That Jews are among the minorities being scapegoated is depressingly predictable.

It’s clear that Holocaust education has a role to play in teaching humanity about the importance of human rights and how democracy is the best system of government to guarantee those rights to the individual.

The extensive documentation of the Holocaust, the relatively recent perspective we have with survivor testimony and the ongoing forensic analysis of this history allow us to understand ourselves and our behaviour, in extremis, with clarity if not total understanding.

The more people who study this history the fewer excuses we will have as a society to fall into a similar trap.

In Ireland, Holocaust Memorial Day takes place in the Mansion House in Dublin. The format mirrors the one already described. It’s greatly encouraging that Ireland, with no cultural connection to the Holocaust is committed to such a commemoration.

The Holocaust is a dark, challenging and impossibly complicated event that represents all human behaviour and belongs to all humanity. It will never stop informing us.

The most compelling voices belong to the survivors, for they are best-placed to speak for the silenced millions. I hope that people listen to their universal stories, the last precious eye witnesses who will soon be gone.

For then the next generation, alone, will have to carry the torch. I believe we can make people everywhere think differently about their own behaviour, including in Ireland.