Reformation’s lesson can spur Christian faiths to work together 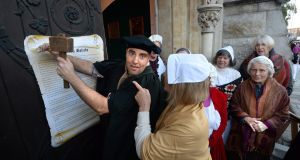 Patrick Rogers is challenged by Madeline Stringer and members of the Unitarian Church on the 500th anniversary of Martin Luther nailing his theses to the Wittenberg church door in 1517, re-enacted on St Stephen’s Green. Photograph: Cyril Byrne

Although October 31st, 1517, is usually regarded as the starting point of the Protestant Reformation, with the nailing of the ninety-five theses to the door of the Castle Church in Wittenberg by Martin Luther, what we might call “reformation thinking” within the western church had begun well before that date.

In the 14th century, John Wycliffe – an English philosopher and priest – had disputed a number of central Catholic doctrines and he was also instrumental in the production of the first translation of the Bible into the vernacular of his time. He was posthumously condemned as a heretic by the Council of Constance early in the 15th century.

The radical Czech reformer Jan Hus was burnt at the stake by decree of the same council. Hus in particular became a major influence on the 16th-century continental Reformation.

What may, however, be said of Luther’s protest – the 500th anniversary of which is now being celebrated – is that this was the point at which the Reformation took on an unstoppable momentum. New technologies in printing allowed ideas and ideologies to travel further and more rapidly than ever before.

The culture of the European Renaissance meant that new modes of thinking about the world and God were suddenly energised.

Other reformations followed quickly on the heels of the Lutheran Reformation, among them the Zwinglian, Calvinist and Anglican reformations, but it should also be remembered that the Council of Trent within the Roman Catholic Church was designed not simply for consolidation, but also for a reformation of the church.

Probably inevitably, as we look back from the perspective of half a millennium, we can see not only the wholesome but also the far-from-wholesome fruits that sprang from the reformation movements of the 16th century.

There was, of course, the wonderful and welcome return – across all the reformed traditions – to an affirmation of the Hebrew and Christian scriptures as foundational for Christian belief. Equally there was a renewed emphasis on personal faith in Jesus Christ as fundamental to a life of committed discipleship.

Personal faith may, however, readily become individualistic faith, and with individualism comes the tendency to a fissuring of communities, something to which the reformed traditions have become sadly accustomed.

It has also been argued persuasively (initially by the sociologist Max Weber and the historian RH Tawney in the earlier part of the 20th century) that modern capitalism, with the individualism inherent within it, has its origins in 16th-century reformation thought.

We might add that the new norm of cuius regio, eius religio (meaning that the religion for the state and its population is the choice of its ruler) which quickly followed from the Reformation contributed to the terrible “wars of religion” that plagued Europe for a century and more, but also had longer-term consequences.

It resulted in many religious minorities in different countries feeling immensely threatened, because they were under suspicion (if not the object of direct persecution) as potential subversives.

Where then, may we take the Reformation from here? We should perhaps return with more energy and seriousness to what is called the Lund Principle. This was the principle enunciated by the World Council of Churches in 1948, which affirmed that different Christian traditions should work together in all matters except in those where significant differences of conviction compel them to act separately.

This principle presumes, of course, that each tradition regards those of other Christian traditions as being fundamentally “on the same side”, the side of Christ, and we should accept that this is not axiomatic for some Christian believers in this country.

However there is, I believe, an increasing acceptance among many Christian disciples in Ireland that although important differences both in doctrinal emphases and in ecclesiological basics may remain, we can and should work together, so far as we can, in a shared witness to an increasingly unbelieving world.

There is also much that we may all receive thankfully as gift from the Reformation, primarily that we must each take personal responsibility for our life in Christ, while also understanding this individual life as being within community – within the life of Christ’s Body, the church.

We should also accept that, whereas sadly we may not all yet be able to share the bread of the Eucharist, we should nevertheless join with genuine enthusiasm to share the Word of God – as attested to in the scriptures – without any diminution in conscience or principle.

The One, Holy, Catholic and Apostolic Church, in which many of us express confident belief whenever we proclaim the Nicene Creed is not our possession, it is God’s. It remains our God-given task to work together towards its fullest expression in the life of this world.