Protecting democracy: Law on political funding must be made even stronger 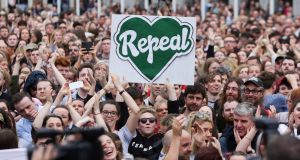 Sipo Act did not silence campaigners to repeal the Eighth Amendment: they raised €500,000 in a week while complying with the law. Photograph: Gareth Chaney Collins

The Standards in Public Office law is a good law. It must be strengthened, not weakened. Inspired by the tribunals into political corruption, it protects our democracy from the undue influence of big money. It facilitates a battle of ideas and not a battle of bank accounts.

The Act tries to balance two rights. Those with access to big money have the right to freedom of expression; the rest of us have the right to take part, on the basis of equality, in the conduct of public affairs.

The Act allows you to raise any amount of money in a year to influence public policy, once each donation is under €2,500.

But it has a number of weaknesses. A group has to declare its funders only if it accepts a political donation of over €100. And wealthy bodies can just use their own money. Also the Catholic Church and some campaign groups can claim that donations were not for political purposes.

The Standards in Public Office (Sipo ) Commission wants this changed so that a body must declare its funders whenever it spends a certain amount on political purposes, maybe €5,000. This would be a more objective test.

There should be further changes. The law must be modernised to cover international social media campaigns that can influence our democracy from abroad. And details should be published immediately of political spending, donations, and sources, above a certain threshold.

We must also protect the Act as it stands. Last year three lobby groups (the Irish Council for Civil Liberties, Transparency International and Amnesty) asked the Minister to weaken the law so that it would only apply to campaign groups during elections and referendums.

Doing so would be a victory for big money political donations. Most political influence is bought outside of elections. In addition, it is old-fashioned and authoritarian to see democracy as being something that happens only during elections.

These lobby groups claim the Act is silencing civil society groups. But it has not silenced Atheist Ireland. We just comply with it, and continue our work. And it did not silence campaigners to repeal the Eighth Amendment, who raised €500,000 in a week while complying with the law.

These lobbyists also claim that the law would be too complex for small bodies like residents associations to administer. But they administer such complexities as public liability insurance. In any case, the proposed change from donations to spending would address this concern.

Those seeking changes to the Act also claim that the definition of political purposes was never intended to apply, as it does, to campaign groups.

But when the Electoral Act was amended in 2001, Bobby Molloy said: “The definition of political purposes is also important to bring some certainty and parameters to the scope of the law . . . The definition of third parties is also new and it relates to bringing campaign groups within the control on donation limits.”

The Oireachtas has since amended the Act twice. Each time, it has strengthened the law, not weakened it. In 2012, it strengthened the funding restrictions. In 2015, it gave the Sipo Commission more enforcement powers. Clearly the Oireachtas intended, and still intends, the law to apply to campaign groups.

The commission recently apologised to Amnesty for using procedurally flawed processes when directing Amnesty to return a donation.

The commission does not discuss with one body its compliance dealings with another body. But it did confirm to us that the law has not changed, and it clarified for us our obligations under the law.

The law still applies all of the time, and not just during elections or referendums. Foreign donations are still subject to the same restrictions. There are no subject-based exemptions such as promoting human rights. And the donor does not have to explicitly call a donation political. It just has to be given for a purpose that the law defines as political.

Atheist Ireland supports the Sipo Commission’s position even though it has required us to turn down large donations in the run-up to the referendum on blasphemy due later this year . We have, however, asked the commission to investigate the funding of the Catholic Church, which runs our schools and lobbies our politicians, and other groups that campaign to influence public policy.

We all have the right to take part in our democracy, on the basis of equality, and free from the undue influence of big money donations to politically active religions and campaign groups.

5 Air fryers: How good are they, really, and what can you cook in them?