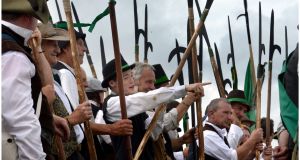 A 2013 reenactment of the Battle of Vinegar Hill in Enniscorthy, Co Wexford. Photograph: Brenda Fitzsimons

In the French ambassador’s back garden last week, I fell in with some affable Mayo men and, while we chatted, expressed admiration for their lapel pins.

The pins turned out to be miniature pikes, marking the wearers as members of In Humbert’s Footsteps. This is a (national award-winning) heritage group dedicated to commemorating the Year of the French, 1798, when Gen Humbert and his pike-wielding Irish volunteers established a short-lived Republic of Connacht.

Well, one thing led to another, as it does in diplomats’ gardens. So in response to my interest, the group leader, musician and historian Steve Dunford, promised to send me a pin. And this week, sure enough, it arrived in the post, accompanied by his exhortation to “wear it with pride”.

Which of course I will. But now I’m slightly worried about what my obligations as an honorary pike-wielder involve and whether, when I used the phrase “fell in” back there in the first paragraph, my new comrades might take it literally.

It’s not that I expect us to have to march on Castlebar any time soon. On the other hand, “General Dunford” (as he signed the communication – jocosely, I think) and his colleagues specialise in costumed military re-enactments. And I know from second-hand experience that even those can be dangerous.

Two years ago, in Waterloo, I interviewed the Duke of Wellington after he had again narrowly defeated Napoleon in a 200th anniversary recreation of the battle, which included 5,000 uniformed volunteers (including the aforesaid Mayo men).

In real-life, Wellington was a New Zealand-born actor, Alan Larson. And in real-life also, he had a scar on his neck: the souvenir of an American Civil War reenactment once, when somebody left a ram-rod in a rifle barrel, which was then turned into a missile by the all-too-real gunpowder.

To make things worse, if I recall correctly, it was “friendly fire”. His carotid artery rearranged, Larson somehow survived.

A reenactment involving pikes would not be so perilous, I suppose. The biggest danger might be some Mayo GAA supporter finally cracking under the pressure of another defeat and forgetting to put his pike’s safety catch on.

Strange to say, the pike is not among the farm implements celebrated in the French Revolutionary Calendar

Even so, I’d be nervous about getting called up for a reenactment in August or September – the time of year when Humbert invasions, and Mayo’s attempts to win an All-Ireland, both end badly.

Strange to say, the pike is not among the farm implements celebrated in the French Revolutionary Calendar. This was the short-lived experiment of the 1790s by which the old ecclesiastical calendar was abolished and replaced by a new one based on France’s agricultural economy.

In each of its 10-day weeks, eight days celebrated a named plant or vegetable. Every fifth day was dedicated to a farm animal; every tenth a tool of work.

As revolutionary diehards among you will know, this would have been the month of Prairial. And when I got home last week after my enlistment by the Humbert brigade, naturally, I checked the date in Jacobin terms. There were, as I say, no pikes in the calendar.

But somewhat ominously, it was the day of the “Pitchfork”.

*** The garden party marked a farewell to Ireland by the popular ambassador Jean-Pierre Thébault, who returns to France shortly. He was an inspired choice for the Irish mission, coming as he does from a town that has traditionally rivalled Paris as this country’s favourite French tourist destination. I refer of course to Lourdes.

It’s a well-known fact that, wherever people from this country gather – especially women – they can be mobilised at a moment’s notice to perform the Siege of Ennis

Perhaps he deserves credit for the reviewed economic miracle that happened here during his stay. But as head of France’s charm offensive in Ireland, he had competition at last week’s event from his own 10-year-old daughter who, as it happened, was also celebrating her birthday.

By virtue of her party piece, the birthday girl earned honorary membership of a great Irish movement about which I have written here before. It’s a well-known fact that, wherever people from this country gather – especially women – they can be mobilised at a moment’s notice to perform the Siege of Ennis, Walls of Limerick, or any number of quasi-military manoeuvres set to music.

And as as she took leave of her adopted country, young Mlle Thébault revealed herself to be a fully trained member of this crack corps, joining several of her friends in a foot-perfect Riverdance that left even the pike-wearers quite disarmed.

She now goes forth to serve the greater glory of Ireland, in a global dancing empire on which the sun never sets.

1 Gardaí believe men in Cork murder-suicide chose to let woman survive
2 Supermarkets compared: How Dunnes, Lidl, Tesco and M&S measure up
3 Richard Ford: America could fail. I have never felt this way before
4 ‘In Crete I pay 70% less than I paid for a shoebox apartment in Dublin’s docklands’
5 Ireland ‘outperforming almost all European countries in controlling spread of Covid-19’
Real news has value SUBSCRIBE