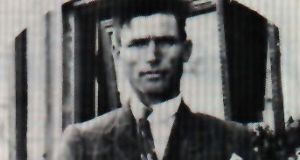 Seventy years ago this week, during the windy night of January 30th, 1948, a wall collapsed onto a man who had been tying his shoelaces at Dublin’s Back Lane, near Cornmarket. He was paralysed as a result, and never recovered his health before dying two years later, aged 42, in St Vincent’s Hospital.

The man was Johnny Doran, whose name was already famous then in traditional music circles. He was a master uilleann piper, as were his brother and father. They were all descended from John Cash – “Cash the Piper” – a 19th-century virtuoso.

And among other things, all were noted their unusual ability to play the instrument while standing, resting it on a propped-up knee.

In short, Doran was musical royalty. But he was also a member of the Travelling community, as it was not then known.

He had spent his short, impoverished life touring Ireland by horse-drawn caravan, playing from fair to fair. His caravan was parked at a derelict site in Dublin’s Liberties the night the wall fell.

There was a sad postscript to that event four years later, as recorded in a brief item in this newspaper, under the headline “Killed while trespassing”.

But Mr Justice Kingsmill Moore ruled that since the dead man had been trespassing, the Corporation’s only duty was “not to injure him intentionally”. He rejected the claim “and gave costs against Mrs Doran”.

If there was a consolation in Doran’s tragic death, it is that he had been properly recorded for the first and only time months earlier

Johnny Doran’s influence on traditional music, and piping in particular, is hard to calculate.

One measure, however, was that he was the first uilleann piper ever seen by Willie Clancy, the great Clare musician, born a century ago this year, whose own subsequent fame led to the annual summer school in Milltown Malbay, now a traditional music equivalent of the Hajj.

If there was a consolation in Doran’s tragic death, it is that he had been properly recorded for the first and only time months earlier.

Noting that the piper’s health was already failing, a Capel Street music shop owner John Kelly – himself a well-known fiddler and concertina player – persuaded the Irish Folklore Commission to get Doran into a studio in 1947.

The resultant session featured nine pieces of music, including such standards as An Chúileann and The Blackbird, and is a treasured piece of piping heritage now.

Still, at the time of Doran’s death and for two decades afterwards, traditional music was in severe decline. Pipers especially were a threatened species.

By the mid-1960s, there were only about 100 left, most of them old, and so few makers of the instrument you could count them on one hand.

Then the tide turned, and a key factor in its turning was the establishment of Na Píobairí Uilleann in 1968, which aimed to promote the playing and construction of pipes. On both scores, the results have been spectacular.

This was the excuse for a celebratory concert at the Abbey Theatre in Dublin earlier this week, when Na Píobairí Uilleann showcased the instrument before a full house, including the President

A new generation of pipers went forth and multiplied, so that there are now some 6,000 worldwide, including many who have little or no connection with Ireland except a fondness for the instrument.

The number of makers, meanwhile, has expanded to about 40, but it’s a measure of the success of the revival that there still aren’t enough.

Piping’s latest triumph was its inscription before Christmas in Unesco’s list of the “Intangible Cultural Heritage of Humanity”.

This was the excuse for a celebratory concert at the Abbey Theatre in Dublin earlier this week, when Na Píobairí Uilleann showcased the instrument before a full house, including the President.

It was a tour de force, demonstrating the breadth of the playing population, which now embraces every age group, all the main genders, and several continents. Among the stand-out performers were Joey Abarta, from the Southern California tradition of piping (via Japan), who played The Blackbird while his fiancée, Bostonian Jaclyn O’Riley, step-danced.

The pipes on show included a set from 1760, among the oldest known. At the other end of the chronological spectrum, meanwhile, were three gifted teenage performers: Jane Walls, Max Crowley, and Amy Campbell. The last-mentioned is blind, but already well on the way to mastery of her instrument.

Many of these will be on duty again later this year, when Na Píobairí Uilleann celebrates its 50th anniversary and Willie Clancy’s centenary is commemorated.

This week’s concert was mainly about marking the Unesco milestone. And I’m not sure anyone involved realised the date’s sombre significance, but as the performers lined up on stage at the end to take their bow, it was 70 years to the night since the curtain descended on poor Johnny Doran.

1 Why our love for Leo is withering on the vine
2 No obvious signs of injury on remains of McGinley children
3 The five ‘hidden’ reasons that stopped me losing weight
4 Snow expected as Met Éireann issues status yellow weather alert
5 Dancing with the Stars: Glenda Gilson sinks like Titanic
Real news has value SUBSCRIBE