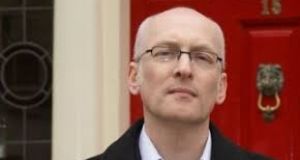 ‘Since my own story became public I have heard from many other church members about harrowing tales of church mistreatment of gay people,’ says Steven Smyrl

The mother of the late RTÉ broadcaster Marian Finucane was a devout Roman Catholic, a daily Mass goer, who never questioned church authority until she experienced at first-hand how those who didn’t fit her church’s ideal were not just marginalised, or even ostracised, but were openly, publicly disparaged.

Everything changed for Maura Finucane when, in the 1960s at a First Communion service, she witnessed Archbishop John Charles McQuaid single out an “illegitimate” child in order to publicly humiliate that child and its unmarried mother. In recent years we have grown used to such harrowing tales, though recognising they belong to another, earlier time.

Alas, if only this were so. At its 2018 General Assembly meeting in Belfast, the Presbyterian Church in Ireland appeared to reprise McQuaid’s shocking actions when it controversially adopted a resolution subsequently decried as homophobic.

Which of us can in all honesty exhibit a truly credible profession of faith if sin of any nature can disqualify?

Due to their supposed “outward conduct and lifestyle”, lesbian and gay people were excluded from Communion and their children denied Baptism. Astonishingly, because it is “religion” this sort of othering, which diminishes lives, can still be openly inflicted without fear of legal reprisal.

At the time, many spoke passionately against adopting this divisive resolution. I know this, because I was there. It was my last General Assembly.

Subsequently, in 2019, I was dismissed as a church elder in Dublin by a Presbytery commission. My crime? I exercised my constitutional right as an Irish citizen to marry my wonderful, loving, faithful same-sex partner of 20 years standing.

After the avalanche of adverse publicity the resolution attracted, the church last autumn circulated two draft policy documents, with the end of this month as deadline for comment.

These are Credible Profession of Faith and Admission to the Sacraments: A Framework for Discussion for Kirk Sessions; and Guidelines for Pastoral Care of Same-Sex Attracted People and Their Families. As the very first victim to have fallen foul of the resolution, this is my personal response to those documents.

The first document is a crass attempt to retrospectively justify the homophobic nature of the 2018 resolution, which begs this question: which of us can in all honesty exhibit a truly credible profession of faith if sin of any nature can disqualify? And this being the case, then who among us is qualified to judge?

Certainly not the authors of the homophobic resolution passed in 2018.

The second document is equally blatant in its attempt to justify discrimination. When I read this line on page 14, I laughed aloud at the hypocrisy: “As a Church we want to be aware of the impact words and actions can have on a person’s mental wellbeing and to practice appropriate sensitivity.”

No such consideration was ever afforded me by either the Presbytery commission or the presbytery itself. The Presbyterian Church in Ireland is not without existing pastoral guidelines on homosexuality, dating back to a resolution passed at the 2006 General Assembly.

Perhaps tentatively recognising its own institutionalised homophobia, the very first line of these existing guidelines acknowledges that “while a person’s sexuality is a very important part of their lives, it does not define who they are.”

They are also brutally honest in noting a litany of homophobic attitudes displayed by so-called Christians, which victimise and diminish.

In my own opinion, they were compiled by the wrong people. Scriptural knowledge alone equips no one to pronounce definitively on matters of sexuality and gender and anyone who claims otherwise is simply self-deluded.

Rather than engage with our Scottish brethren, the Presbyterian Church in Ireland has, with an ugly display of petulance, chosen to cut them adrift

While the proposed new guidelines draw on personal testimonies, not surprisingly these are self-serving, supporting a one-sided, skewed interpretation of scripture. But the Presbyterian church should know this: since my own story became public I have heard from many other church members about harrowing tales of church mistreatment of gay people.

Such mistreatment is acknowledged in the existing 2006 guidelines which say “there has been a lack of understanding, compassion and grace. People with same-sex attractions have found that they have not been treated with the same compassion as those who have presented other pastoral needs, including those sexual in nature.”

Yet, there exists more than one theology on homosexuality. After years of careful discernment, the Presbyterian Church in Ireland’s mother church, the Church of Scotland, has come to accommodate different views on same-sex relationships, founded upon sincere scriptural reflection.

But rather than engage with our Scottish brethren, the Presbyterian Church in Ireland has, with an ugly display of petulance, chosen to cut them adrift. Refusing to discuss important issues resolves nothing. I urge the rejection of the two draft documents in favour of a long-overdue open and honest debate.

The Presbyterian Church in Ireland could try to restore its own credibility by publicly recognising the inhumanity it has inflicted upon gay people over many decades, and resolve to do better.

Steven Smyrl lives in Dublin with his spouse, Roy Stanley. Both are members of the United Presbyterian & Methodist Church, Sandymount, Dublin.