Politically motivated reform will not give us better judges 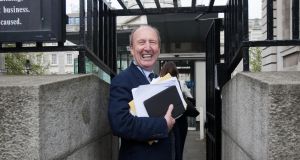 Shane Ross TD. Changes to the judicial appointment process was a condition of his support for the Government. Photo: Gareth Chaney Collins

Irish governments have twice tried to change the way judges are selected. The first time was in 1994 when the coalition promised legislation to set up the Judicial Appointments Advisory Board to screen and recommend suitable candidates to government.

The second time is now. The new government is committed to replacing the board with a nearly identical body, the Judicial Appointments Commission, to perform the same function. ,The new commitment is to change the composition of the board and its outputs. These are fine, but not at all necessary, changes. They do nothing to address the real procedural deficiencies in the board.

Both political commitments followed a political crisis. The first, in 1994, followed a breakdown in trust between coalition partners culminating in irreparable divisions over a series of judicial appointments. The second, this year, was a condition for the creation of the minority government.

Does it matter? Yes, because the reasons government have for introducing institutional reforms can tell us how effective those reforms are likely to be. It also matters because time is quite precious in government and should be used to best effect.

Ireland is a stable constitutional democracy with very high levels of judicial independence. The current system for judicial selection, as designed in statute, offers a good model for combining the best of external screening, while leaving sufficient discretion to politicians to make decisions about who should be a judge.

Politicians, as our chosen representatives, should be free to make some political decisions in relation to courts – for example that there are not enough women judges or a need for more judges with family law experience or judges from a particular religious or ethnic background so as to be more reflective of society.

The reality is political involvement in recruitment of judges is not just desirable, but a constitutional and democratic imperative. In Ireland we already have a system that can offer a really good outcome.

However, significant process improvements are urgently required to enable the board to function optimally. Unfortunately, the board did not use the range of powers given to it to assess judicial candidates, was not provided with sufficient secretarial or professional supports and suffered from a substantial absence of process and Oireachtas supervision.

In addition to this, the board made a surprising, and rather crippling, change of strategy when, at its own behest in the early 2000s, it decided to change its process for recommending judges.

Instead of performing a careful selection that would recommend the seven (or less) most suitable and best candidates as provided in law, the board decided it would approve all applicants deemed not to be explicitly “unsuitable”. In effect, this removed the opportunity for carefully weighted external analysis of judicial candidates. The number of names recommended to government increased from about seven to roughly 20, 50 or 100 names for a High Court, Circuit Court or District Court vacancy respectively. As a consequence of the changed processes and a failure of the Oireachtas to closely supervise the implementation of the legislation governing judicial selection, we now have too little professional screening and too much political involvement in choosing judges.

Political energy should now be devoted to ensuring the board works the way it was designed. Instead of concentrating on that, and in an misplaced effort to remove elected representatives from judicial selection, there is a commitment in the current programme for government to reduce as far as constitutionally possible the number of candidates from which government can choose judges.

The problem in judicial selection today is an absence of professional, fair, credible procedures. What is needed is robust professional assessment processes performed by the board and supported by the Public Appointment Service, involving expert screening, interviews and practical assessments of judicial candidates.

The solution is procedural reform, not legislative reform. The impact of the political pressure within government today is that the energy of the politicians, the civil servants, the drafters within the Department of Justice and the Office of the Attorney General, not to mention the time and energy of politicians and staff in the Dáil, Seanad and the Oireachtas Justice Committee, will be spent on the legislative side of reform of judicial selection. This without addressing the only reform that will really make a difference – the hard, unglamorous yards of procedural development that are now needed to have a fair and transparent judicial selection process.

Jennifer Carroll MacNeill is is a barrister and former legal adviser to ministers Frances Fitzgerald and Alan Shatter. Her book The Politics of Judicial Selection in Ireland has just been published