Poland’s Holocaust law is a licence to whitewash history 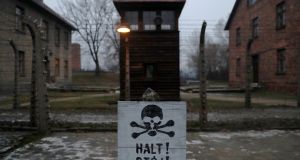 At least three million Polish Jews – almost the entire Jewish population of Poland before the war – were murdered at Auschwitz and other death camps. Photograph: Kacper Pempel/Reuters

They are placenames that will chill the heart for centuries to come: Auschwitz, Sobibor, Treblinka, Majdanek. They are the death camps where the genocide of European Jewry was perpetrated during the second World War in a crime known as the Holocaust.

These places are in Poland, a country with a history more terrible than any other in Europe. A fundamental fact about the crimes committed in these death camps is that, though the camps are in Poland, the criminals were German: the Nazis. Yet the term “Polish death camps” persists, more than 75 years after the Holocaust.

There is no such thing as “Polish death camps”. There are Nazi death camps located in Poland. In 2012, then US president Barack Obama referred to “Polish death camps” in a speech, drawing a rebuke from Warsaw. He apologised. According to the British historian Timothy Garton Ash, even German television, which ought to know better, has made the error.

Not only does the phrase “Polish death camps” imply Polish complicity – at the very least – in the Holocaust. It obscures other important facts about Poland’s heroic war-time role – that, unlike other Nazi-occupied countries in Europe, it fiercely resisted the Nazis, and it did not set up a collaborationist regime during the war. Poles are right to be angry about this distortion of history.

At the end of January the parliament in Warsaw passed legislation aimed primarily at trying to stamp out use of the term “Polish death camps”. The measure imposes a penalty, ranging from a fine to up to three years in prison, upon anybody who uses it.

The text of the legislation reads (in part): “Whoever publicly and untruthfully assigns responsibility or co-responsibility to the Polish nation or the Polish state for Nazi crimes committed by the Third German Reich […] or for other crimes constituting crimes against peace, crimes against humanity, or war crimes, or in some other way markedly diminishes the responsibility of the true perpetrators of these crimes is subject to a fine or imprisonment for up to three years.”

The Polish government insists the legislation is essential to counter the misrepresentation of Poland’s role in the war. It also insists that the measure will not affect freedom of speech or prevent historians and artists from studying and writing about the Holocaust. Poland’s president, Andrzej Duda, has indicated he will sign the legislation into law.

Approval of the legislation by the Polish parliament has drawn a furious reaction from Israel, which argues that it is tantamount to Holocaust denial. The US state department has warned of the potential damage that will be done to US-Polish relations – Washington is a close ally of both Poland and Israel.

The measure adds another dimension to Warsaw’s feud with the EU over its stumbling transition to democracy, and is certain to inflame the internal divisions in Poland between nationalists and social democrats.

Objections to the proposed Polish law are justified. No matter how sympathetic one is to the tragic history of Poland over the past two centuries, one cannot accept that the measure is reasonable, necessary, or wise.

Not only is it an attempt to impose politics upon the writing of history; it is dressing up nationalism as patriotism. The claim that the proposed law will not interfere with historical investigation is disingenuous. It is difficult to see how historians can continue to excavate the darkest corners of Polish history with the threat of imprisonment hanging over them. It is a licence for the whitewashing of Polish history.

One of the tragedies of Poland is that the Holocaust took place on its soil. At least three million Polish Jews – almost the entire Jewish population of Poland before the war – were murdered at Auschwitz and other death camps. Moreover, about 2.5 million non-Jewish Poles were also killed by the Nazis.

But not all the Jews of Poland who perished in Poland were killed by the Nazis.

As the Polish-American historian Jan Gross demonstrated nearly 20 years ago, some Poles were guilty of murdering Jews without any encouragement from the Nazis.

His book Neighbours recounts what happened in 1941 in the town of Jedwabne, in eastern Poland, where at least 350 Jewish men, women and children were burned to death by their Polish neighbours one afternoon. The neighbours insisted after the crime was discovered that it was committed by the Nazis. Gross demonstrated that this was a lie.

The Polish historian Jan Grabowski has documented how some Poles betrayed their Jewish neighbours to the Nazis throughout the war, often for pitiful rewards such as food for sheer survival. One question raised by the proposed Polish law is whether historians of Poland can continue to investigate such incidents without being accused of slandering the Polish nation.

The collaboration of individual Poles with the Nazis during the war is an uncomfortable fact that the proposed law threatens to deny. Poland’s relationship to the Holocaust is complicated – how could it be otherwise?

By passing this legislation, the hardline nationalists who dominate the Polish government under the country’s de facto leader, Jaroslaw Kaczynski, are seeking to restrict the boundaries within which that relationship can be studied and debated.

The history of Poland in the 20th century is both tragic and heroic. The Poles resisted not only Nazism but Stalinism, and were instrumental in the defeat of both totalitarianisms.

The proposed law on stamping out references to “Polish death camps” emphasises the heroism at the expense of the tragedy. It is not only unwise and unjust: it is unnecessary.

5 I spent a year testing eye creams: here is what works