Pitch Battles – An Irishman’s Diary about an ancient tune given new life, via a marriage between uilleann pipes and orchestra 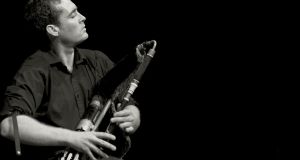 The 17th-century Gaelic warrior Alisdair MacColla is now all but forgotten, except to specialist historians. But he made a big impression in his time, it seems, especially on women. And he lives on today in spirit, albeit unnamed, in several pieces of music still widely played.

From a family that straddled Antrim and the western isles of Scotland, MacColla (full name Alaisdair MacColla Chiotach MacDhómhnaill, aka “Allistrim”) has something in common with a more recent military hero who died young, Michael Collins.

MacColla too met his end in West Cork, or Northwest Cork anyway, at the Battle of Knocknanuss in 1647. And it was this event that produced the greatest outpouring both of music, and of female grief.

Commemorative tunes include Allistrim’s March, recorded in recent times by The Gloaming among many others, and Allister’s Jig, which his wife is said to have performed, dancing “on a half door”, at his Cork grave.

But if that last detail suggests to modern ears that his widow was recovering too quickly from bereavement, MacColla’s death and the battle in general was also commemorated by a haunting slow air, Gol na mBan san Ár (“Lament of the Women at the Slaughter”), supposedly written by his “mother, foster mother, wife, and daughter”.

The air has been played by countless musicians in the centuries since. And it will take on a whole new life next week at the National Concert Hall when it inspires a remarkable collaboration between the South African-born contemporary composer Kevin Volans and the Waterford piping virtuoso David Power.

Their performance is part of the annual New Music festival, because new is what it will be.

Although also titled Gol na mBan san Ár, and inspired by the old tune, this will be the world premiere of a concerto, written by Volans for uilleann pipes and a full orchestra.

The result should be intriguing, at the very least. Power is a master of the traditional lament: the Sydney Morning Herald said of one performance that “his phrasing and meticulous employment of bent notes and timbal alternations cracked the heart of the tune wide open, making it unspeakably desolate, yet as beautiful as death itself”.

Volans’s music, by contrast, is variously described as “cutting-edge” and “post-minimalist”, while at least one poll has placed him among the “50 most important living composers”. On the other hand, he has long been an Irish citizen.

Indeed, like MacColla (if in somewhat happier circumstances) he now resides in Cork. So he rightly considers the uilleann pipes a “national treasure”. And the 20-minute concerto is his tribute, inspired by Power’s version of Gol na mBan: to which air, in the new piece, Volans makes repeated “reference”.

The story of how Power came to record the tune is itself fascinating. He owes his version to one from the late 19th century, still just about audible via Edison cylinder, by the Kerry piper, Micí Cumbaw O’Sullivan.  Although the sound quality is predictably dire, this was nevertheless a revelation for later musicians.

The late Willie Clancy, for one, admitted that had he heard it earlier in life it would have changed his style dramatically. But Clancy too will have an influence on next week’s premiere. The “chanter” part of his set of pipes was a famous artefact in itself, made in the 1830s by two Clare brothers, the Moloneys, after whom it is named.

The “18 Moloney” was later gifted to Power.  But by then it had been silent for decades from lack of a reed, and the challenge of making a new reed for it defied even the world’s best specialists until Power eventually found a solution.

The old pipes could then at last be heard again, and their sound when playing Gol na mBan san Ár was another revelation. It was the resultant recording that inspired Volans.

There remained major challenges in marrying the uilleann pipes with orchestral music. Alas, the 18 Moloney, which is pitched between B and B flat, would have been incompatible with the RTÉ National Symphony Orchestra and its concert-pitch tuning of A = 442 Hz.

So Power has to use a different set for next week’s performance. But such compromises mean that the latest collision of competing traditions on Knocknanuss (from the Irish for “Hill of the Fawns”) should be a more harmonious one.

The Volans concerto will provide the second half of the show on March 2nd. In the very definition of an eclectic programme, the RTÉ NSO will earlier perform work by a Korean composer, written for orchestra and Sheng, an ancient Chinese mouth organ.

1 All students will not return to school even if social distancing rules are relaxed – McHugh
2 Trump says, ‘I have the best words.’ Now this comedian’s going viral for lip-syncing them
3 We need to pay very close attention to what is happening in Britain now
4 What do you do when you meet a bear on a walk? Copy this 12-year-old
5 Emily Maitlis thanks BBC viewers for support after Cummings row
Real news has value SUBSCRIBE