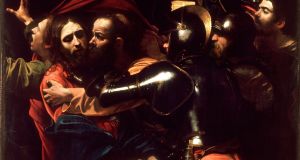 Caravaggio, “The Taking of Christ”. On indefinite loan to the National Gallery of Ireland from the Jesuit Community, Dublin

The subject of Walter Paget’s Birth of the Irish Republic, and the future obstetrician who appeared in it (Irishman’s Diary, November 26th), brought me by circuitous route to an even more famous painting, Caravaggio’s The Taking of Christ. Which, you might still think, has no connection with Easter 1916. But if you did think so, you’d be wrong.

Among the oddities of that great religious masterpiece is the dominant position – centre of canvas – it gives to a profane and apparently minor detail, the armour-plated shoulder of a Roman soldier.

In part, this is a vehicle whereon Caravaggio can show off the effects of light (as reflected on the metal) with which he revolutionised art.

More importantly, or so some critics think, the prominently placed glint is meant to suggest a mirror, in which viewers are invited to examine their consciences.

This being so, if Irish viewers look hard enough, they could probably see a reflection of the aforesaid Republic’s violent birth in the mirror. Because the chain of events that ended with the Caravaggio’s permanent loan to the National Gallery began in 1916, close to the GPO, in another place synonymous with maternity, the Rotunda.

That was where, on the weekend after the Rising, 250 rebels were held prisoner. It was also where, as some would testify afterwards, they were mistreated by the commanding officer, one Percival Lea-Wilson. A veteran of the Great War, where he had been wounded, Lea-Wilson considered the rebels even worse than the hated “Boche”, and treated them accordingly.

One of the indignities he inflicted was to refuse them permission to go to the toilet.

They had to relieve themselves instead where they lay, on the Rotunda Green. For this and other humiliations, Lea-Wilson became a marked man. And one June morning four years later, as RIC district-inspector for North Wexford, he was shot dead by at least one of his former prisoners.

Buried in his home city, London, he left a young widow in Ireland, Marie (née Ryan), born in Cork, who in time would become one of the country’s best-known paediatricians.

In her grief, she commissioned a Harry Clarke window, for Gorey’s Anglican Church, to commemorate her husband.

And while on holidays in Scotland, a year after his shooting, she also invested in another piece of religious art, The Betrayal of Christ, as it was called then, and attributed to a 17th-century Dutch artist, Gerard Von Honthorst.

We now know it was the Caravaggio. Sad to say, Marie Lea-Wilson was never to learn that. A few years later, she made a present of the picture to a Jesuit priest, in gratitude for his support after her husband’s death.

When she herself died, in 1971, it was still hanging in a Jesuit house in Dublin, still as a Von Honthorst. It wasn’t until 1990 that the National Gallery’s Sergio Benedetti was invited to have a look. The rest of the story is well known.

That the earlier chapter is now better remembered is one of the legacies of the year of centenary commemorations currently drawing to a close.

So was last week’s posthumous recognition of the GPO doctor, George Mahony, with a gold medal from his fellow obstetrician/gynaecologists.

And so was an event earlier this month when Anthony and Max Loder, Los Angeles-based descendants of the British general William Lowe, visited Dublin to recreate the historic photograph of Patrick Pearse’s surrender – a visit that in turn led to their extraordinary appeal on this page yesterday, urging the Government to ensure Pearse’s surrender letter remains in Ireland.

As for Caravaggio, who may himself have met a violent end 406 years ago, he can hardly have foreseen that his conscience-mirror might be gazed into as part of an Irish Republic’s centenary. But it was, sort-of, during the Rotunda Hospital’s 1916 exhibition.

The common thread between the three stories is Prof Chris Fitzpatrick, former master of the Coombe who, recalling the commemorations of the Rising’s 50th anniversary, had a personal motivation to make this year’s more inclusive. “Having been around in 1966, I wanted to tell some different narratives,” he says.

And he seems to have succeeded.

Certainly, there has been a lot more nuance this time, making for a richer pageant (and arguably, via acknowledgment of Mahony in the GPO painting, a richer Paget too).

And it’s only right that obstetricians should continue to take a strong interest. They were in at the Republic’s start, more or less. They share some of the credit for how the child turned out.

1 All students will not return to school even if social distancing rules are relaxed – McHugh
2 We need to pay very close attention to what is happening in Britain now
3 What exactly will happen in phase two of easing restrictions?
4 Trump says, ‘I have the best words.’ Now this comedian’s going viral for lip-syncing them
5 What do you do when you meet a bear on a walk? Copy this 12-year-old
Real news has value SUBSCRIBE