In July, two families a day were becoming homeless in Dublin 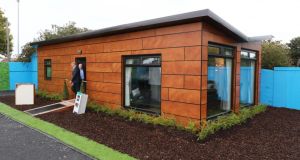 ‘While the modular housing units unveiled this week could make a significant contribution to alleviate the lack of emergency accommodation for families, they are not a substitute for social housing.’ Photograph: Nick Bradshaw

The problem of homelessness just continues to get worse and worse. The number of individuals presenting as homeless has been rising, month by month, for several years, with a record 4,668 people, including 1,383 children sleeping in State-funded emergency accommodation in July this year.

When Jonathan Corrie died in a doorway within yards of Dáil Éireann last December, there was a rush to provide further emergency accommodation to get people off the streets.

Funding for 271 extra beds was provided. However, within four weeks, these beds were all full and the numbers unable to get a bed at night and forced to sleep on the street began rising again.

Today they are back to the same level as last December. The fact that there is now no rush to provide yet more emergency accommodation suggests that the concern last December was less to do with people sleeping on the streets than with the political embarrassment over the death of a homeless person so close to where political decisions are made (or not made).

Most of the emergency, one-night only, accommodation available is an insult to the dignity of homeless people. It is almost all dormitory-style accommodation where drugs, aggression and bullying are rife.

Drug users also have a right to emergency accommodation. But to offer people who are drug-free a bed in such accommodation is unethical.

Indeed, what is the point in a homeless person bothering to become drug-free when the only accommodation they will be offered, after finishing a treatment programme, is a bed in a room full of drug-users?

Young vulnerable homeless people, including children leaving care, are terrified in those dormitories and often feel safer sleeping on the street.

The biggest complaint I get from homeless people is that they wake up to find the people with whom they were sharing the room have gone — and so is their money, their phone, their runners and anything else of value they possessed. But no one in authority seems to think that this is a problem that needs to be addressed.

Today, homelessness is accompanied by hopelessness – homeless people see no way out.

The exits out of homelessness are blocked; social housing is in very short supply and only 1 per cent of landlords will offer private rented accommodation to people dependent on the rent supplement provided by the State.

Becoming homeless today is no longer a temporary phase in a person’s life, but is likely to last a very long time.

Even more worryingly, the number of families presenting as newly homeless continues to rise relentlessly.

Dublin City Council has run out of hotel and B&B accommodation in which to house homeless families and tells them to go out and find accommodation themselves and, if successful, the council will pay for it.

Imagine a family who have been thrown out of their home in the morning, arriving at the homeless services in the afternoon, carrying all their possessions and maybe accompanied by small children, being told to walk around Dublin to look for a room in which to spend the night.

As rents continue to rise, and repossessions gather pace (with 54,000 homes and buy-to-lets in mortgage arrears of more than two years, it has been predicted that 25,000 repossessions will take place over the next few years), the number of homeless families will sadly continue to grow.

The vast majority of those now becoming homeless were never homeless before and never ever thought they would become homeless.

The solution is obvious but expensive: social housing – that is, housing under the control of the local authorities.

While the modular housing units unveiled this week could make a significant contribution to alleviate the lack of emergency accommodation for families, they are not a substitute for social housing.

Yet the Government’s social housing strategy continues to rely heavily on the private rented sector. To provide social housing for the 130,000 households currently on the waiting list would require an investment of €1 billion a year for the next 25 years.

We need to declare a national emergency. The problem of homelessness is now out of control.