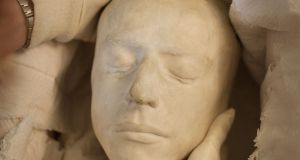 You might think a great poet would be allowed the last word on his own life, especially when leaving specific directions on the matter. But after John Keats died in Rome, 200 years ago next Tuesday, his friends decided that the prescribed, one-line epitaph needed editorialising.

To this day, instead of the director’s cut, the headstone reads as follows: “This grave contains all that was mortal, of a young English poet, who, on his death bed, in the bitterness of his heart, at the malicious power of his enemies, desired these words to be engraven on his tombstone[:] “Here Lies One Whose Name Was Writ in Water” Feb 24th 1821”.

Yes, the commas are eccentric. They also got the date wrong; he died on the 23rd. But as to the main theme, debate has simmered ever since about what the poet’s cryptic message meant and whether his friends were right in attempting to explain it.

The consensus then among his inner circle was that, while consumption was the official cause of death, Keats’s end had also been hastened by the harshness of critics, one in particular.

When his long poem Endymion first appeared in 1818, it was savaged by the Quarterly Review, whose writer claimed to have given up a quarter way through, although not before noticing that it aped another named poet’s work, except it was “twice as diffuse and ten times more tiresome”.

The unbylined critic was Galwayman John Wilson Croker, himself a poet (and MP) but of an older school then threatened by the new-generation romantics.

Byron and Shelley blamed the hatchet job on the Quarterly’s editor but, regardless of its authorship, shared the belief that it helped kill Keats, even if Byron also wondered in verse at such mental fragility: “’Tis strange the mind, that very fiery particle, should let itself by snuffed out by an article.”

The idea that Keats was a victim of the poetry wars as much as TB has not aged well.  But even those who wrote it grew to regret the gravestone version of events.

Keats had had three years to recover from the Quarterly mauling, after all, and it is a matter of record that he died in peaceful frame of mind, even as he was suggesting the epitaph.

Water was among the background noises of his final days, thanks to the fountain at the Spanish Steps, outside his sickroom.

We are also told that a quotation from an old play kept coming back to him – “ . . . all your better deeds shall be in water writ”. Rather than suggesting bitterness towards detractors, his epitaph might now look like philosophical acceptance at the shortness of his life and the passing glory of the world.

As it is, the gravestone’s complaining note is at odds with the beautiful, tree-lined, cat-haunted calm of the Cimitero Acattolico di Roma. For poetic grief, it is also put to shame by at least one of its neighbours.

The inscription on the grave of a teenage Rosa Bathurst is all the more poignant for not being poetry. Instead, her desolate mother first tells us that Rosa followed her father to an early grave.

Then, as if embellishing on what Keats’s one-liner may have meant, she adds: “Reader. Whoever thou art who may pause to peruse this tale of sorrow, let this awful lesson of the instability of human happiness sink deep in thy mind: If thou art young and lovely, build not thereon, for she who sleeps in death under thy feet was the loveliest flower ever cropt in its bloom. She was everything that the fondest heart could desire or the eye covet, the joy and hope of her widowed mother who erects this poor memorial of her irreparable loss. Early, bright, transient, chaste as morning dew, she sparkled, was exhaled, and went to heaven.”

By contrast with that small masterpiece, Keats’s gravestone came to be regretted as an “eyesore” and a “profanation” by those who had produced it.

As the poet’s posthumous fame rose, his friend Joseph Severn proposed a new version in the 1850s, dropping any reference to enemies, and stressing his eventual triumph:

“This grave contains the mortal remains of John Keats, a young English poet who died at Rome Feb 20th 1820 aged 25 years. This short life was so imbittered by discouragement & sickness that he desired these words to mark his grave: ‘Here lies one whose name is writ in water.’ Time having reversed this sentence his friends and admirers now inscribe his name in marble.”

The revised epitaph was never committed to stone, which may be just as well.

In a cautionary note to editors everywhere, it too had the date wrong.