Paris attacks: How West should move on from Islamic State outrage 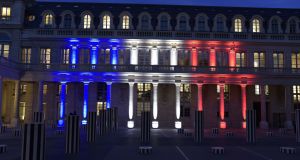 Paris attacks: An atrocity in a familiar place in a neighbouring country is always going to hit home in a way that will not be the case for a more remote place. Photograph: Adrien Morlent/AFP/Getty Images

After the atrocities in Paris, a lot of people are rushing to their keyboards. Some are understandably expressing empathy and solidarity with those who were killed or injured. Others express views, either of the “I told you so” variety, or call for revenge.

Others again ask, in light of the Beirut bombings earlier last week or the downing of a Russian airliner, why Paris is singled out for special mention.

Sufficient unto the day is the evil thereof. Many of us know Paris and have friends and family there.

An atrocity in a familiar place in a neighbouring country is always going to hit home in a way that will not be the case for a more remote place.

In my own case I also know Beirut well, and cannot but also feel for those who lost their lives there. But it’s a bit facile to convert reaction to the Paris atrocity into political whataboutery.

Let us grieve for a place we know; there is time enough for other people and other places as well.

To those who call for revenge, I would say “against whom?” and “how?”

The “West” has already shown its own double standards many times over, in a way which makes a mockery of any claim that “we” believe in universal human rights, or the notion that all men and women are equal.

Many of the issues we now face are due in some part - maybe in large part - to the murderous chaos and anarchy engendered by western policy in other regions in the first place.

It might help to stand back from the immediate atrocity.

(1) It is essential to bring about the soonest possible cessation of hostilities in Syria and Iraq. This will depend in part on some degree of mutual understanding between Russia and the US in the first place.

In the circumstances, each imperfect superpower is going to have to act in order to rein in its own imperfect clients.

Russia will have to “deliver” al-Assad, the US will have to leverage some of its influence with its new best friend, Iran, but there will also have to be some blunt talking with Turkey, which has played both sides and continues to adopt a deeply ambivalent stance towards Islamic State.

(2) People on the left have been far too silent about Islamic State, or Isis. This is a murderous group of antediluvian, misogynistic fundamentalists. Pacifism is not the answer here.

They must be confronted, by whatever means and wherever they can be found, but with absolute respect for innocent human lives.

If they are to be eliminated, the leadership will have to be taken out. At the same time, ordinary Sunnis must be offered some hope of a better way forward.

(3) One of the most difficult challenges of all is to take on those behind Isis. This means, not least, that Saudi Arabia and some of its allies, whose politico-religious philosophy is central to the entire problem, have to be tackled.

(4) There may have to be some territorial adjustments and population movements, including the situation of the Kurds. They were sold out after the first World War:this situation must now be redressed.

(5) The “West” urgently needs to reach out to mainstream Muslims. One obvious way of doing this, in the short to medium term, is by being generous towards refugees.

In a more general way, we need to reaffirm the notion that all lives have equal value and that people have the same right to live safe and fulfilling lives in Beirut and Baghdad as they do in Paris and Dublin.

(6) In due course, a ceasefire and rebuilding process will be rolled, out but these cannot be guaranteed by the great powers alone.

Concrete progress will also require dedicated professional peacekeepers from countries such as Ireland. This has the potential to be a very dangerous mission, but we and others can and should contribute.

(7) The EU has never been as disunited as now, in its policy responses and the solo runs of certain member states. It is imperative to construct and implement effective and concerted action in the Middle East, on the one hand, and more effective and respectful migrant integration within the EU, on the other.

(8) Understanding begins at home. Countries such as Ireland need a modern education curriculum that is fit for purpose, in particular for instance, in the teaching of world religions.

We need a debate to promote understanding of other cultures while emphasising core values.