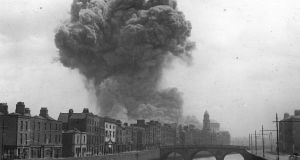 “On June 30th, 1922, the Civil War combatants destroyed a thousand years of documents, tracing the history of Ireland and its people, in one huge, cataclysmic explosion.”

When the dust had settled over the ruins of Sackville Street at the end of Easter Week 1916, down at the Four Courts, the deputy keeper of the records, MJ McEnery, found that despite the building being occupied and its contents disturbed, the Public Record Office of Ireland had escaped virtually unscathed.

Remarkably, the only irreparable damage was the loss of one will, that of John Watson, a private in the Royal Irish Regiment, who died in 1884.

However, the occupation six years later would not have the same happy outcome. On June 30th, 1922, the Civil War combatants destroyed a thousand years of documents, tracing the history of Ireland and its people, in one huge, cataclysmic explosion. In one great calamity, parish registers, wills, court records, letter books, deeds, census returns, marriage licences, land rentals, minute books and proclamations all rained down across Dublin city and county like so much confetti.

Some civic-minded people salvaged what they could and these remnants were gradually returned to the deputy keeper’s custody.

However, some of these fragments were held on to, by people who saw them as trophies of their “part” in the terrible event.

For instance, for decades, tucked into the baptismal register of Sandymount Presbyterian congregation, was the 1841 census return for the family of Florence McCarthy of Curranashingane, near Drinagh, in Co Cork. It had been found in the garden of the manse, on July 1st, 1922, but wasn’t returned to the Public Record Office (now the National Archives) until June 1993 – and I know because it was me who returned it!

It was this loss of so much of the paper trail of Irish history that galvanised some of the big guns in Irish genealogy, led by a Catholic priest, Fr Wallace Clare, to found the Irish Genealogical Research Society (IGRS) on September 15th, 1936.

Born in 1895, Clare had a lifelong interest in genealogy. As a youngster he was known as Bubbles, a name earned from sporting a head of curly chestnut hair. By middle age his hair was gone; in its place were shoulders snowed with dandruff and lapels weighed down with ash, rather like how Dublin looked the day after the calamitous fire.

Those in the IGRS with long memories can recall Clare’s tales of how he and his friend, Aubrey J Toppin, scoured the streets of Dublin after the fire, gathering up what they could. It was the horror at what had befallen Ireland’s public records that led Clare to imagine a genealogy society, the aims of which would specifically be to locate abstracts and transcripts of these lost records. It would be the world’s first society dedicated to the pursuit of Irish family history and genealogy.

Today, all these years later, Bubbles’s dream is a thriving reality. The IGRS holds the most important collection of Irish genealogical material in private hands. Much of the collection was compiled by men and women whose names form a roll-call of the top Irish genealogists of their day. Such people as Sir William Betham, Rosemary ffolliott, Michael Leader, Valentine Hussey-Walsh, Ian Smythe-Wood, Canon Henry Swanzy, and Major Herbert Blakeney, to name but a few.

Collectively, they’ve filled many gaps left by the destruction of 1922, through donating transcripts of lost material or by making authoritative contributions to the society’s annual journal, the Irish Genealogist.

Fr Clare could never have imagined how the internet would revolutionise access to the sources for genealogy, and indeed the IGRS has benefited greatly from it.

The society is marking its 80th anniversary through an ongoing programme to upload its collection to its website, irishancestors.ie. There can be found scanned images of manuscript materials, accompanying indexes and, additionally, a number of databases. The best of the databases is the free Early Irish Marriage Index, the brainchild of London-based, but Bandon-native, Roz McCutcheon. It notes supplementary sources for marriages in Ireland, filling the gaps in the official record. Launched in 2013, it is continuously growing, now recording the names of more than 180,000 brides, grooms and sundry relatives.

Irish Times columnist and high-profile genealogist John Grenham once described the IGRS as the “great-granddaddy of all Irish family history societies”, and while the irreparable losses of 1922 can never be undone, the IGRS has, over the past 80 years, made a significant contribution to filling the gaps, building on the work of Bubbles.