Oscar blunder worse for PwC than any audit scandal 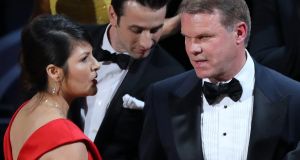 Brian Cullinan (R) and Martha Ruiz (L) of PricewaterhouseCoopers confer on stage after the Best Picture was mistakenly awarded to “La La Land” instead of “Moonlight”. Cullinan gave presenters Warren Beatty and Faye Dunaway the wrong envelope for the Best Picture Award, accounting firm PricewaterhouseCoopers said in a statement. REUTERS/Lucy Nicholson TPX IMAGES OF THE DAY

Nobody pays their auditor to make the headlines. That is one reason why the impact of PwC’s Oscars envelope mix-up may turn out to be as bad as that of any audit scandal.

PwC has apologised and is investigating what went wrong, but the group has just committed the auditing equivalent of a face-plant on the red carpet.

The group’s forebear Price Waterhouse was given the Academy Awards role in the 1930s. Since then, the professional services group has basked in the limelight reflected off the golden statuettes. Just before this year’s ceremony, Martha Ruiz, one of the two PwC partners responsible for tallying the votes and delivering the envelopes, told the BBC that the role is “something I cherish and take with a lot of responsibility”.

In the end, though, for all her explanation of the spycraft of the process - duplicate sets of envelopes, manual vote-counting and locked briefcases - this simple assignment is not about accounting prowess; it is about publicity. Ms Ruiz and Brian Cullinan, her colleague on the night, just reaped a world premiere’s worth of the wrong sort.

The four largest professional services groups - PwC, Deloitte, KPMG and EY - usually demonstrate an extraordinary ability to shrug off scandal in their core business. They tend to blame mis-steps on national or regional affiliates, while boasting about their global footprint, trumpeting their worldwide brands and lobbying hard against any disadvantageous regulatory changes. In any case, since the Enron scandal laid Arthur Andersen low, watchdogs have been reluctant to pursue any case that would risk reducing the Big Four to the Even Bigger Three.

The Oscars debacle is not in the Enron category. But the Schadenfreude of PwC’s rivals will be shortlived if the slip-up now prompts high-profile companies and organisations to reconsider other longstanding audit mandates. It took until 2014 for Barclays to tender a contract that one of PwC’s ancestors, Cooper Brothers, had held since 1896. BT is only now accelerating its review of PwC’s three-decade mandate to audit its accounts, following a damaging accounting scandal at the telecoms company’s Italian subsidiary.

The Academy of Motion Picture Arts and Sciences is a conservative body. But it should not need another excuse to schedule a casting call for the Oscars role, even if the job would probably go - like most blue-chip mandates - to another Big Four group. For now, though, the only auditors rotating are in their graves: Samuel Lowell Price, Edwin Waterhouse and William Cooper, the sober British accounting pioneers whose initials are on every Oscars envelope.

1 Parents jailed over female genital mutilation of daughter
2 Gardaí may have to wait days to interview mother of McGinley children
3 McDonald and SF candidates sign pledge to be guided by ard chomhairle
4 Border on Brexit: ‘Europe will look after Northern Ireland’s interests’
5 The notorious Donald John Trump goes on trial
Real news has value SUBSCRIBE