Orna Mulcahy: In defence of Starbucks

From opening 73 stores in Ireland since 2005 Starbucks have become a big player in the Irish coffee sector but their corporate tax payments have been surprisingly low. 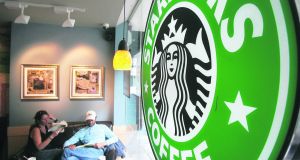 Some Dublin cafes have hit back the prospect of yet another Starbucks in the centre. Photograph: Alan Betson

Starbucks, oh how people love to hate you, and yet there’s always a queue at your tills. Every second someone somewhere in the world is forking out for an overpriced bucket of iced tea or a big fat mocha frappuccino with more calories than a Sunday lunch.

What’s to love about Starbucks? There’s a lot better coffee to be had elsewhere, you’ll find nicer-tasting biscuits down the back of your own sofa and as for that friendly thing of servers incorrectly scrawling your name – how hilarious! – on the side of your cup, well it’s all just a bit tedious, but still, but still, I like it. Show me an empty Starbucks leather armchair and I’m in it, though the chances are that someone will have beaten me to it, and set themselves up for the day with a thesis to write or a business to run.

Sometimes the café god smiles and that leather armchair, or better still that entire leather sofa, does fall free at just the right moment and then it’s yours, for as long as you like. I like that about Starbucks. It may be taking over our city centre, but at least it’s doing so with somewhere comfy to sit and decent wifi.

Yesterday, some Dublin cafes hit back the prospect of yet another Starbucks in the centre; a biggie that would occupy two floors on Crampton Quay on the south side of the Liffey. CoCo Café in Temple Bar handed out free coffee in protest and so did a Gallagher & Co on D’Olier Street. Ciaran Hogan who runs a livingroom style café on Wellington Quay, organised the free coffee initiative and told The Irish Times he was doing so in order, basically, to banish bland. “I don’t like it when everything is just bland and there’s no flavour and there’s no difference. When you go to a Starbucks in Dublin it’s just the same as going to one in London or wherever else.”

The staff, once they’ve finished mangling your name, leave you alone altogether and that’s appreciated, at least by me

Small cafes are the stuff of city life and Dublin is teeming with them: little artisan places that build up a great head of crema on an espresso or serve a pricey little cocoa nib energy ball. But a lot of them are tiny and comfortless – quick in and out places with the kind of furniture that doesn’t encourage lingering. It’s cute to perch on upturned slab of ethically sourced salvaged timber or hang out on the smoker’s bench outside, but not for very long.

Starbucks will let you slump, uninterrupted, without clearing your table with unnecessary zeal, or in fact clearing it at all. The staff, once they’ve finished mangling your name, leave you alone altogether and that’s appreciated, at least by me. Sometimes you don’t want the friendly barista banter. You just want a bit of peace and that counts when you are abroad too.

During a stint in New York this summer, I tried to find the tiny café in Greenwich Village where Patti Smith spent years writing poetry, but God it was hot and there was Starbucks winking at me with the air con blasting and giant cups of iced water for anyone who asked. I took to sitting at a particular table by the window that was semi hidden from the view of the cashier who I worried would think I was hogging space and not spending, but it turned out I was spending recklessly compared to almost everyone around me.

Towards lunchtime people would drift in, ask for water and then shamelessly lay out a packed lunch on the table and watch videos. The staff turned a blind eye and let them use the loo to boot. Starbucks has a lengthy code of conduct for staff and it’s based on courtesy to the customer. I’ve never see a Starbucks server being other than decent and attentive in all my time lurking in their cafes. Part of its huge turnover in takeaway coffees, teas and that stodgy lemon cake is covering a lot of free lunches.

In Chicago in winter, I’ve sat many times in a particular Starbucks, that has a fake flickering coal fire with sofas on all sides and newspapers scattered about for good measure. It opens at five in the morning and people drift in with all their belongings in carrier bags, sit down by fire and fall asleep without ordering anything. There are not many places that you can do that in the world, except, most likely in other Starbucks cafés.

In Dublin, I wanted to cry when Starbucks opened in the former Bewleys in Westmoreland Street but the two operations have something in common. Bewleys was a café for everyone and none more so than the Westmoreland Street branch where people with nowhere else to go could spend all day if they had the price of a cup of tea. Starbucks, bland and boring as it is, offers the same welcome.